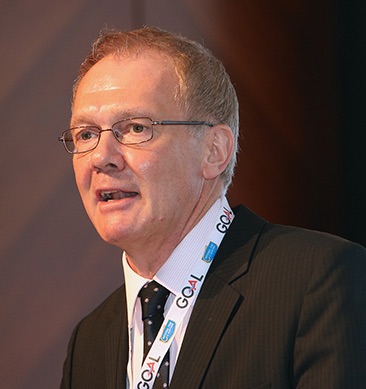 Presenting recently at GOAL conference, in Vancouver British Columbia, President and CEO of Calysta Inc, Dr. Alan Shaw, stated that “the world will require more food production in the next 50 years than in all human history”.  And he believes his California company and FeedKind Protein – a non-animal based, naturally sourced protein this company produces – has a role to play in increasing sustainable food production.

admittedly has “very little aquaculture experience” has taken on one of the industry’s main challenges – sourcing sustainable alternatives to fish meal for feed production.

He described himself as a “serial entrepreneur who matches innovative processes and technology to industrial needs” producing a marketable commodity.  With his pharmaceutical chemistry and commercial biotech background he has a vision that a cheaply produced protein with a similar profile to fish meal could play a key role in ramping up aquaculture production to feed our growing population.

Calysta is a biotech company developing the technology to produce high quality protein with yeast cells and using methane as a carbon source. The company, with operations in USA, United Kingdom, Norway and Singapore, is not Shaw’s first enterprise – he has developed and sold two biotech companies in the United Kingdom and in 2010 took the greentech company Codexis, developer of biocatalysts for drug and biofuel production, public on the NASDAQ.

protein in fish feed.  “Salmon are very picky about the amount of plant based protein in the feed” stated Shaw “this (FeedKind) protein looks identical to fish meal.”

A proprietary natural fermentation process is used that includes a one meter diameter stainless steel pipe providing the fermentation platform where live Methyloccous (yeast) cells convert methane into protein within the cell walls with water as the by-product.

In 2011, FeedKind protein was approved for use in feed for all livestock, including aquaculture, in Europe and a small facility in northern Europe is producing protein for research and to obtain approvals in other countries.

The path to commercialization of a new product requires many factors to align. Shaw explained “the process of converting fuel (natural gas) into food was first developed in the 1980’s in Norway by the oil and gas industry but at the time the cost of natural gas was too high to make the production cost effective.  Methane is now one of the cheapest sources of carbon on the planet and this makes the production of FeedKind protein also cost effective.”

Shaw purchased the rights to the known and tested bio-protein production process, secured financing and partnered with a California R&D company to develop the commercial production technology.  During the scale up over 3000 tonnes of the protein was sold to EWOS for applications in aquaculture.  The next phase includes a production facility in an area where natural gas is plentiful and inexpensive. At a US location yet to be determined, a proposed commercial scale plant will produce 80,000 tonnes annually by 2017-18.

As Shaw noted “ten 100,000 tonne plants worldwide will barely scratch the surface of what is needed.”

Potential future revenue models for the company include licensing of facilities or technology for a royalty and/or establishing long term relationships for purchase of the bio-protein.

Shaw is first and foremost a business man and the project needs to meet commercial criteria of “efficiently, cost effectively, and sustainably addressing an established need.”

He points out that the risks of bringing production to commercial scale are now low as “the technology has been developed, the market exists, the company has the right expertise, and the momentum for FeedKind bio-protein is building”.

Also the gas fermentation platform can be used to produce a range of products, including protein for livestock feeds, but for now Calysta is focussed on the aquaculture.  In his presentation in Vancouver, Shaw stated that he sees “FeedKind becoming the industry standard for fish feed protein”.