More than a hobby farm 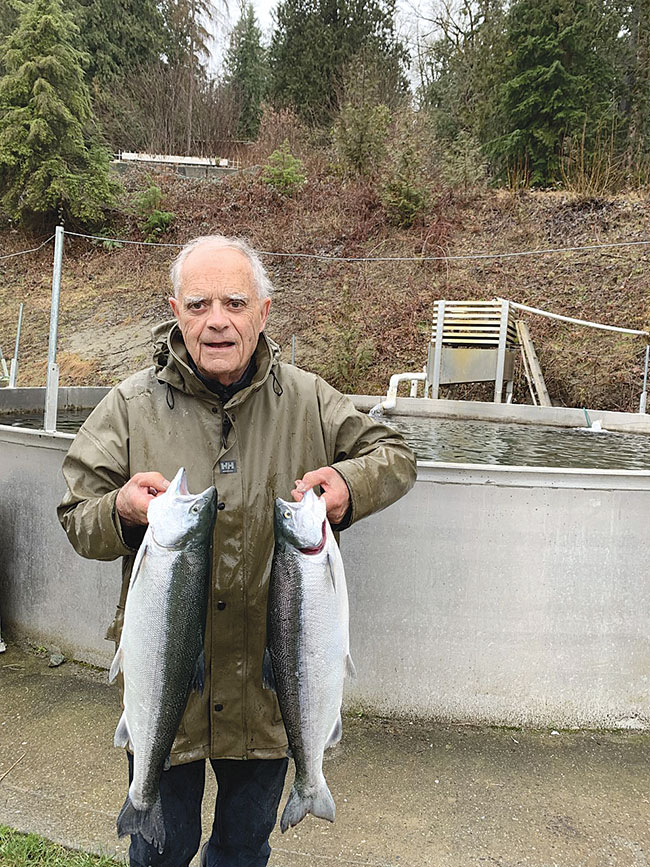 Things are looking up for Larry Albright.

“The farm is profitable,” the retired university professor replies when asked if the farm he co-owns in Langley, British Columbia, has moved past the hobby stage. He adds that he is now setting his sights on increasing the farm’s capacity, expanding its market, and making it more profitable.

But that’s getting ahead of the story. How he got to where he is makes for an interesting narrative.

“The farm started in 1985, and it’s been through three owners,” recalls Albright. “The farm is called the Richard Henly Fish Farm. Richard and his wife own the land, but the operation is between my company, which is LSL Living Seafoods Ltd, and Avalon Aquaculture, 50:50.”

To say that Albright is passionate about farming sockeye (Oncorhynchus nerka) would be an understatement. For the past two decades, he has been working on growing sockeye while teaching full-time at a local university. There were eight others in BC who also tried to farm sockeye in the late 1980s. They all failed, including Albright. But he kept at it.

“We have three main products: market-size rainbow trout; rainbow trout fry weighing 0.2 to 0.3 gram each for environmental testing; and sockeye.”

The farm imports 20,000 rainbow trout eggs every month from Troutlodge in Washington State. The juveniles for environmental testing go to clients in British Columbia, Montreal, Alberta, Manitoba, and Quebec. The others are grown to market size and sold as foodfish to the local market.

“We start growing them in these tanks here,” says Albright, pointing to the 15 tanks in the hatchery. “We ship them across Canada for environmental testing. Environmental companies test the waters and sediments for toxicity. So what they do is take containers, and they put the potentially toxic material in the containers and observe the fish’s mortality.”

For the foodfish, the farm’s specialty is 2-lb fish, which Albright finds to be the most efficient size to grow. The fish are sold under the brand Fraser Valley Sustainable Seafood.

“We can’t produce enough rainbow trout right now. We sell them to One Fish, Two Fish, and to F.i.s.h. in Market Crossing as two-lb fish, sometimes a little bit smaller.” 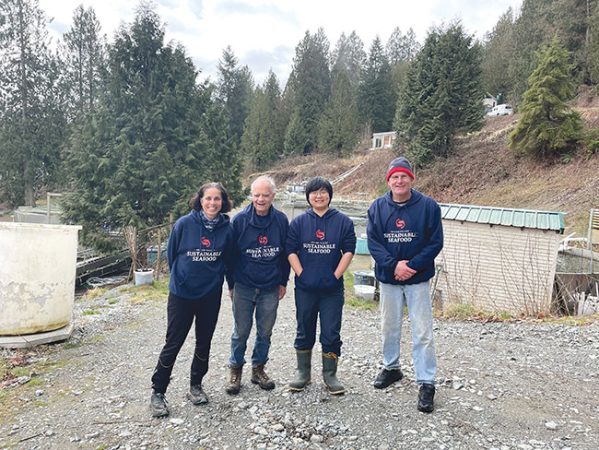 The sockeye potential
The farm’s sockeye production will go to the market in the next few weeks, which will be “the true test of the market,” says Pablo Rodriguez, the Vancouver-based president of luxury food distributor Mikuni Wild Harvest.

Mikuni is the farm’s first client. The company first market-tested the farm’s sockeye production in the summer of 2020, but developing the market for the product at that time was difficult because of the pandemic, Rodriguez says.

“It’s a matter of developing the market (for sockeye). It’s been difficult because of covid, right? Chefs go: ‘How do I put this fish in a take-away container and still have that taste that I am trying to portray on a plate in the restaurant?’

“What I believe is going to happen is, by mid-May, we’re going to know if anything Larry has can be sold. But I believe it will be. I don’t see why not. Price-point-wise, quality-wise, and the story of the fish being grown in pristine waters from Mount Baker give the fish a pristine aura,” he says.

Indeed, Albright suspects that the water feeding into the farm is from an underground stream from Mt Baker in neighbouring Washington State.

“There’s this whole hillside from about a kilometre that way. We intercept the water. It comes off from artesian wells. There are no pumps on this farm – it has its own pressure, so it gushes up very nicely.

That water is re-used three times: first in the hatchery, then in the tanks, and lastly, in the pond.

“We have four wells on the farm here, and the water is pristine. It comes off without pathogens, no virus, bacteria, or fungus that we can detect, and it goes right in these tanks and we get no mortality at all (for rainbow trout). As far as the sockeye, they grow in the first and second year, then in the third year they begin to express mortality. If we put about 2,900 in the tank, we get about 10 dead, maximum,” says Albright.

Rodriguez believes in the farmed sockeye’s potential to develop a niche market. “Over the next five years, I think sockeye will have a very nice place in the industry. It’s a better-quality fish. I really believe that. It’s a much prettier fish. But so is the Atlantic salmon; it’s a beautiful fish as well. It’s tough to knock one over the other because the farmers have done a great job. The Atlantics have different size ranges, which is a big attribute because some guys want big fish, while other guys want small fish. So if you’re a guy in the sushi bar space, you want to have the range both big and small. That’s one thing that sockeye hasn’t been able to achieve yet. But, as Larry becomes better at what he does, it will have a growth space.”

The question now is whether the farm can consistently produce large sizes and whether it could produce various size ranges. There’s also the question of color and taste, which Albright acknowledges need to be tweaked.

“The flesh is not as red as the wild sockeye, and they don’t taste like the wild stock because we don’t have the feed the wild sockeye has. The diet of sockeye in nature is a lot of crustaceans, which have a lot of astaxanthin,” Albright says.

Rodriguez isn’t worried about the sockeye flesh lacking the redness of its wild counterpart. He says it’s a matter of educating customers. “As we’re educating the customers about the story, there is definitely no rejection of the product.”

Albright is confident that the sockeye will be coming into profitability as sales improve. However, as any business operator poised for expansion knows, it takes money to make money.

“We’re increasing the efficiency of production of both trout and sockeye on this farm. All monies received from sales are immediately put into farm construction, as there are two ponds and four tanks more to install,” he says.

But he knows, too, that he wants the farm to reach the capacity it is licensed for. “It’s a joint business between two families. When we reach 50,000 lbs per year, that will be it,” he says.