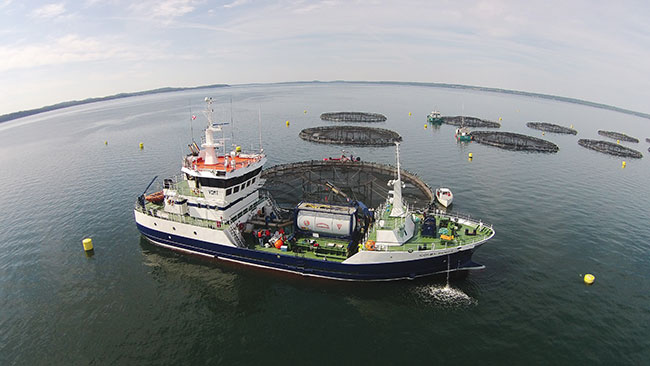 If there’s any positive repercussion coming from the COVID-19 pandemic, it could well be the realization that aquaculture plays a vital role in Canada’s food security. That, in a nutshell, is Susan Farquharson’s silver lining take on the pandemic’s impact on Atlantic Canada’s farmed fish industry.

The executive director of Atlantic Canada Fish Farmers Association (ACFFA) said agencies from all levels of government and business quickly adopted an all-hands-on-deck approach and worked together to protect the industry. These allowed fish farmers to weather the pandemic’s initial blow, power through subsequent challenges and even prepare for post-COVID growth.

Statistics Canada’s 2019 salmon production numbers for the Atlantic region are at 55,000 tons. “We don’t have the official numbers yet for 2020, but I expect that numbers did not change much. Our outlook for the industry here is strong,” said Farquharson.

Government support
“Very early on, our industry was deemed an essential service,” says Farquharson. “This granted us certain exemptions that allowed our employees and supply chains to operate and move through provincial and US-Canada borders.”

In June this year, ministers responsible for aquaculture in the Atlantic provinces also signed a memorandum of understanding to continue working together for the industry’s growth.

“This partnership solidifies our collective commitment to align regulations, policies and standards between our provinces as well as to enhance the legislative landscape,” says Margaret Johnson, New Brunswick’s minister for agriculture, aquaculture, and fisheries. “This work will provide the industry with a clear, predictable and consistent framework in which to operate.”

A month later, the federal government announced the release of $10 million to assist the province’s fish and seafood processing sector. The funding is meant to help businesses adapt processing operations with new equipment, materials, and modify the workplace to improve employee health and safety.

“These investments will help the sector adapt to the new realities of COVID-19, bounce back from the pandemic and play a leading role in our economic recovery,” said Dominic Leblanc, minister of intergovernmental affairs.

The main challenges faced by New Brunswick’s salmon farming industry continue to be access to skilled or trainable workers and climate change.

The pandemic has made it doubly hard for companies to find new hires. For instance, in 2020, the province’s major employer, Cooke Aquaculture launched a media campaign to entice New Brunswickers to fill 100 vacant positions.

The elements have always been a critical factor when it comes to farming salmon offshore. However, record-setting, higher water temperatures are wreaking havoc to aquaculture operations. Warming ocean waters do not only stress out salmon, but they also worsen the impact of sea lice on the fish.

Relief thru tech
To reduce dependence on labor, companies are turning to robotics, sensors, and advanced feed systems that require less human intervention and presence in sea farms. Companies are also looking to cutting-edge fish-farming tools to help them deal with sea lice issues, according to Farquharson. “This industry is always learning, investing in new technology to grow better, to grow sustainably.”

The ACFFA executive also foresees the increasing use of land-based recirculating aquaculture system (RAS) facilities for post-smolt rearing. Fish will be grown to much larger sizes in land-based facilities so that their exposure to risky elements in marine environment will be cut in half.

“This is important because it is in that marine environment where we are seeing unpredictable climate change events, whether it’s warming water or less dissolved oxygen or whatever,” she says.

There’s still room for growth but fish farmers may have to look somewhere else apart from the sea.

“From a marine-based perspective, the area is pretty saturated,” Farquharson commented. “Growth in New Brunswick will have to be post-smolt facilities in land-based systems… so we can grow, and make better use of our existing marine farms.” She refers to the latter as “boundary amendment.”

“There may be some farms that we will be able to make bigger as we use other farms less and less,” she explained. “…Boundary amendment simply means we incorporate a larger area to farms we find more efficient than others.”

Such a move would be a large undertaking for salmon farmers. It will be much like building a new farm and going through a new round of environmental assessments and regulatory processes both provincially and federally. Will producers go for it?

“It is a big undertaking. I can’t speak for all producers, but they are always looking to the future,” said Farquharson.