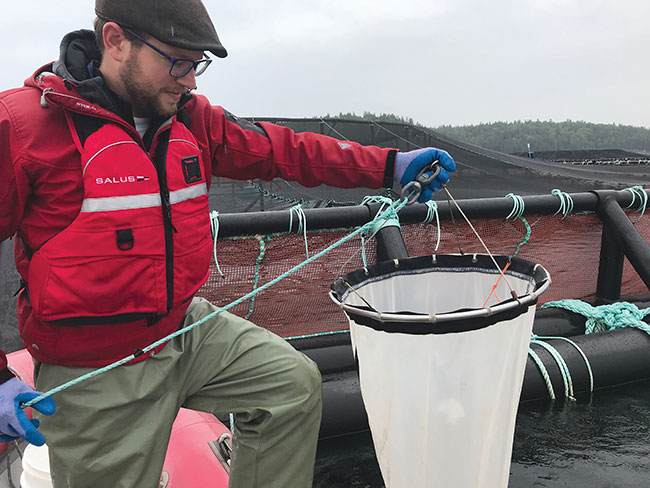 Biologist Jonathan Day gears up to collect larval sea lice around salmon farms in the Bay of Fundy. He is studying the parasite at larval stage

Sea lice are a common challenge in the farmed salmon industry but there is still much to learn about them. Dr Shawn Robinson, marine ecologist with the Department of Fisheries and Oceans’ St Andrews Biological Station (SABS) in New Brunswick, Canada, has spent much of the past 10 years working towards improving industry understanding of sea lice to inform how to deal with them without the use of chemicals.

One treatment devised at SABS is a warm-water shower to lull the lice into a sleep-like state, causing them to detach from the host. Salmon farmers have been using a thermal water treatment method over the past five or six years and have seen it remove as much as 95 percent of sea lice from the host fish. But while the warm-water bath treatment had minimal impacts on healthy fish, fish with health issues didn’t do as well, noted Robinson.

“We’ve found that if the fish were really stressed and in poor physiological shape, it pushed them over the edge,” says Robinson.

A related research is selective breeding of sea lice. SABS researcher Hannah Bradford aims to find out if sea lice could develop resistance to warm-water temperatures. She’s growing the fourth generation of sea lice at the lab and plans to raise as many as she can for the length of the project.

Sea lice are a naturally occurring parasite found on marine fish. Biologist Jonathan Day is studying sea lice during larval stage. He is looking at larval distributions of sea lice around farms, and has found that sea lice larvae move closer to shore until they mature and metamorphose into the infective stages. This knowledge enables scientists to examine the oceanography of the area to get an idea of how far a newly mature sea louse could travel on a tidal excursion.

Day is also examining how sea lice actually attach themselves to their hosts. Robinson says there are notions that “lice jumped on the side of a fish as it swam by.” “That’s probably like you or me trying to get on a plane as it’s taxiing down the runway,” he says.

Day’s research suggests that lice are caught up in a fish’s gills when it draws water into its mouth. Further, when that water is expelled from the gills, it will run down the side of the fish, providing ample opportunities for a louse to attach itself to the fish. Day is nearing the end of a three-year tenure with the lab and is currently preparing a paper on his findings.

Robinson believes that their research will help industry and government in making informed decisions on sea lice, and salmon farming at large.

“If you have no information on a subject that you’re trying to manage, you’re forced into a precautionary approach,” says Robinson. He says taking the most conservative approach possible doesn’t always lead to the best management outcomes.

“By having more information, one can make a much more optimal decision. Those objectives may differ between government and industry, but this type of research is critical in managing our natural resources.”