New kid on the block

With a background in engineering and several years in aquaculture, Matt Clarke noticed the lack of innovative technical solutions and support services in the industry. To address that need, British Columbian Matt and his wife Heather Clarke co-founded Poseidon Ocean Systems in 2015 – a full-service aquaculture engineering and support company that specializes in infrastructure design, development, supply and installation. 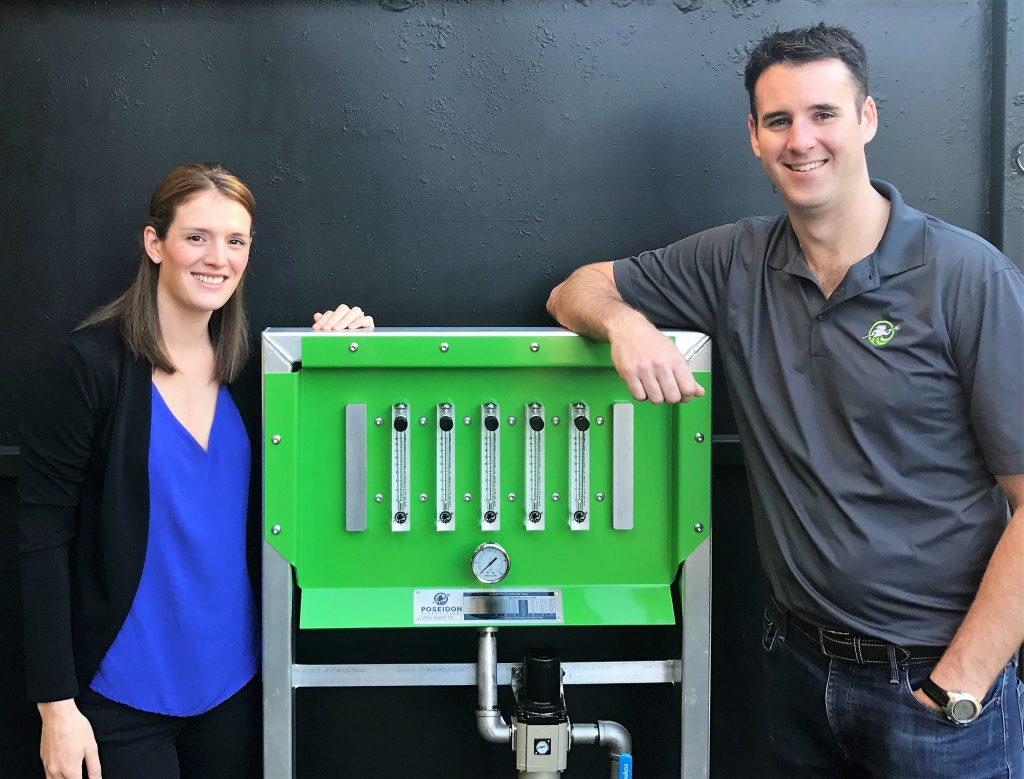 “We always had an entrepreneurial mindset,” says Matt, speaking from his office in Campbell River, BC. “We’ve always kept an eye out for opportunities and then at the end of 2015, the time seemed right. What I saw from an engineering standpoint was there was a lot of room for technological innovations and a need for support services in the industry.”

Matt observed that many existing solutions have been developed in countries that may not necessarily face the same challenges as Canada. Matt cites predators on marine farms as an example of a problem specific to North American producers. In response, Poseidon Ocean Systems developed custom injection molded accessories that bolt onto cages to facilitate predator prevention or mitigation.

The husband-and-wife team wanted their company to have the flexibility to develop solutions for various operations.

“We focus mostly on solving problems in marine aquaculture,” says Matt. “Some of them are pretty generic stuff. For instance, we design and supply mooring systems; that’s really one of our core businesses. We also supply HDPE (high-density polyethylene) pen systems to the Canadian industry. But we’re not just suppliers. We innovate or develop customized solutions. Our attitude is if we can’t add value to it, we’re not interested in doing it.”

Poseidon Ocean Systems has a diverse engineering team that develops custom and proprietary solutions. They come from diverse backgrounds, such as structural engineering, biology and naval architecture.

“The head of engineering for our life support and our aerated oxygen distribution has experience as a plumber before he became an engineer, so he has experience working with compressed air systems,” says Heather. “Another team member is a certified millwright and he actually has farming experience, which helps.”

Matt says there is an apparent lack of engineers in the marine aquaculture industry in North America. He has seen more engineers in hatcheries or in the waste-water treatment side of the industry, but not as much in marine aquaculture. “There’s a serious lack of experience in everything from designing fence systems to understanding the rigging of a net pen,” says Matt. “We train people.”

Poseidon Ocean Systems’ team frequently visit clients’ sites free of charge to ensure that their solutions and devices can be easily adapted into a particular system. It’s what Matt calls “integration,” another focus of the company.

“We’re not a consulting engineering firm,” says Matt. “We don’t charge consulting hours or time. While we’re interacting with farmers, we look for other problems to solve. Then we’ll take those problems back to the shop and we’ll work on solving them. If you resolve one person’s problem there’s three or four others who have the same problem and they’d love to have it solved too.”

“We don’t want the customer to fear calling us when they have a problem for fear of getting a big consulting invoice,” adds Heather. “We’d rather take that phone call and try to help them with their problem and develop a solution for them rather than to nickel and dime them.”

One of the key challenges is the company’s small size. Heather says it is difficult to know when to scale up operations. She and Matt were the company’s only staff during their first year of operations. They began putting together their engineering team in preparation for contracts in the spring of 2017.

“The difference between last year and where we are right now is very dramatic,” says Heather. “We brought on, I think, a pretty incredible team but from an owners’ perspective there’s so much risk. We brought on this team to support an industry that we believe in and support customers that we believe in. We’ll see if our gamble pays off. Scaling up a family business to this size is not without risks.”

But being small also has benefits, notes Matt.

“Because we’re small, we’re very nimble,” says Matt. “We go out, we see a problem and a couple of weeks later, there’s a solution on the table.”

The company recently opened an East Coast office. If all goes well, eastern Canada will be a gateway to the international industry for salmon and other aquaculture species. Amidst the company’s expansion, Matt says they make sure customer service remains the focus.

“That’s what we’ve started with,” says Matt. “Last spring a customer with an issue phoned us. We were on a chartered plane in an hour-and-a-half from the first phone call. We had two engineers on-site within three hours of the original phone call, dealing with their issue, working until after dark to make sure everything was running as necessary.”