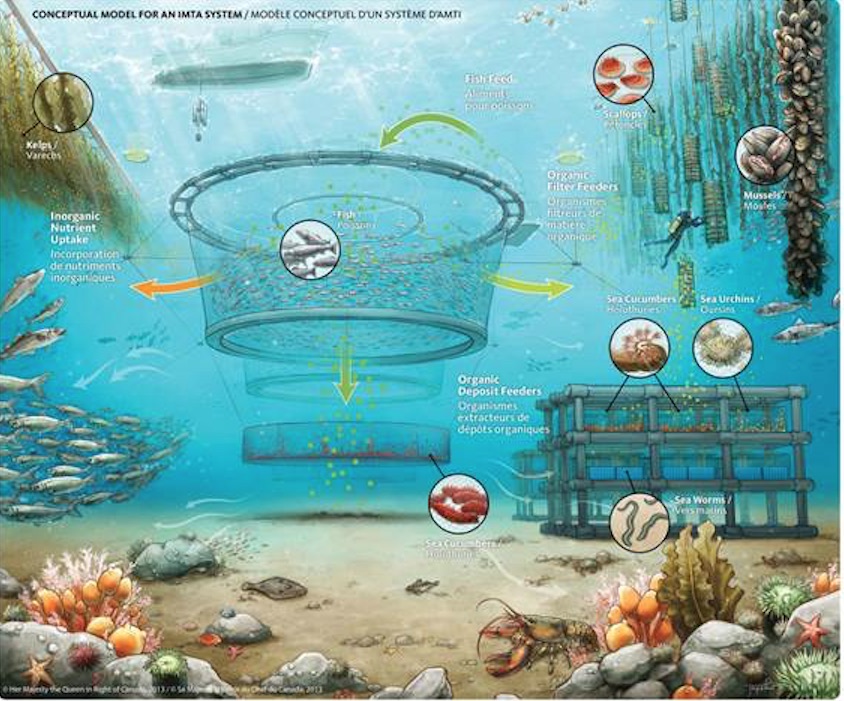 The ocean is uniquely positioned to feed the world, says scientific paper. Image courtesy of Fisheries and Oceans Canada.

Farming seafood in the open ocean could contribute significantly to food production given the right policy support and incentives, according to a scientific paper called The Future of Food from the Sea.

Open-ocean aquaculture, also known as mariculture, is underutilized but it could produce six times more food than it does today, “if we make rapid and far-reaching changes in the way we manage ocean-based industries while nurturing the health of its ecosystems,” the paper suggested.

It estimated the projected boost in production from the ocean to being equivalent to roughly 70 percent of the animal protein needed to feed the future global population.

“As the global human population grows and average incomes rise, the demand for ocean-derived food will continue to increase. By some estimates, nearly 500 million metric tons of protein will be required to feed the global population in 2050 — food from the sea has a large potential to meet the majority of this need,” it said.

It says fast tracking the development of feed that do not rely on fishmeal and fish oil is needed to sustainably expand finfish and shrimp mariculture.

It also endorsed the farming of bivalves and seaweeds, which unlike finfish and other species, do not need to be fed; they even clean the water and “may in some cases enhance wild fisheries by creating artificial habitats.”

World leaders should improve ocean governance, carefully considering the “scientifically informed pros and cons” associated with different policy options and how these may affect stakeholders. It also stressed that actions and reform within the fisheries and aquaculture sector are vital.

The Future of Food from the Sea is authored by a group of scientists in support of the coalition of 14 world leaders committed to support the UN’s Sustainable Development Goals. The coalition, which calls itself the High Level Panel Advisory Network, has as its members Australia, Canada, Chile, Fiji, Ghana, Indonesia, Jamaica, Japan, Kenya, Mexico, Namibia, Norway, Palau and Portugal.