Distribution arrangement with other farms is rewarding for all involved

Glidden Point Oyster Farm was established in Edgecomb, Maine in the late 80s by husband-and-wife team, Kevin and Barbara Scully. General Manager Jonathan Turcotte, who joined the company after Barbara had assumed sole control of the company, says the farm is known for high-quality bottom-cultured Atlantic oysters.

In 2016, the company was sold to current owner Ryan McPherson, under whose leadership the operations took a more growth-focused approach, expanding operations on their lease sites and their distribution network.

“Barbara held about 30 acres of lease sites on the Damariscotta River, which has some premiere growing areas,” says Turcotte. “We looked at the whole landscape of the farm and started looking at how to maximize its potential –  the landscape and natural geography of the farm and the growing areas, what they have to offer, and then looking at really maximizing what we can get out of it.”

Over the past few years the farm has been improving their seed-growing and retaining practices. Instead of acquiring additional acreage for the farm, they have been converting some leases that had previously only been bottom culture to also have surface-culture capability. This will allow them to raise more juveniles more effectively and reduce mortality rates.

Glidden Point’s operation spans three major sites. They progress naturally as one follows the river downstream. At the most northern site, at the head of the river, lies the company’s eight-acre nursery, stocked with soft mesh bags and oyster grow cages. Turcotte notes it’s the perfect location as it has the warmest water in the river, is very nutrient-dense and has good tidal movement. A few miles south of that lies a bottom-culture site off the shore of a small island, followed by an unused site that will be developed later for surface culture.

“We start up at the top and move them all the way down until they come home to our main headquarters where we have offshore wet storage floats connected to our dock,” says Turcotte. “We get product off the bottom; it comes back to our headquarters where we process it and wet-store it until we bring it to market.”

Additional revenue stream
The company’s headquarters houses a small retail store with a patio where raw oysters are served along with beer, wine and snacks. Unshucked oysters are also sold there. 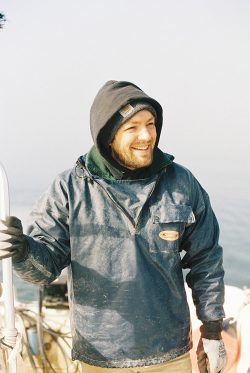 “That has been another great way for us to bring our oysters, and oysters from other farms, directly to the people.”

Acting as distributor for other oyster farms in Maine started out as a small part of the company’s business. That role has grown since McPherson acquired the farm. The arrangement is a win-win, says Turcotte, as it enables the farms to focus on growing the best product they can.

For Glidden Point, it’s an additional income stream and more: “It’s given us an opportunity over the past couple of years to really focus on making sure that we’re growing our oysters exactly how we want to, knowing that there’s another side of our business that supports everything that we do.”

The company now distributes products from roughly 30 shellfish farmers in Maine – from small to large farms – including farmed scallops and mussels.

Turcotte sees this as a way to help the state’s industry at large, “but especially those that share the same waterways as us.”

The company sells direct to the customer online, which exploded due to the COVID-19 pandemic, and to restaurants and chef programs.

“The market that we’re selling into has been a total roller coaster, but we’ve been able to hold pretty steady thanks to that diversification,” he said.