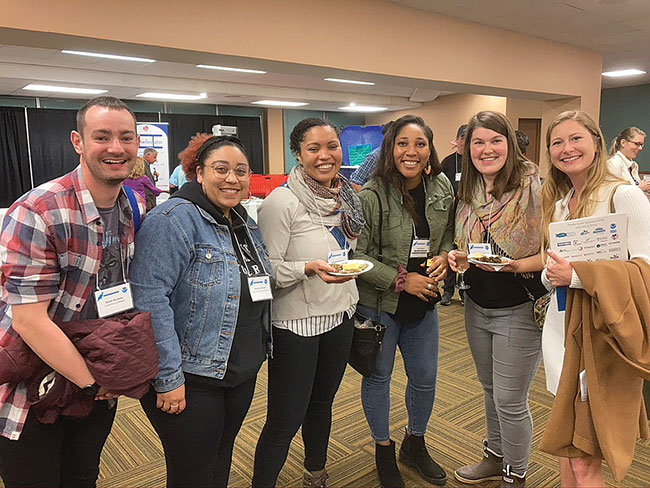 Following a cancellation and then a postponement due to COVID-19, the gathering celebrated advances in science, an influx of attendees under 30-years-old, and just the plain, old value of meeting face-to-face.

“The thing about this conference is the conversations that go on between people,” said Gef Flimlin, professor emeritus of Rutgers Cooperative Extension, who has taken part in the event since it launched in 1998. “I’m always asking, ‘What’s going on with you? What’s your crop? Did you know that’s the area of research of so-and-so?”

This year the biennial aquaculture conference was held jointly with the 41st Milford Aquaculture Seminar, an annual forum for researchers to exchange findings with the industry. “The level of science has risen incredibly,” noted Dr. Gary Wikfors, who has attended every seminar since 1975 and now serves as chief of the Aquaculture Sustainability Branch at NOAA Fisheries Service in Milford, Conn.  He pointed to the “sophistication” of work in molecular biology, emerging technologies, and new products for growers.

For example, among the 35 sessions on shellfish, seaweed, and finfish, there were panels on selective breeding programs for hard clams and sugar kelp which tapped genomic sequencing. “We have sequenced the whole genome for some 300 parents and tested their crosses,” noted Scott Lindell, as he described three years of kelp investigations conducted by the Woods Hole Oceanographic Institution.

Technology highlights included a portable kelp dryer and an artificial intelligence-driven tool to alert shellfish growers of toxins.  Concerns about marine mammal entanglement, the leading cause of mortality to large whales in the U.S., were addressed with product initiatives in ropeless technology for bivalves and an on-bottom growing structure for kelp.

Plastics pollution was also on the agenda, with a company called Ocean Farm Supply presenting a biodegradable cellulose bag to replace the plastic mesh, which is standard for shellfish harvesting and distribution. The U.S. is the largest producer of plastic waste in the world, said Abigail Barrows, a marine research scientist who is pioneering non-plastic equipment for her own oyster farm in Maine. 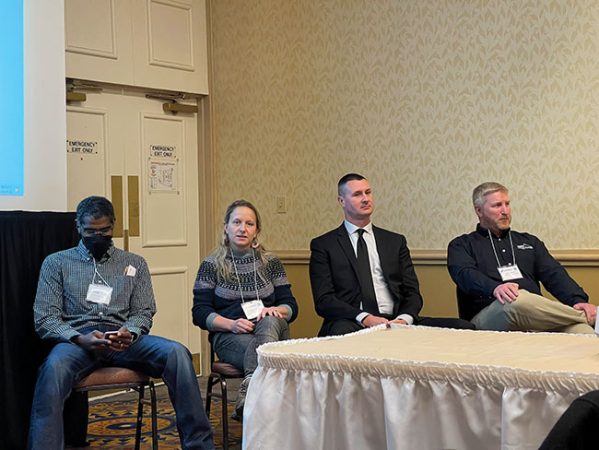 (Left to right) Dr. Theo Willis of the University of Southern Maine, Megan Sorby of Kingfish Maine, David Noyes of Nordic Aquafarms, and Greg Lambert of Cooke Aquaculture contributed to a session on Maine-based aquaculture and aquaponics.

“We can get this solved,” said Matt Will, addressing the challenge of marine plastics later at the exhibition booth of SEAPA Group, a global supplier of shellfish aquaculture systems. “The conference was grounded in useful information, with the community coming together to share.”

Though shellfish production dominated the conference, almost twice as much session time was devoted to seaweed topics compared to 2019. “It’s gained a lot of traction,” said Flimlin, who also serves as treasurer of the East Coast Shellfish Growers (ECSG).

But the “shiny new object” among species this year was sea scallops. Though the US lags China, Japan, Peru, and France in scallop aquaculture, the northeastern states have a high-value wild scallop fishery and a burgeoning interest in farming the species, especially in Maine where an exchange with Japan to learn about its techniques dates back to 1999.

In pursuit of such an opportunity, this year’s NACE showcased research on larval culture techniques, technology that identifies scallop DNA in marine water samples, and a pilot to test different grow-out gear positioned at varying depths in the water column.

A focus on finfish came during a panel on land-based aquaculture, featuring representatives from Cooke Aquaculture, Kingfish Maine, and Nordic Aquafarms, as well as Canopy Farms, a Maine-based aquaponics greenhouse.

RAS technologies are rapidly evolving. Noyes noted that Nordic Aquafarms’ facilities themselves will be different in Maine and California.  The implication for a workforce is that it will be more important to find people willing to learn, rather than trained in a single technology. “Basically, we are looking for intelligent, observant, hard-working, reliable people,” he said.

Controversies around aquaculture spawned sessions on social license and public engagement. Brianna Shaughnessy of the University of Massachusetts presented compelling survey results demonstrating how more familiarity with aquaculture creates more favorability. Public opinion is “surprisingly malleable,” she said. Scientists, aquaria, and seafood farmers are the most trusted messengers, according to one survey.

A new vibrancy also marked who attended NACE. This year, a happy hour for women and minorities topped off the first day of sessions. “There are a lot of young people getting into aquaculture,” said Chris Davis, who has led the Maine Aquaculture Innovation Center since 2004 and serves as the NACE conference manager.

“I’m so overwhelmed in a good way at the level of content and enthusiasm.  It brings some optimism back to me,” said Jeannette Watson, an architectural designer who recently moved to Portland, Maine. She is contemplating a career in aquaculture because “it’s relevant to climate action.”