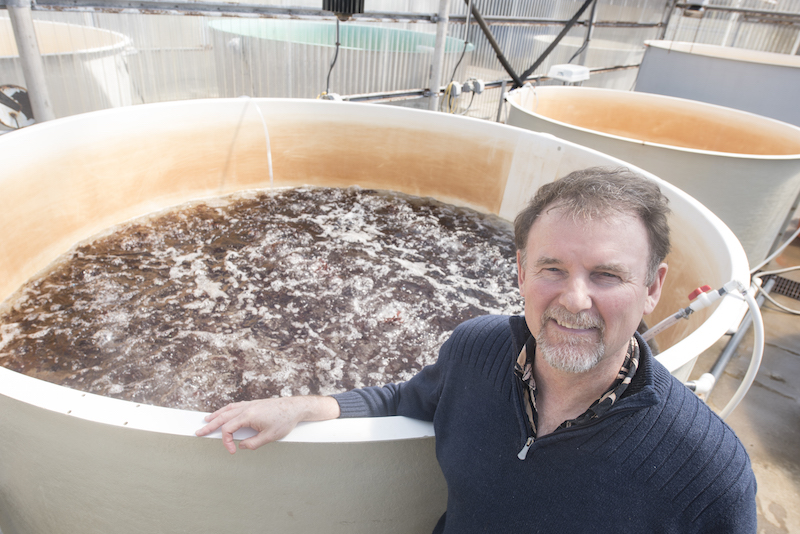 Dulse (Palmaria sp.) grows naturally along the northern Pacific and Atlantic coastlines and is harvested, dried and sold as a cooking ingredient or nutritional supplement.  But researcher Chris Langdon and colleagues at the Hatfield Marine Science Center have created and patented a new strain of dulse that looks like translucent red lettuce, is an excellent source of minerals, vitamins and antioxidants and contains up to 16 percent protein in dry weight.

“The original goal was to create a super-food for abalone,” Langdon stated in a press release. “We were able to grow dulse-fed abalone at rates that exceeded those previously reported in the literature. There always has been an interest in growing dulse for human consumption, but we originally focused on using dulse as a food for abalone.”

When Chuck Toombs, faculty at OSU’s College of Business, was looking for projects for his business students, he saw another opportunity for the tanks of algae Langdon was growing.

“Dulse is a super-food, with twice the nutritional value of kale,” Toombs said. “And OSU had developed this variety that can be farmed with the potential for a new industry for Oregon.”

Jason Ball, a research chef at OSU’s Food Innovation Center, was also interested in the novel crop Langdon was producing – but his focus is researching innovative products and delicacies including crackers, salad dressing, dulse veggie burgers, trail mix, and even dulse beer.

Working directly with Langdon, Ball is also experimenting with different strains of algae that have different flavors and attributes. “Pan-fried,” he says, “dulse can be light and crispy with a savory saltiness, like bacon.” Fourteen prototype dulse products have been created, tested with consumers, and the field has been narrowed to the top five for further testing—trail mix, rice crackers, salad dressing, sesame seed chips, and smoked dulse popcorn peanut brittle. Several Portland-area chefs are now testing dulse as a fresh product and many believe it has significant potential in both its raw form and as a food ingredient.

“When you fry it, which I have done, says Langdon,”it tastes like bacon, not seaweed. And it’s a pretty strong bacon flavor.”

There are no commercial operations that grow dulse for human consumption in the US, according to Langdon, but it has been used as a food in northern Europe for centuries. “In Europe, they add the powder to smoothies, or add flakes onto food,” Langdon said.

Toombs’ MBA students are preparing marketing plans for the new line of specialty foods and exploring the potential for a new aquaculture industry which includes how to expand production from the current two tanks in Langdon’s lab to commercial scale with additional facilities – all feeding into the markets developed by Ball and his team.

“There are few places in the world with this much collaborative talent from start to finish,” Toombs said.