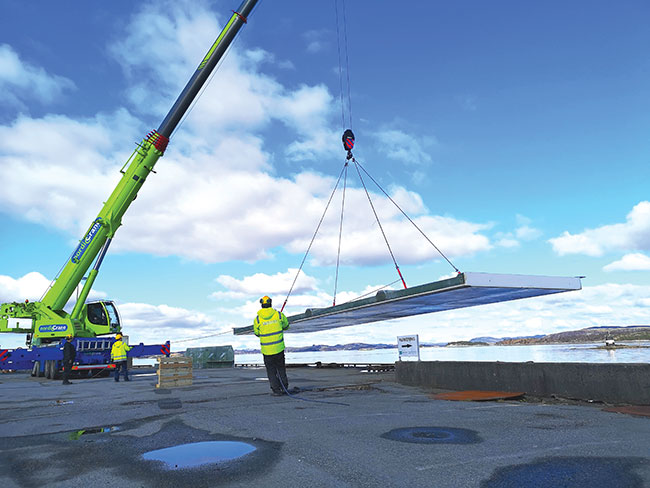 Andfjord Salmon of Norway is investing in a new concept: a closed shore-based system of flow-through pools made of glass fiber reinforced polyester composite from HighComp AS. Shown here is one of the 17.5-by-5-meter panels that will form the pool Photo: HighComp AS

Like deep-water waves, news reports about offshore aquaculture around the world have been breaking hard and fast in recent months, including both technology and personnel announcements. But perhaps the greatest momentum to move farming offshore has surfaced in Washington, DC.

It’s been a long time coming, especially when viewed from what’s happening in Europe.

In May, the Trump Administration issued an Executive Order designed to develop more effective permitting related to offshore aquaculture. Among its edicts are to limit to two years any environmental decisions and for the National Oceanic and Atmospheric Administration (NOAA) to take the lead when two or more agencies are involved.

“This is a big moment for aquaculture in this country,” said Jeanne McKnight, Executive Director, Northwest Aquaculture Alliance. “The United States currently ranks 17th in global production of aquaculture yet imports 85 percent of the seafood we consume — largely from aquaculture. We are glad our government recognizes that the time has come to produce this high-quality protein right here at home.”

Neil Sims, the chief executive of Ocean Era, formerly Kampachi Farms, is a passionate proponent of ocean farming. “When I talk to my colleagues in the Gulf of Mexico region, they’d just throw their hands up in the air and say, ‘The process is open-ended.’ But now, this EO removes a lot of the risks for a permit applicant.” His company’s permit for Velella Epsilon, a small-scale yet innovative submersible net-pen trial planned for offshore of Florida, is now in its third year of regulatory review.

The Executive Order has also introduced “aquaculture opportunity areas,” directing the Secretary of Commerce to identify locations suitable for commercial aquaculture for which the federal government will complete a programmatic environmental impact statement (EIS). The EIS may also identify suitable species and gear, as well as reporting requirements for owners and operators.

“That is going to be phenomenal in terms of allowing both commercial development, but also innovation,” Sims said. “If Congress also supports it with the legislation that had been proposed by Senator Wicker, together they will herald a new day for offshore aquaculture in the US.”

Wicker’s proposed legislation in 2018, known as the AQUAA Act (Advancing the Quality and Understanding of American Aquaculture Act) died in 2019, but it was re-introduced early this year in the US House of Representatives as HR 6191. It aims to establish a regulatory system for sustainable offshore aquaculture in exclusive economic zones.

News on regulatory progress in the US comes at a time when the world is increasingly aware of the ocean’s vast potential to help feed the planet.

Food security has also come into sharper focus during the COVID-19 crisis as both Canadians and Americans have seen what happens when one country is dependent on another for manufacturing and supply chains. Remember Trump’s directive for American firm 3M to stop exporting N95 masks to Canada? It’s not a big leap to imagine how export freezes could create food shortages.

So, the time is now to address seafood trade deficits.

Gustav Witzoe, chief executive of SalMar, recognized that SalMar’s “huge” investments in offshore aquaculture technologies “would not have been possible if the government and a united Norwegian parliament had not introduced the development license scheme.”

In May, the company announced that good results from Ocean Farm 1 – SalMar’s and the world’s first offshore salmon farm – have prompted it to apply to convert those development licenses into permanent permits. SalMar will pay much less than buying licenses during commercial auctions.
And the industry as a whole advances in its sophistication, thanks to this Norwegian Directorate of Fisheries program. It’s a win-win.

SalMar is also building on the success of Ocean Farm 1 trial with Smart Fish Farm, a more technologically advanced system that can withstand exposure better and provide twice the capacity. The system, now in its final stages of design, will be located in open water 20 to 30 nautical miles off the coast.

Certitude about the governmental framework also inspired Andfjord Salmon to invest in a newly announced patented concept: a closed shore-based system of flow-through pools made of glass fiber reinforced polyester composite materials, instead of the traditional steel, aluminum and concrete.

The tank contractor, HighComp AS of Norway, is tapping into its offshore experience in the oil and gas industry and constructed the large pool panels off-site. This plan yielded shorter installation time, plus high-quality finish and durability, the company said.

Similar to land-based RAS farms, the design limits escapes, sea lice, and poisonous algae and isolates waste. And like the open net pens of neighboring farms in northern Norway, it utilizes fresh Arctic seawater and promises none of the off-flavors associated with RAS.

On 1 April, Martin Rasmussen stepped into the CEO spot at Andfjord, which has a government concession to farm 10,000 metric tons of Atlantic salmon. He anticipates the site will be ready this year in late summer and says his focus is on proof of concept. 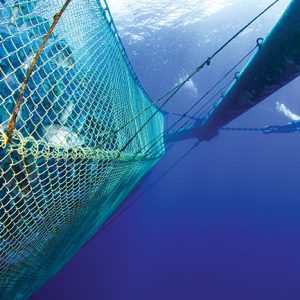 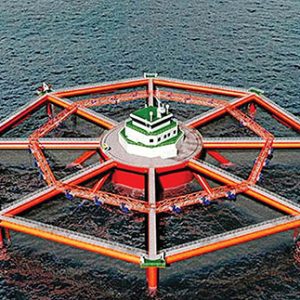 That has become an increasing challenge, as competition from local fisheries and tourism mounts.

“For this ambition to be realized, however, we need an engaged, robust, and forward-thinking regulatory framework that enables Scotland’s salmon farms to continue growing in a responsible manner,” said managing director Jim Gallagher. “With this is mind, we’re eager to take the next step by opening the dialogue with Marine Scotland, SEPA (Scottish Environmental Protection Agency), and local authorities.”

Norwegian leaders SalMar and Leroy own Scottish Sea Farms in a 50/50 joint venture. The newly proposed open ocean farm would be Scotland’s first.

Besides, the cost of new technologies for offshore aquaculture remains prohibitive, although this is true not just in Canada but the rest of the world.

“Investment cost is still very high for offshore cages and there is so far no evidence that going offshore will resolve the lice problem, something that could have balanced the high investments,” acknowledged Alf Reidar Sandstad, CEO of Seafarming Systems of Norway.

Sandstad invented the Aquatraz, a semi-closed salmon “prison” for sheltered areas with a maximum wave height of c. 2.4 meters. The cage, he said, is far cheaper than those designed for offshore environments because designs for sheltered areas can be far lighter that those meant for exposed ones. This cost savings is crucial in strengthening fish farmers’ competitiveness compared to using conventional cages and will open up a large market, he added.

Canada’s salmon farmers remain committed to innovating coastal net pens to get a grip on rising costs related to animal health and ensuring sustainability. They are keen to deploy innovations originating from Norway. For instance, Cermaq Canada is intently watching the company’s pilot of a closed containment system called Certus in northern Norway.

From deep below, at temperatures too cold for lice, this system draws water into a cage with a tarp wall made of strong and flexible composite. In the Norway trial, smolts were grown to two kilograms, then transferred to open cages. Trials have so far shown that the fish are “growing better” than those fish in the company’s traditional net pen structures in the same location, said the company.

David Kiemele, managing director of Cermaq Canada, told this publication in an earlier interview that he sees farming salmon all the way to harvest size in such a system in Canada. He recently repeated his plan, saying to ANA: “I have a desire and focus to trial Certus in Canada. I think there are multiple benefits.” 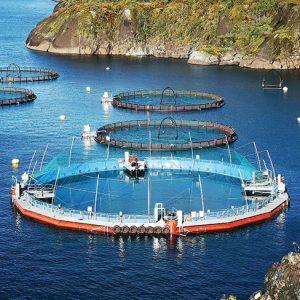 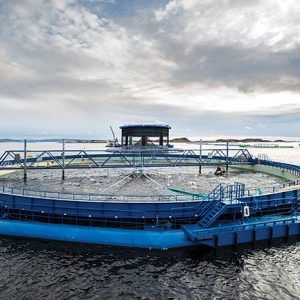 Offshore aquaculture lures talent to Panama
The large, multinational players based in Norway have taken a leadership role in offshore aquaculture, but smaller entrepreneurs have also emerged, producing niche species in warmer waters.

Open Blue, founded in 2007 by Brian O’Hanlon, farms cobia in 22 prism-shaped, deep-water cages in the Caribbean 13 kilometers (about eight miles) off the coast of Panama. This venture reportedly produces over 1,400 metric tons of fish per year.

The prospects for offshore aquaculture recently lured Andrew Young to Open Blue as chief commercial officer. For more than four years, Young had served as vice president of global sales and marketing at Cooke Seafood and is now based in Panama.

Such confidence in offshore has been fortified by environmental impact studies like the one published last July by University of Miami scientists, who worked with Open Blue. Over five years, researchers collected water and sediment samples in several locations upstream and downstream from submerged fish cages.

The data “demonstrated that when appropriately sited, commercially scaled offshore aquaculture installations have the potential to operate in a way that produces a relatively small pollution footprint,” the university said.

Aaron Welch, Ph.D., who was lead author of the study as a graduate student, today owns a shellfish company in Florida and provides environmental and third-party certification consulting services for finfish farms and hatcheries. “There is a lot of energy and foment in the industry right now,” he agreed. “The economic logic is overpowering.”

But, during the last 15 years, he has observed legislature bubbling up but not necessarily moving forward. Personally, he is in a “wait-and-see mode.”

Similarly optimistic yet pragmatic, Cermaq Canada’s Kiemele scans the horizon with an advisory, “We believe it’s going to take all different kinds of technology. The message is: if there is a shift, it should not be expected to occur quickly. It will take a measured approach and time.”

After all, although big waves signify a lot of energy, only a small amount of water moves forward.

– With additional reporting by Liza Mayer