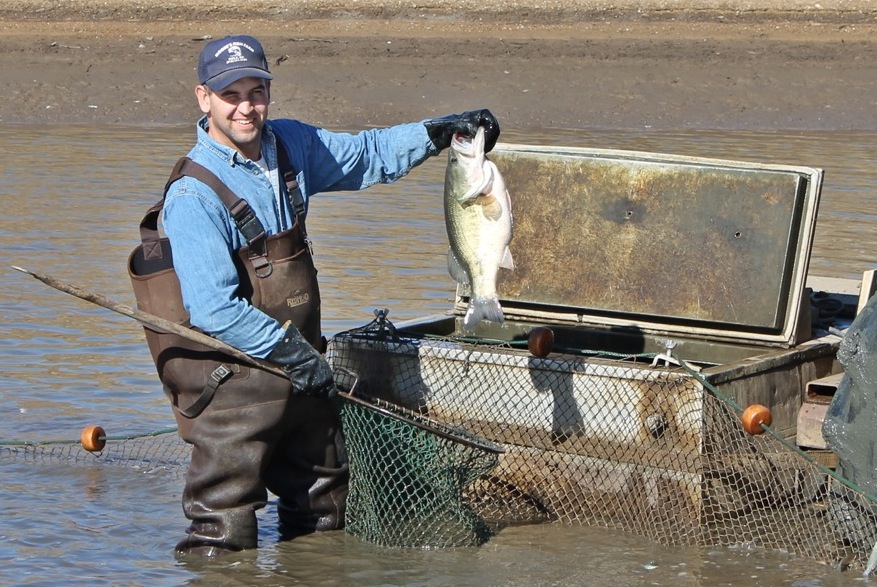 At the Oklahoma-based Moore’s Fish Farm the work of growing channel catfish, Nile tilapia, and northern largemouth bass is a family affair.

Located just outside of Inola, the farmland has been in the Moore/Mote family since the earliest years of the last century. By the 1950s, brothers Bob and George Moore began fish farming, starting with catfish, and building several ponds and channels on the property.

In time, the two brothers branched out and ran their own farms. George maintained the original fish farm along with cattle which is still raised there today. The success of the traditional farm allowed George to expand the fish farm and start raising different species of fish including bluegill, bass, minnow, and crappie.

George and his wife, JoAnne, had four children. His daughter Dianna and her husband, Dewayne, took over the fish farm in 1997 after George died. Dianna and her husband Dewayne Mote ran the farm, continuing to raise fish for wholesale and pond stocking as well as building a fee-fishing pond on the property.

Dianna started a Fish Fry Restaurant which quickly became a success, selling both farmed fish and meats. Dewayne and Dianna had two children, Melissa and Brandon, and now Brandon and his wife Casey run the show.

“We raise some of our fingerlings and fry and we also buy some from another fish farm,” Casey Mote told Aquaculture North America. “We have hybrid bluegill, straight bluegill, largemouth bass, channel catfish, and tilapia that we are raising here.”

After the unexpected death of Dianna in 2007, the family reassessed the fish farm operations. They decided to do away with the fee fishing pond and return it to commercial catfish production. They continue to raise cattle and sell their fish for pond stocking and now the farm has contracts with the state and the city of Sapulpa.

The business plan continues to include the fish farm, cattle, and restaurant.

“We use all three enterprises under one plan,” Mote said. “We like the diversity in case something doesn’t do well for the year. We will always have something to fall back on.”

The tilapia were initially used primarily as a forage fish to put into ponds with catfish and bass. They were good at vegetation control, most notably through their appetite for algae.

For a while vegetation control was the primary use for tilapia as the fish didn’t overwinter in waters at or below 50°F. After learning how to overwinter the fish indoors on a small scale, the family decided to build their own recirculating system in a fully enclosed building 25ft x 80ft building. They added a propane wall furnace to keep the room temperature around 80°F and swimming pool heater to warm the water. They also included a bio filter, screen filter, and drum filter to help with solids and ammonia control for the 8600 gallons of water used in the facility.

“Our recirculating system is homemade and developed by trial and error,” explained Casey Mote. “We are constantly figuring out new and better ways to improve it. Definitely a work in progress.”