On the half shell: ‘Captain Clam’ puts a face to Greenwich, Connecticut’s booming shellfish industry

If you’ve been to Eastern seaboard, you may have heard of Captain Clam. His name is Edward Stilwagen and hard clams have been part of his life since he was very young, in the 1940s, when they were worth only 2 cents apiece. 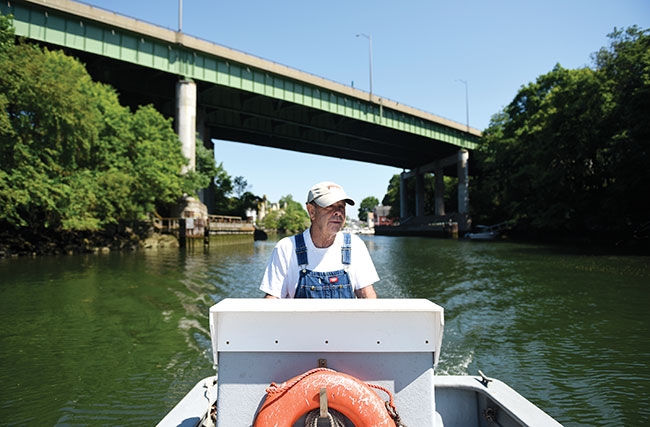 Stilwagen is now 80 and has been the proud owner of Atlantic Clam Farms since 2000, when he started the business. “I was an engineer in the 60s in New York City, but I wanted to be out in the sea,” he shares. “I quit and started selling seafood to restaurants, then one thing led to another and I got more involved in the industry.”

In the 80s he invented a clam sorting and counting machine and sold a lot of them. “They’re used all over the world. I got to know everyone in the industry that way. I sold that business in the 90s and then got into boat and general marine manufacturing,” he says.

Clam harvesting usually involves vessels trawling the ocean floor, but this dredging is in some ways destructive. Stilwagen invented a system wherein a minimal jet of water first loosens the clams and a vacuum system sucks them up onto a conveyor into the boat. The clams are then cleaned of various small sea bottom tag-alongs, baby clams and extraneous shell material, which are all returned to the ocean. The clams are then sorted and counted into bags on the boat and come to shore ready for market. Stilwagen says his system is very gentle on the ocean floor and works very well.

It was perfected just in time. In 1999, Stilwagen heard about some clam farm lots available for lease off the coast of Greenwich Connecticut in Long Island Sound and purchased them. “The leases are in perpetuity as long as you pay,” he says. “You pay every year what you paid the first year.”

He runs his two boats over 4,000 acres in total – 3,000 leased from the state and another 1,000 from Greenwich – harvesting about 15 million clams on average annually with the help of 10 employees. The boundaries of lease lots were marked with buoys and flags years ago, but the industry has now turned mainly to using GPS since Stilwagen started.

Atlantic Clam Farms sells a small amount of its in-shell live hard clams to three area restaurants, but most of them go to a large wholesale distributor that sells them in Connecticut and adjoining states. Stilwagen says the smaller ones are eaten mainly raw on the half shell, and larger ones are usually cooked in various sauces.

Challenges over time
In 1960, Stilwagen explains that the great south bay in Long Island was largely devoid of clams. Then an enormous “set” took place and by 1964, the harvest was really high. In fact, at that time, the area accounted for 50 percent of US production. Two clams can produce five million offspring and clams need three to five years to grow. Stilwagen notes that the harvest goes up and down every year, depending on natural conditions mostly related to food. He says hard clam harvest is sustainable as long the clams are reproducing as they should.

Fuel prices have increased over the years, but Stilwagen says it’s not a very large operating cost, and that clam prices have also gone up. “In the 1940s, they were two cents a piece and now I get 30 to 35 cents for the small ones and 12 to 15 cents for the big ones,” he reports. “The smaller ones are in greater demand. There really isn’t much competition. There are not enough clams for demand. Everything always sells.”

One challenge is land-based pollution found in rain runoff (which negatively affects clam quality), but it’s a situation that Stilwagen says is handled very effectively in a team fashion. “It depends on the year and there really hasn’t been a big increase in rain over the years, but if there’s a lot of rain, the Connecticut Aquaculture Department will shut down the beds for a while,” he explains. “Three inches closes everything for about two weeks, for example. After some time, they do a water test and then test some clams and oysters and lift the ban when all is okay. But I’ll tell you, the water is much cleaner now than it was in the 80s and 90s. We have a Harbor Watch and if there is polluting going on, they will find the source and shut it down. They have been very beneficial for the whole industry and we support them financially to do this work, and other groups do as well.” Stilwagen says the state government is quite supportive of the industry, and that Connecticut is one of the few states that allows machine-powered clam harvesting. He never has a problem finding employees.

However, respect for Mother Nature is needed. “The saltwater environment is rough on machinery, and you can run into a rock, storms, ice in the winter,” he says. “We harvest every day and you have to criss-cross and never wipe out a whole area. There are hot spots with a lot of clams growing faster and other spots that need more time. It’s a wonderful resource, and you just have to protect it and respect it. You can’t physically see what’s down there, being in a diving suit is no use as there is no visibility, so harvesting properly is a matter of experience.”

Besides his experience, Stilwagen attributes his success to being friends with everyone in the industry and also to his engineering background. “We all get along and we help each other,” he says. “It’s a good place to be. I’ll never starve. I’ll always have clams to eat. My favourite is eating them in the half-shell with a little horseradish. They’re really good.