Once upon a Hawaiian fish pond

According to Hawaiian tradition, fishermen in Hawaii built the first fish pond on the island of Maui. 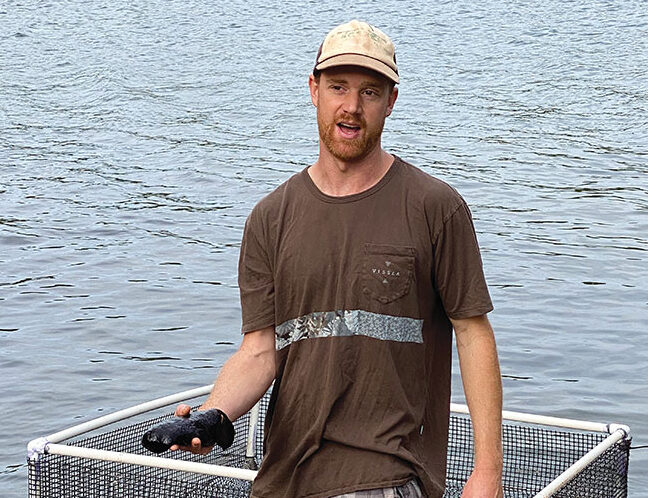 Dave Anderson, production manager at Kauai Sea Farms, with a sea cucumber—they are beginning to farm this delicacy in an effort to build a sustainable market for a regenerative aquaculture system. Photo: Jennifer Bushman

K’ula was a fisherman of skill who is described as having powers for directing fish. Legend said that he was able to summon fish and ultimately was named the Hawaiian god of fishing.

Ancient Hawaiians were the first islanders in the Pacific to make use of ponds and fish farming. For thousands of years, Hawaiians developed aquaculture to supplement their other fishing activities. Fish ponds guaranteed food for the tribes and increased the wealth of the managing chief. Fish ponds provided fish without requiring fishing expertise and harvesting the pond, unlike fishing at sea, was not season nor weather-dependent.

Changing their main food source
Hawaiians built fish ponds were built on O’ahu, Lana’i, Maui and Kauai, with the highest concentration of ponds on Moloka`i. The rock-walled fish ponds took advantage of tidal flows on shallow reefs to capture fish. Subsequent loko kuap’ were also constructed on the shallow, nearshore reefs, but are much larger and innovative structures, ranging in size from an acre to more than 100 acres. Freshwater run-off from the irrigated agricultural terraces as well as natural streams and springs brought nutrients to the pond, which stimulated the growth of plankton and algae, creating a productive nursery for many species of fish.

A dying practice
It is estimated that there were 488 fishponds across the Hawaiian islands prior to contact with westerners. In 1901 out of 360 fish ponds that remained only 99 of which were active.  They produced nearly 750,000 pounds of fish.  Fish ponds have dramatically disappeared due to development, changes in land use, especially the spread of invasive mangrove and sediment accumulation from lack of management. Luckily, over the course of the last decade, fish pond practitioners have been restoring this important part of Hawaiian culture. One such project, is the Nomilo fish pond on Kauai.

Located on the southwest shore of the Garden Island- the Nomilo fish pond is an extinct volcanic crater that filled with water.  It is an 18 acre brackish water pond, fed by two auwai – channels that connect the pond to the ocean. Nomilo is one of the oldest and one of the most fertile fish ponds in the State of Hawaii.  It has pristine water and a rich supply of algae to provide perfect growing habitat for fish, limu (sea vegetables) and shellfish. 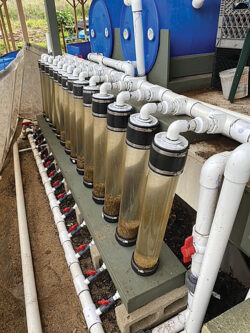 Kauai Sea Farms’ clam broodstock, which they sell on the island to Roy Yamaguchi for his restaurant Eating House 1849.
Photo: Jennifer Bushman

The Nomilo fish pond has been in the same Hawaiian family for over 100 years. According to the Kauai Sea Farm website, Hawaiian legend states that the Nomilo fish pond was created when Pele, the Hawaiian Goddess of fire and creation first arrived on Kaua’i. Unable to find a suitable home on the island, she caused a small hill along the southern shore of the island to erupt. The eruption covered near-by Kalaheo with small black rocks and created a crater in the earth. The crater filled with sea water and became the Nomilo Fish pond. Before leaving Kaua’i, Pele left two supernatural eels named Puhi-‘ula and Puhi’pakapaka, to guard the fish pond. The farm honors this myth by representing the eels in their logo.

Kauai Seafarm is a farm that pairs modern technology with traditional Hawaiian fishing methods. The team’s mission is to preserve this incredible sight while providing sustainable sea vegetables, shellfish and fin fish. They have one goal in mind; that the fish pond be a part of the contributive food system for the community and the surrounding islands.

Where preservation meets production
This is accomplished through the efforts of the Taylor family. Their continued investment in the preservation of the site and the employment of the team has been nothing short of remarkable. Lynn’s grandfather, Philip K. Palama Sr., acquired Nomilo over 100 years ago. She, along with her husband Thayne have been able to intersect preservation and production on this historical site.

Their mission is to preserve the integrity, health and well-being of Nomilo fish pond and surrounding coastline while developing sustainable production of shellfish and seafood products is nothing short of miraculous. The hiring of Dave Anderson as their production manager brought to the farm a sense of process and experimentation. Dave came with the expertise from having worked in sustainable aquaculture on the island. He understands the unique aspects of rearing blue foods from the egg all the way to harvest.

At present, there are numerous species in the fish pond. One of the most exciting prospects on the farm is the sea cucumber. Sea cucumbers are in high demand in Asian markets where they are considered a delicacy, health food and aphrodisiac, and this has led to wild sea cucumber stocks being overexploited. Dave decided after some initial research that this could be the crop that they have been waiting for. While in the early stage, the sea cucumber is thriving and will likely make a decent income for the farm.

In the U.S., Hawaii is leading the way with its views on sustainable aquaculture and the role it will play as we set the table of the future of food. Hawaiians understand the need to adapt in order to fight the serious issues that face our ocean today. This new generation understands the enormous opportunity of linking the present and the future together.  They are helping to reignite the innovative spirit that was embodied in K’ula’s first fishpond. It is the inspiration needed to plot a path to modern aquaculture in the state. A role that the rest of the U.S. can benefit from.