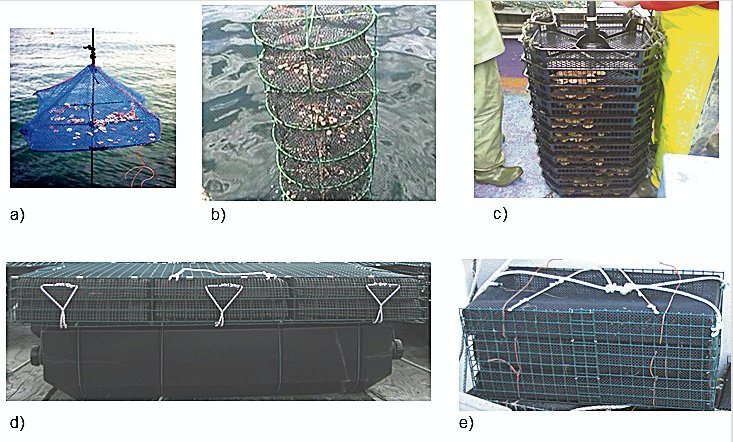 An open ocean mussel farmer in Chaleur Bay, New Brunswick, Canada was looking to expand production to include sea scallops.  Open ocean sites are not protected from wave action which can reduce both growth and survival of cultured species.  But research has shown there is a potential for scallop culture and spat collection in exposed areas with success dependent on gear type and culture method.

The multi-year project was designed to compare growth and survival of sea scallops (Placopectin magellanicus)  grown in suspension for two years, grown on the bottom for two years and grown in suspension the first year and transferred to the bottom for the second year using several available culture gear types. The exposed site used has an average depth of 23m (75ft) and is the only open ocean mussel farm in the region.

Winter ice cover is common in Chaleur Bay, so to avoid the winter ice and also to minimize wave action; the suspended culture gear were placed at a depth of at least 6 m or 20 ft below the surface.  The initial stocking density for each gear was calculated so the scallops would not cover more than 30% of the floor area of the gear at the end of the grow-out cycle.

After the first year, survival and growth was evaluated and photographs of the fouling were taken.  The scallops were then placed in clean culture gear at the appropriate densities for each gear type.

Acute temperature changes were observed with the highest recorded temperature of about 16oC and the lowest -2oC.  Overall the water temperature in suspension was warmer for a longer period and was slightly warmer than the bottom.

All the handling of the scallops was done in late autumn.  In previous studies, it has been observed that scallops have a higher survival rate when handled when water and air temperatures are below 10oC but above freezing.

Growing scallops the first year in suspension in traditional Lantern nets and the second yearon the bottom in OysterGro, did significantly improve the survival rate (95.2% ±8.3 vs 77.2 % ± 17.6%).  Scallops in the bottom gear may not have avoided the stress from the temperature changes but they did avoid the stress caused by the wave action.

An open ocean culture site is exposed to wave action that can have an effect on the growth and survival of the cultured species.  Still, the growth rate of suspended scallops was faster than those grown on the bottom unless the suspended culture gear was heavily fouled.

Most commercial scallop growers who want to conduct a large scale operation will aim to suspend their culture gear.  The Kenny cabin and OysterGro are not as easy to handle or to stack as Lantern nets. Therefore, in choosing gear other than the traditional Lantern net, a cost-effectiveness analysis should be done to determine if the benefits of the higher survival rates are offset by higher labour costs.  However, bottom culture gear (rigid cages) may be an appropriate choice for open ocean mussel growers with sites of appropriate depth (at least 21 m or 69 ft) that may wish to also grow a small amount of sea scallops to diversify their operations.

Leslie-Anne Davidson is a science alumni at Fisheries and Oceans Canada, Gulf Region, based in the Province of New Brunswick.  She works primarily on scallop culture research and for more information on the project contact her at Leslie-Anne.Davidson@dfo-mpo.gc.ca.