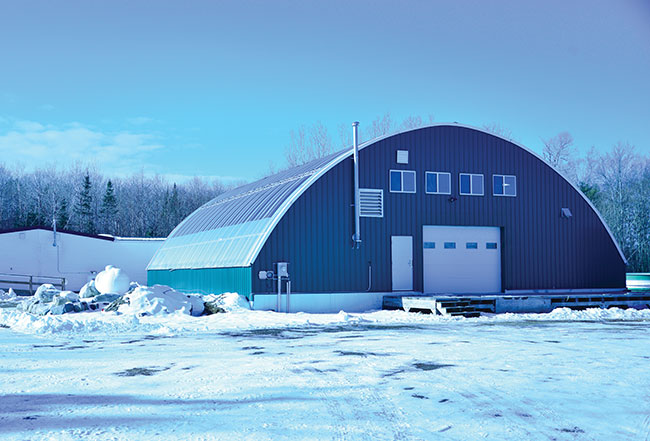 In a building that looks like a solar-powered Quonset hut, the award-winning marine biologist Tap Pryor, one of the commissioners who founded NOAA, is pioneering a non-coastal system to grow Eastern oysters year-round using recirculating aquaculture systems technology.

Maine Shellfish Developers (MSD), founded in 2016 by Pryor and his son, expects production on a pilot scale this spring that will propel progress developing “the newest terrestrial crop,” he says.

The US Department of Agriculture (USDA) apparently agrees there’s potential in those tanks at Waldoboro Business Park in Maine.  The agency has supported exploration of this new frontier in agribusiness with two Small Business Innovation Research grants totaling $750,000.  The Maine Technology Institute was also an early backer.

At the beginning of 2020, MSD moved to the new inland location after a three-year “proof of concept” period at the Darling Marine Center, the University of Maine’s research facility on the Damariscotta River. “We wanted to break the umbilical cord of pumping in sea water and instead make our own and recycle it. Once you make that break, then you are entirely terrestrial.”

Like many of the world’s best ideas, this initiative sounds straightforward but represents an array of biological, chemical, engineering, and economic challenges. The goal, after all, is to “domesticate a shellfish,” Pryor says.

“We’re not creating a business. We’re creating an industry,” he asserts.  Although Pryor immediately apologizes for sounding “big headed,” he has the bona fides to do so.

The Cornell English major and former Marine captain founded the Oceanic Institute — solely devoted to aquaculture research — while still a graduate student in marine biology at the University of Hawaii. At age 35, he served as a Hawaii State Senator. The oysters he later grew in raceways at his Hawaiian seafood farm won recognition as the “outstanding food product introduced to Europe” at the European Food Fair in 1982.  After holding various university posts, he returned to farming. A land-based microalgae/oyster aquafarm in the Cook Islands earned him a United Nations SEED award for entrepreneurship in sustainable development.

Now in Maine, the foundation of land-based high-density shellfish culture has been built. “It is a major challenge, but we learned from our trials, it is achievable,” Pryor says.

The specs
After shutting down for several months last year because of the pandemic, activities resumed in October. Housed in a 60-by-60-foot space within what Pryor calls the “Solar Arch Complex,” the beta operation will utilize four circular tanks, filled with custom pie-shaped cages to take full advantage of the 3,400-gallon capacity of each.

Pryor chose energy-efficient AST PolyGeyser Bead Filters to be part of each unit, which he calls “SS-RAS.” That nomenclature, referring to shellfish, reflects important enhancements to provide oysters with the minerals they need to grow shells — adding calcium and magnesium while extracting phosphate, nitrate, nitrite, and ammonium.

The tank and filter together comprise “a basic feedlot,” Pryor says. “We call four of these a Low Volume Model or LVM.  Each LVM is rated to harvest about a million oysters annually. Five LVM will comprise one High Volume Model. The difference is that with an HVM, the cost per unit is halved, thanks to economies of scale.”

Another key consideration related to tank design includes advanced hydraulics. The goal is to ensure circulation “to the last oyster in the last corner of the last cage” to deliver feed to it and remove its waste 24/7.”

In addition to water quality, MSD is focusing on automation. About one-third of the room will be devoted to tumbling, washing, weighing, sorting, and packing. Through automation, these operations can occur 24 hours a day. This “high level of automated animal husbandry” will also significantly cut labor costs, a burden for current-day ocean oyster farmers.

Nutrition
Before MSD becomes a going concern, it must master how to produce feed for the oysters that will be economical on an industrial scale.  It is a challenge Pryor approaches with gusto, driven especially by his interest in food waste. He has conducted research using extracts of food waste — from lobster processing, tofu factories, even spent yeast from brewing Allagash beer (of which he is fond) — as the medium to culture microalgae heterotrophically.

But phytoplankton, such as microalgae, is only one course in the smorgasbord MSD is planning for its oysters.  The ultimate menu will “emulate the content of the estuary,” Pryor says. “The only way to develop estuarian flavor is to feed oysters estuarian food.”

In addition to phytoplankton, feed will include zooplankton (such as ciliates, which are “like jellybeans to oysters”) and detritus (such as seaweed waste refined so it becomes “bite-size for oysters”). Ocean Organics, which ferments seaweed to make fertilizer, is MSD’s next-door neighbour in the business park and future supplier of fermented seaweed residuals. Already, the two companies share a laboratory.

Aquaculture expert Dr. Barry Costa-Pierce, a professor of ocean food systems at the University of New England, knew Pryor at the University of Hawaii and is familiar with the new RAS project. He reinforces the point that oysters like more than microalgae. “We’ve learned a lot about what shellfish actually eat, and it’s a mixture of different types of organisms, not just phytoplankton.  That’s good news.”

In fact, it could materially impact MSD’s long-term success. As hatchery operations know, production of microalgae is expensive: it requires human management, costly reactors or cylinders, and a variety of inputs.

That said, MSD has already laid groundwork for bulk algal culture by hiring Chris Maloney as chief operating officer. Maloney’s credentials date back to the high-flying start-up GreenFuel Technologies, the first algae-to-biofuel company in the world. More recently, he served as a consultant and also director of biology at Bioprocess Algae, which designs, builds, and operates commercial-scale bioreactors to produce microbial feedstock.

Stepping back to survey the broader landscape, Costa-Pierce says, “The implications of this project are really tremendous.” High-density, land-based shellfish aquaculture could open up new markets in non-coastal areas, such as ski resorts and tourist destinations.  He points to “phenomenal developments in the Middle East,” where high-end oyster bars are multiplying.

What really gets his attention about MSD’s potential, though, is how it could address social and environmental issues, ranging from NIMBY-ism to permitting complexity to the effects of ocean acidification on shellfish. “It’s a very disruptive technology — if it works,” he says.

In February, the MSD team, including some new members, were ramping up operations in their business park homestead, undaunted by the challenges of the new frontier.

Pryor pauses and adds, “The pens are back in production.”