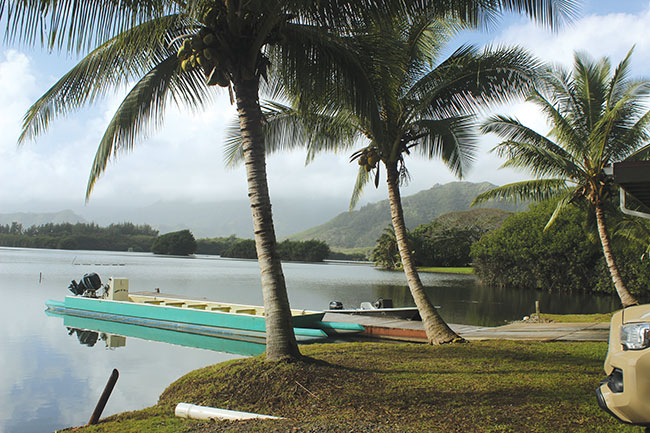 The 800-year-old Moli’i fishpond is one of only a few ancient Hawaiian fishponds in Oahu that's still in use. The water’s high salinity is ideal for growing oysters

When a centuries-old Hawaiian fishpond along the North Shore of Oahu began experiencing excessive algae bloom 10 years ago, oysters became the ideal solution to enhance water quality in the ponds and ensure fish survival.

“That overbloom of algae was making it unhealthy for our fish because algae make oxygen in the water at daytime, but at night time it takes it away. When you have too much algae and you lose that balance, fish will die from low DO (dissolved oxygen) at night because the algae are taking away the oxygen from the water,” explains Ku’uipo McCarty, pond manager at Kualoa Farm where the Moli’i fishpond is located.

The abundance of algae in the pond makes it ideal for growing oysters, which benefit from the pond’s natural phytoplankton production. Kualoa has been farming Hawaiian oysters at the Moli’i fishpond for the last six years since receiving government permits. It is the only certified pond in Oahu to grow oysters.

The 125-acre Moli’i fishpond is 800 years old and is one of the few surviving ancient Hawaiian fishponds today. Although oysters have become the farm’s main produce for commercial aquaculture, fish and other species, such as Samoan crabs, also thrive here and help maintain balance in the pond’s ecosystem.

The farm grows Pacific triploid oyster. The sterile oyster is chosen to prevent the species from spawning and prevent an overgrowth on the enclosed pond. This also ensures a year-round harvest for the farm.

“We are getting a wonderful ecological balancing effect, but we are not overdoing it by having too much natural reproduction of these animals,” explains McCarty, who has worked at Kualoa Ranch for 31 years.

McCarty and two other staff members manage the day-to-day operation of the oyster farm. It’s a lean team for such a labor-intensive undertaking with year-round harvests and a weekly manual treatment regimen to ensure that the oysters are free of barnacles and muddy mudworms (Polydora websteri). The resulting market-ready oysters are clean and great-tasting, which makes it all worth the work, McCarty says.

Unique growing process
The Moli’i pond contains about a quarter million oysters at any given moment. Production is roughly 13,000 pieces of oysters per month, of which around 10,000 are picked up by the farm’s authorized distributor. The rest are sold by the dozen to the local community. The distributor sells the oysters to other islands in Hawaii, specifically to Maui and Kauai. With the COVID-19 pandemic, however, most of the harvest are now sold directly to the community.

Growing oysters in a pond has its unique advantages, says McCarty. The farm uses different-sized floating baskets at various stages of the oysters’ lifecycle.

“Because it’s an enclosed pond, I don’t have to worry about my gear straying anywhere,” she says. “If it gets loose, it’s in our pond and I can get it. This is a privately-owned fishpond, there’s no trespassing, no fishing. It’s different from, say, a lease that someone would have in the ocean. We are contained.”

The pond itself is shallow – only about two to three feet deep – with a very muddy sediment on the bottom. The floating baskets keep the oysters out of the mud and allow the oysters to stay afloat as they feed on the phytoplankton on top of the water.

When new oyster seeds come in, they are placed in baskets with 4-millimeter mesh screens. The so-called “mini mesh” are small enough to keep the seeds from falling out of the baskets. As the oysters grow bigger, they are transferred to baskets with half-inch to one-inch mesh screens until they’re ready for harvest. The whole grow-out cycle takes about nine months.

A big challenge at the Kualoa farm are the mudworms, a common nuisance with oysters grown in mud ponds. Mudworm burrows itself into the oyster shell. It does not actually eat the oyster, but once inside, the oyster covers the worm with nacre. When a shucking knife hits that covering where the worm is, mud would get in the oyster.

McCarty’s team tried desiccation, or the process of drying out the oysters, to eradicate the problem. “We did that for three years but it didn’t work.”

What worked, they found, was soaking the baskets overnight in freshwater, once a week.

“We would bring every basket in, and we’ll wash it on the dock and then we’ll place it into the tubs of freshwater and by the time we get a hundred baskets in, it’s the end of the day,” she explains. “We let it go overnight, and the next morning we take those 100 out and we bring 100 in. That takes care of the worms. We’ve been worm-free, or at least managed, for the past two years since we started doing that.”

Treating the oysters with the freshwater soak is done constantly and consistently, notes Israel Velez, aquaculture lead labor at Kualoa.

“When the worm spawns and the larvae is in the water column, usually during the spring to summer months, that’s when it’s very heavily settling on our baskets. And at that time, it’s very important that we do (freshwater soaking) every week. If we miss, we find that within a week about two percent of the oysters end up with mudworm blisters,” Velez explains. 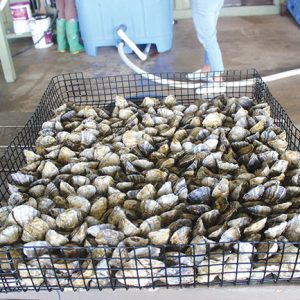 The Kualoa farm harvests up to 13,000 oysters from the Moli’i pond per month 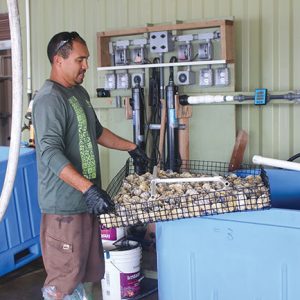 Ku’uipo McCarty, pond manager, gets the oysters ready for packaging 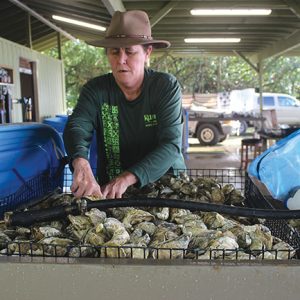 After going through a 48-hour period of purging, aquaculture lead labor Israel Velez gets the oysters ready for packaging

Clean and clear
Barnacles are also an issue the farm has to contend with, McCarty says. “Chefs don’t like barnacle-covered gear.”

When McCarty had a crop of oysters covered in barnacles, they put the oysters in a cement mixer with water to try and break apart the barnacles by having them rub against each other in the cement mixer. Then they place the oysters back in the water for a week to make sure the oysters survived.

But that process was such a hassle so the Kualoa team worked to ensure the barnacles don’t get a chance to settle in the first place, by pressure-washing the baskets at the first sign of small barnacles setting in.

To get the harvest ready for the market, Kualoa oysters go through a period of depuration – a 48-hour purging process where oysters are placed in tanks with artificial seawater to purge the gut so that it goes to market with an empty gut. This results in a clean and sweet tasting product, McCarty explains.

“This is saltwater with a little bit of freshwater,” she says of the Kualoa-owned pond.

“Fortunately, this ranch owns the whole watershed so there’s no urban development. This means you don’t have any cesspool runoff or anything like that,” McCarty says.