The Panacea Oyster Co-op is a collaborative enterprise borne out of a desire to strengthen and revitalize oyster farming in Florida’s Apalachee Bay and other parts of the estuary. By bringing together individual farmers to work towards a common goal, the co-op has brought its members collective benefits. Its efforts are paying off, for the co-op has been championed by US sustainable seafood investment forum, Fish 2.0. 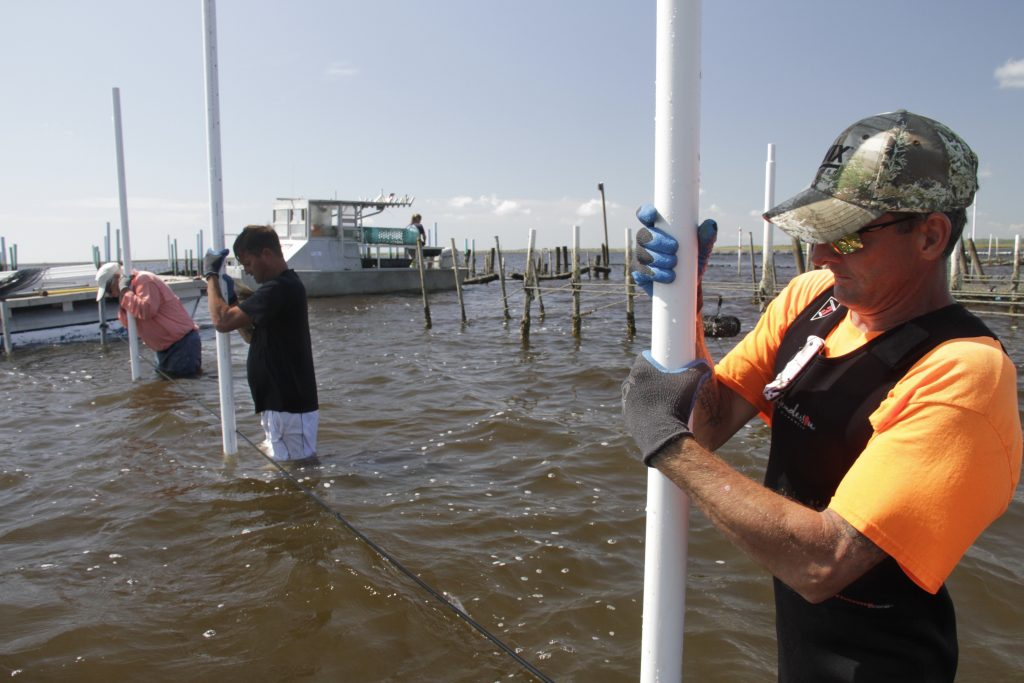 Workers set poles in place for oyster growing operations on a member farm. The Panacea Oyster Co-op provides their members with support to grow robust oysters

The co-op was formed two years ago by a group of classmates at the Wakulla Environmental Institute’s Oyster Aquaculture program. While working on separate aquaculture operations, an Australian equipment supplier suggested that they consider forming a cooperative. It didn’t take much convincing; the group voted Rob Olin as CEO and, later, as chairman of the board.

“We just cobbled a team of very diverse but incredibly talented professionals together for the business side,” says Olin. “I think we’ve attained our goal, which is to provide our members with everything they need — support in terms of accounting, legal, finance, operations, and advertising and marketing. So all they have to worry about is growing the perfect oyster. We now have a pretty substantial juggernaut.”

A for-profit co-op
The co-op provides seed, ongoing training, technology and a guaranteed place to sell their product, at a guaranteed price. They also help them make effective business plans.

A key difference with many co-ops, Olin notes, is Panacea’s for-profit nature. “We have to have investors to build the infrastructure we needed. We have to have enough money to buy the marina to house everything. We had to have an actual structure for a USDA loan, so in that way we’re different.”

As CEO and chairman, Olin is the decision-maker for a lot of day-to-day issues, however, larger questions regarding operations or philosophical changes are made with the 30 members of the co-op. The rancher members and the board of directors both meet once a month, in additional to an annual shareholders’ meeting.

“We’ve been able to enhance the rancher’s performance by way of the financial allowance and economies of scale that we bring to the table,” says Olin. “This is brand new. And like anything you do that’s brand new, it’s like walking into a hotel room when the lights are off. You stumble around and you find your way and you start to get a rhythm, then you start to elevate your performance, and from that elevation you move on to perfect performance. We’ve been able to cover so much ground as a team that we could never have gotten done as any one individual.”

The co-op also benefits from their location, next to Florida’s Spring Creek, the largest freshwater spring in the world. The pure spring water flows through and mixes with the saltwater, making up North America’s most diverse estuary. Olin says this allows for algae to thrive, which feeds the oysters and allows them to grow more quickly. The location also has two tides per day, which keeps nutrients moving in and out.

“When you’ve got oysters that rely on filtering more than 50 gallons of water per day, giving them the mega nutrients that our waters do, that allows them to grow faster than anywhere else on the planet.”

“We’re putting the money, capital and effort back into building the infrastructure into Apalachee Bay,” says Olin. “Hopefully folks in Apalachicola Bay will see the magic that happens from this reintroduction of oysters – a totally different way to harvest and they’ll embrace it and start doing it over in their own bay and bring back that incredible potential that they once had.”

Panacea Oyster Co-op was one of the winners of the recent Fish 2.0 competition. The co-op’s ability to organize people and motivate them to commit to a shared endeavour has been a key factor behind its win, says Olin. Part of the appeal for many in the oyster farming industry is the independence and freedom it allows, but the co-op has convinced its members to give up some of that freedom for the greater good.

“It’s kind of like the old west,” says Olin. “You’ve got a bunch of independent water cowboys and cowgirls. They can make their own agenda for the day because they can adjust to the tide, wind, temperature and current. They don’t especially like to be collaborators or joiners. But here, because the old ways—commercial fishing and commercial oyster harvesting—were gone forever, they saw hope in this new technology, this new way of doing things. And they committed, even though it went totally against their natural instincts and they’re building something much bigger than themselves.”

Vision
The goal of the co-op is to establish their model as a prototype that can be adapted in different areas, either as satellite operations, or the co-op can provide its services as mentors and consultants. The important thing is to help the industry get firmly established.

Oysters are the ideal panacea not only to help supply the world’s growing need for food but also to keep the waters healthy, says Olin. “Oysters are essential for the survival of 3,000 aquatic species. They’re the original filters in the aquarium. Take the filters out, the aquarium dies. Put the filters back, the aquarium comes back to life. The best thing we can do is put filters back in the aquarium. The best way to do that is through aquaculture. The best way to make sure coastal communities see it is through this collective collaboration of a co-op.”