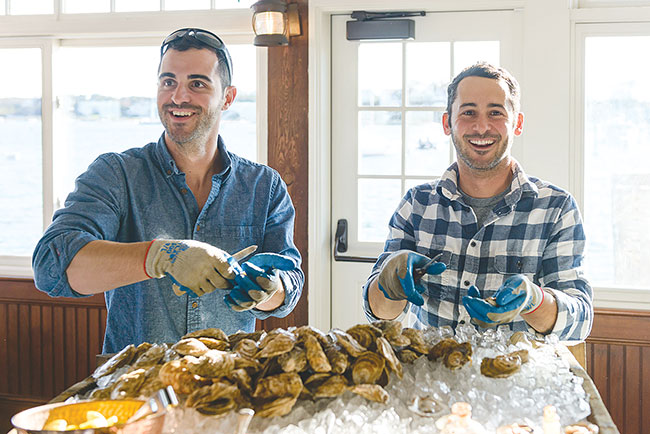 Oyster farmers are taking a leaf out of winemakers’ playbook by offering farm tours to the public, a trend strengthening on the back of consumers’ quest to know the origin of their food.

Data from Sustainable Travel International show there are 105.3 million “eco-tourists” in the United States. These are broadly defined as travelers that take vacations dedicated to giving back to the environment—quality that oysters and other shellfish possess.

“When it comes to thinking about climate change, people hear how good oysters are and they want to go see for themselves,” says Greg Martino of Cottage City Oysters on Martha’s Vineyard.

Oyster farms tours sprung up a few years ago but the numbers of eco-tourists is climbing, anecdotal evidence suggests.

Search “oyster farm tours” on the Internet and one will find a cluster of them in Maine and Massachusetts, and a few others sprinkled in the rest of New England as well as in California. The period May to October is high season for farm tours.

“It’s been bigger than we could have imagined,” says Greg, who co-owns the farm with his brother Dan. They’re going on their fifth year of offering tours. The siblings were inspired to start an oyster farm years ago after they themselves went on a farm tour.

“We’ve learned over the years that people are willing to pay for it. We thought: why don’t we see if we can create a business model behind this,” says Dan.

They offer private tours for small groups of up to six people three times a week during tour season, which always sells out, they said. Each tourist pays $150 for the tour and eat-all-you-can oysters. A “less hands-on” but nonetheless similarly satisfying is one for a bigger group of 25 to 30 people, where each person pays $125. Running the bigger tours two to three times a day during tour season is testament to the robust demand, said Greg.

They believe the tours are an opportunity for consumers “to see for themselves if oysters are really as good as they’re made out to be.” “A lot of the younger people are very food-conscious. They can feel good about eating shellfish or seaweed because they’re actually benefitting the environment instead of harming it,” said Dan.

But while the science and economics behind oyster farming are great talking points during the tour, “what blows them away is the moment when they realize that one can just grow these oysters in the water, with zero input, and now they’re about to have the freshest food they could ever want,” the brothers noted.

“It’s that moment that’s really worth it for them,” said Dan. “That’s what they’re really paying for. We kind of joke that we ruined the oyster experience for people because they’ll never have it that fresh again.”

The only drawback is finding the right balance to host the tours while keeping the farm running. “That’s the hard part. You have to manage the farm and find the labor to get the work done on the farm while the tours are happening,” he said.

Indeed, it is the lack of personnel that prevents Fanny Bay Oysters in British Columbia from offering tours on a regular basis, according to general manager Brian Yip. Fanny Bay offers them only on special occasions, such as those it held for members of the media and chefs during the 2019 BC Seafood Festival.

Taylor Shellfish Farms in Washington State, the largest shellfish farmer in the US and owner of Fanny Bay, has meanwhile put tours “on hold” since April 2017 due to “new food safety and restrictions,” it announced on its website.

“We know that this is a favorite stop for many during spring and summer trips through the area, and we look forward to offering this fun and educational experience again soon,” when expansion of its facility makes it better equipped to receive individuals or groups, it said.