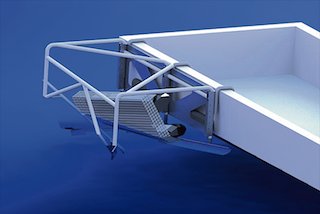 OysterGro cage flipper is being fine-tuned

Engineering firm Maritime Applied Physics Corp (MAPC) believes it could use its expertise in the aquaculture industry.

Military-related projects accounted for roughly 90 percent of the Baltimore-based firm’s work over the past 30 years since its establishment, but it is now turning its attention to aquaculture.

The firm has worked with Acadia Harvest Inc in designing and testing sensors and automated monitoring that would maintain optimum oxygen levels in recirculating land-based fish tanks.  It has also worked with OysterGro of New Brunswick in designing a flipper for the

MAPC is also a participant in  a study funded by the Maine Technologies Institute that aims to explore the feasibility of generating a cluster of industries to deal with green crabs and other invasive species.  John der Kinderen of Waste Not, Want Not, a firm based in Maine has enlisted MAPC to join the study. He asked Frost to design an automated trapping system for green or any other type of crabs.  “We didn’t have the money to build the prototype,” says der Kinderen, “but we validated the concept and are still pursuing funding.  We are also looking at ways to process and market the crabs.”

Frost says MAPC’s expertise could help solve problems in open ocean aquaculture.  “We realize there is great potential for meeting the challenges of going into the open ocean,” he says.

MAPC has developed an unmanned vessel Frost believes could be useful in servicing fish farms in the open ocean or other sites for tasks such as delivering feed to be then dispensed by an automated system.  The vessel could be autonomous or remotely operated. MAPC has also designed a hydrofoil vessel that could transport crew or cargo in choppy seas to and from the site.

Frost is enthusiastic about a hydrothermoelectric generator designed and tested by MAPC with funding from the Office of Naval Research.  The generator harnesses energy from hydrothermal vents.  “The beauty of our generator is that there are no moving parts to seize up or fail when it is placed a mile under water,” he says.  “It could potentially be a power source in remote areas at sea for sensors or scientific research, as opposed to battery banks that have to be constantly recharged.  It could provide powering for any automated system.”