North Carolina grower on a mission to democratize access to oysters 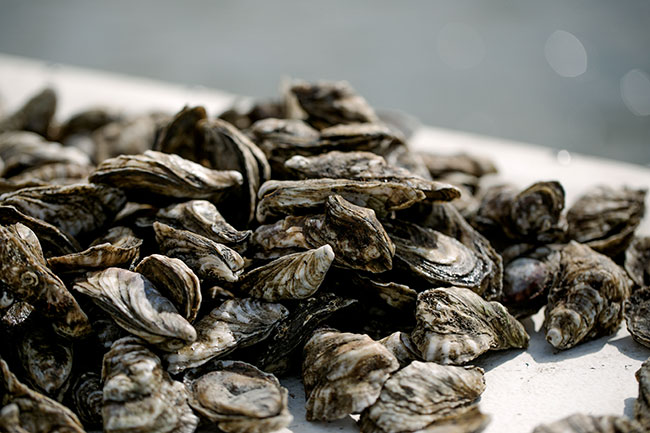 Ryan Bethea is making it easy for people to have access to his harvest. The owner of Oysters Carolina spends a significant time every week driving around North Carolina to bring his product to the people – free delivery with no minimum order. That’s because as much as Oysters Carolina is a business, it’s also designed to benefit the community.

“When we started this, we said we wanted to provide fresh North Carolina seafood for all North Carolinians,” says Bethea. “That’s going to include elderly folks, people with low socio-economic status, folks that live in food deserts, people that don’t have traditional access to seafood. An 80-year-old woman in, let’s say a place like Archdale, North Carolina in the middle western part of the state, might not have transportation or might not necessarily be able to drive anymore, she still deserves the same access to fresh seafood as everybody else, in my opinion.”

Imagining the possibilities
The trajectory of Bethea’s life changed one evening in 2011 when he happened upon a farm bureau magazine that had an article about how North Carolina’s oyster industry had all the elements needed to take off, but no one was really pursuing it. Bethea says he was so excited by the possibilities, he had a hard time sleeping that night.

“We’ve got a very healthy fishery because our waters are so pristine,” says Bethea. “A lot of that is due to the geography of the water. And there’s not a lot of development in the area because it’s so hard to navigate. Most of our seafood either gets shipped up to the northeast or down to the Gulf. But we want our seafood to stay in North Carolina in the hands of North Carolinians.”

Oysters Carolina has now been operating for six years on a lease off Harker’s Island. Bethea uses bottom cages, some with bags, some without. Those without bags are used as holding cages, essentially like trays. Bethea says the 5.25-acre lease he operates on is intertidal, a rarity in North Carolina. It allows him and his lone staff to use bottom cages and still give the oysters some drying time.

“We count oysters all week and get everything ready,” says Bethea. “Then Friday morning we go out and harvest them. I take pictures and videos and text them to our customers and then we deliver them. On average, we drive about 51,000 miles a year. I average about 13 or 14 hours a day on Fridays driving, and about 10 on Saturdays. There’s people that are eight-hours away from the coast.”

The water where the oysters are raised have high salinity – 31-33 ppt, which is conducive to biofouling, says Bethea. Drying is therefore particularly important, and the top and bottom bags are flipped almost every time the oysters are handled to allow for even drying. He is also very diligent about power-washing. 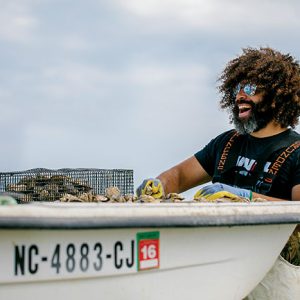 Ryan Bethea, owner of Oysters Carolina, wants every North Carolinian to have the same access to fresh seafood 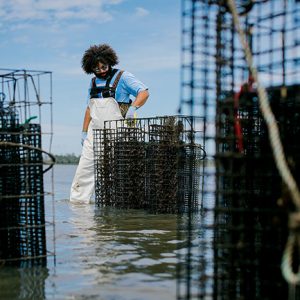 “Ridiculous”
Many people in the area don’t understand Bethea’s community-focused business model because it’s unusual. Bethea says there are those who think what he’s doing is “ridiculous,” some offer unsolicited advice on how to run his business. The bolder ones even ask to see his financial figures.

“People get really brazen about it,” he says. “A lot of people call me just to challenge it. But we do it for the folks that can’t afford it. We could be charging folks a lot more, especially for the service. There’s literally nobody that harvests oysters and then distributes them to people across the entire state for free. To get an oyster eight hours away, that was just in the water eight hours ago, is really remarkable and something we’re really proud of. We only work with one restaurant, everything else goes direct to the people.”

Difficult, but rewarding
Driving long hours around the state to deliver product is challenging, admits Bethea, but it is also rewarding.

“Sometimes, you don’t want to drive another two hours one way and two hours back to break even,” he says. “But when you show up, it makes it all worth it, how happy they are, how grateful they are. They know what we do, that it’s really challenging. And they know that’s their only option and they’re really grateful. ”

He offers farm tours. For $75, visitors can explore the farm and eat all the oysters they want. Later this year, he plans to unveil a land-based operation which he hopes will incorporate educational elements as well. Bethea hopes that he can demonstrate to local students that one have to look far for opportunities. Oyster farming is one of those opportunities where one can contribute economically and socially, Bethea stressed.

“We want to expose people to it,” he says. “We’re bringing them on the water, showing them what we do, giving them food, showing them something that we’ve actually grown with our own hands, that’s also filtering our water and helping our state environmentally. It’s so many things.”