Oysters on the menu for mussel farmers 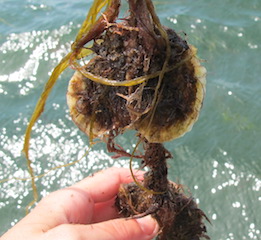 A research effort funded by Economic Development Canada for Quebec Regions and the Innovamer program has assessed the feasibility of oyster aquaculture in the areas of the Gaspé Peninsula and the Ȋles de la Madeleine in the Province of Quebec, Canada.  Based on the results, oyster production has commenced in the area.

“We wanted to compare two kinds of oysters, one from Bouctouche and one from Caraquet in New Brunswick,” says project lead Lisandre Solomon. “We tried two different sizes of oysters, 30-40 mm and 50-60 mm. And we had two different locations – an open water location and also a lagoon.”

Solomon says that the results were much better from the lagoon – primarily because of the amount of food available, but also due to warmer water temperature. She’s quick to add, however, that the open-water results were also good and might be ideal for maturing oysters.

Based on the research, four mussel producers are moving forward with growing oysters in the area.

“They’re interested in diversifying their production,” says Solomon. “For the moment, they all have to get their oysters from New Brunswick. We cannot produce the amount they need in the Madeleine Islands, but that can change. We think oysters can produce spat in the lagoon because the conditions are great for spawning. When we have enough oysters there, maybe we can have people collecting spat. We are really at the beginning of production, though, so we can’t do that at the moment. For now, it’s too small.”

Solomon says that her research efforts continue in this field, now looking at a solution to howmuch dirt sticks to the lantern style nets and to develop a technical resource to help producers with structural problems, cleaning and how to manage the operations during winter months.

The photos at right show oysters grown both by vertical ropes and lantern style nets to provide a variety of data in terms of location, culture techniques

and types of oysters important for growers.