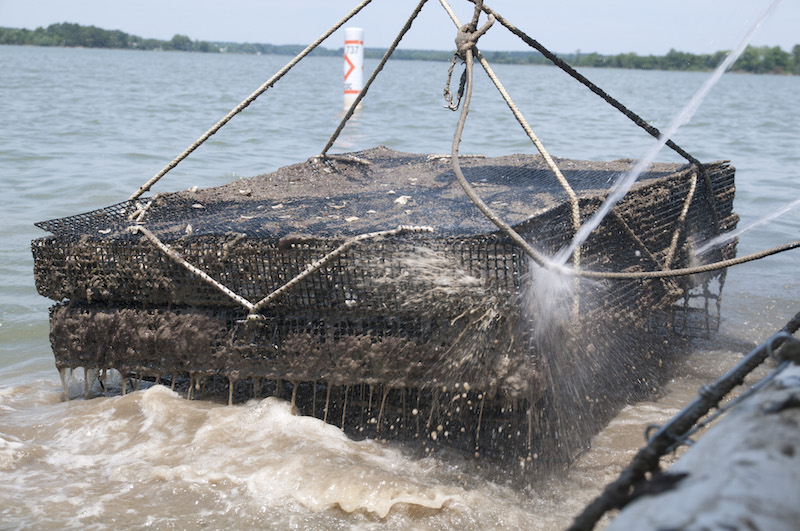 Not only are oysters a tasty treat packed with iron and omega 3, but researchers are hoping this powerful filtering dynamo will also help clean up one of the most important US waterways.

Recent studies are focusing on developing recommendations for addressing some of the problems caused by eutrophication, or nutrient overload, in Chesapeake Bay. The deteriorating water quality levels in and near the bay have long been on the government’s radar and a concern for fishermen and shellfish growers in that area. At the end of 2016, a special panel of aquaculture scientists including NOAA Northeast Fisheries Science Center, the University of Maryland, and coordinated by the Oyster Recovery Partnership came up with  the “Oyster Best Management Practices” (BMPs) to develop ways that oysters may be used to reduce nutrients, in particular nitrogen and phosphorous, in order to meet the EPA’s water quality standards. The Chesapeake Bay Program Partnership has just finished the first stage of approving best management practices  for the uptake of nitrogen and phosphorus into oyster tissue.

Oysters gather food by filtering nutrients out of the water, and when harvested the nutrients absorbed in their tissues — including nitrogen — are removed from the environment. How effective they are at this process can be measured using different approaches. The panel evaluated observed oyster data from various studies and determined that the amount of nutrients stored in oyster tissue for different sized oysters ranged from 110-1,477 pounds of nitrogen and 22-154 pounds of phosphorus per one million oysters. These estimates were approved and can be counted towards reaching the TMDL requirements for Chesapeake Bay and given as “credits” for counties that agree to use approved BMPs and work with the shellfish industry to help clean up their nearshore environment. “The novel part of this project is engaging with new industry partners and joining with the aquaculture community for help in this large-scale clean-up,” Suzanne Bricker of NOAA told Aquaculture North America (ANA).

In a perfect scenario, the proposed biofiltration project would create its own sustainable loop: Increased aquaculture leads to increased water quality, and vice versa. From this loop could emerge a new sustainable source of seafood, and the results from previous Farm Aquaculture Resource Management (FARM) models used in nine countries and now the new oyster BMP panel have already created a conversation between growers and regulators interested in using shellfish filtration to address eutrophication issues on a worldwide level. With so many positives (good for consumers, good for economy, good for the environment, good for wild oysters) it seems likely the panel recommendations will have far reaching implications. Panel discussions will continue into late 2017, when BMPs addressing the evaluation of oyster shells and burial of their biodeposits into sediments can be given a denitrification value for further credits to oyster growers. Julie Rose, also at NOAA, says, “The approach of biofiltration isn’t new, but the visionary aspect of Chesapeake Bay’s BMPs are addressing nitrogen in waters with a much broader application than ever before and providing a framework of policy that other states can use.”

Excessive nitrogen and phosphorus are making their way into the waterways and have dramatically increased the nutrient load in Chesapeake Bay over the last two centuries due to human habitation and agriculture near the watershed.

In small doses, nitrogen and phosphorus stimulate the growth of algae and aquatic plants that are the basis for a healthy ecosystem. In large amounts, those same nutrients can cause an overstimulation of plant growth, which leads to harmful algal blooms and low oxygen conditions.

The economic loss due to eutrophication, or nutrient overload, doesn’t end with shellfish. Researchers at the Virginia Institute of Marine Science have found concrete evidence that the low oxygen conditions, called “dead zones,” have direct impact on the distribution and abundance of demersal fish like white perch, Atlantic croaker, striped bass and summer flounder living and feeding near the bottom of the Bay. The study was authored by Andre Buchheister, who notes: “This is the first study to document that chronically low levels of dissolved oxygen in Chesapeake Bay can reduce the number and catch rates of fish species on a large scale.”

The water quality degradation has not gone unnoticed. Despite extensive restoration efforts during the prior 25 years, in 2010 the EPA was prompted into action by insufficient progress and established the Chesapeake Bay Total Maximum Daily Load (TMDL), a measure of accountability to ensure major changes are made to educe pollution and restore clean water to the region’s most important watershed.