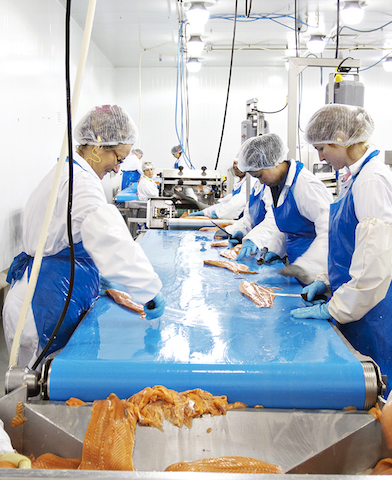 Canada could aim to boost its aquaculture exports to $2.6 billion and its global market share from 0.2 percent to 0.6 percent by 2027 to help it achieve a strong and sustained long-term economic

In 2015, Canada’s volume of exports for all aquaculture products was over 100,000 tonnes, which by volume was just under $770 million, according to the Canadian Aquaculture Industry Alliance (CAIA), citing official trade data.

The Advisory Council on Economic Growth, created by Finance Minister Bill Morneau in March 2016, said the industry could achieve this target “by adopting a new, forward-looking Canadian Aquaculture Act” as well as adopting an economic-development strategy that reforms “ill-adapted traditional fisheries regulations.” Examples of regulations that need streamlining are those that stifle or deter investments in assets such as aquaculture systems, and complex permitting processes, said the council. It added that doing so will create opportunities for provincial, regional, and aboriginal stakeholders.

The recommendations are part of the council’s second wave of proposals that it presented to the Canadian government in February. Aside from recommendations that would galvanize agriculture — under which aquaculture is a sub-category — the council also offered recommendations on other growth sectors, such as manufacturing, energy, and health care and life sciences.

Commenting on the proposals, CAIA Executive Director Ruth Salmon said: “Today the Finance Minister’s Economic Council laid out a responsible and sustainable goal for aquaculture in Canada, and we are committed to working with all stakeholders to seize this unique opportunity. Working together we can continue to produce fresh, healthy, and sustainable farmed seafood, and create new jobs and opportunity across Canada.”