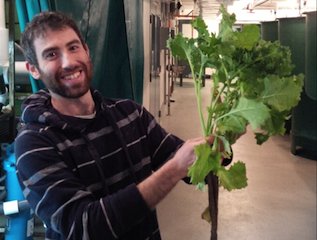 Aquaculture student Max Licker has always had interests in marine life, environmental issues, and food production.  After completing his Bachelors in Marine Science from the University of Miami, Max spent several years traveling and working in restaurants before returning to school to pursue his Masters in Food Systems from New York University.  It was while he was in New York that Max discovered aquaponics, a mostly closed loop system of food production that combines aquaculture and hydroponics to produce fish and vegetables.  He was intrigued by a system that can operate indoors in any environment, including sub-arctic Newfoundland or urban New York City, and produce fresh, local food with minimal environmental stress.

Initially developed to remove waste products from fish culture in a recirculating aquaculture system, aquaponics production has grown exponentially and research is attempting to provide answers to the many questions surrounding this relatively new industry.

Max’s goal is to have his own sustainable aquaponics farm and to further his knowledge he enrolled in the Advanced Diploma in Sustainable Aquaculture program at the Fisheries and Marine Institute of Memorial University in St. John’s, Newfoundland, Canada.  Max chose this program because of the Marine Institute’s dedication to advancing the field of aquaculture and aquaponics.  Cyr Couturier, Chair of Aquaculture Programs at the Marine Institute agrees “Newfoundland is home to one of the largest commercial aquaponics production facilities in Canada and two of our former students are leading this endeavour”.

For his independent research project, Max compared the growth and taste of rainbow trout and green leafy vegetables cultivated in two aquaponics systems each using a different fish feed.  One feed was organically certified and contained high levels of fishmeal while the other contained low amounts of fish and 18% black soldier fly larvae, a sustainable replacement for fishmeal.

Results showed good fish growth with the fish more than doubling their weight and feed conversion ratios (FCR’s) of 0.99 for the fly meal diet and 1.1 for the organic diet.  Sensory evaluation revealed that a four-day purge of fish in both systems improved flavor over non-purged fish with no significant differences in taste between the fish on different diets.

However, the differences in plant production between diets could be due to many factors such as the finer particles in the fly meal diet coating the roots of the vegetables and greater sensitivity of different plant species to water quality, insufficient lighting, and inadequate spacing.

In addition to comparing the growth and taste of fish and vegetables, the project successfully tested a pilot scale version of a commercial system that could be scaled up for use in a dense urban area.

According to Max, “creating a balance between proper experimental procedure

and sound farming practice was one of the biggest challenges with the project.”

Overall he is pleased with the results stating “the project collected useful data that can be applied to future aquaponics development but perhaps the most important result was being able to expose people to aquaponics and spread awareness about sustainable food production.”

This research project was the first system Max constructed and the lessons learned will be used to build his own aquaponics farm in the future.

For more information on the aquaponics project contact Max Licker at msl213@mun.ca.