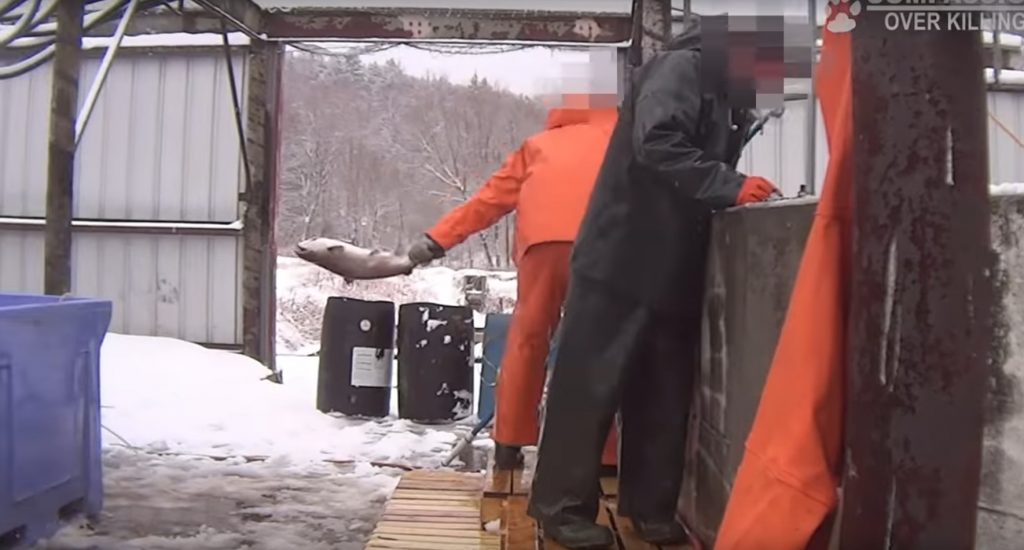 A screen grab from the undercover video shows worker smashing fish against a post as a method to kill the fish. All 12 staff at the Cooke facility in Bingham, Maine, have now undergone formal training on proper fish handling techniques. (Credit: Compassion Over Killing/Youtube)

The investigation into animal cruelty allegations against Cooke Aquaculture found that lack of formal training in fish handling procedures among the staff, and not an ill intent to cause suffering to the fish, as the culprit.

Maine authorities investigated Cooke Aquaculture over a four-month period after Compassion Over Killing (COK), a non-profit animal protection organization, filed a complaint of animal cruelty against the company. The complaint was backed by an undercover video taken by a COK activist employed in the Cooke hatchery in Bingham, Maine, which showed at one point a worker smashing fish against a post.

Maine Animal Welfare Program (AWP) director Liam Hughes, who conducted the investigation, said in his just-released report that “all training was done peer to peer” at the hatchery. “During the course of this inquiry I noted a workplace culture where bad techniques for handling and euthanasia were being taught by staff member to another with no formal structure,” he wrote.

Cooke has apologized for the mishandling of the fish. The company has since implemented changes based on the report’s recommendations, including updating protocols in euthanasia, safe handling and disease recognition. All of its 12 staff at the facility have also undergone formal training on proper fish handling techniques, including how to operate a new machine used to kill fish that the company acquired since the exposé. “Several human resources matters” have also been dealt with internally at Cooke, the report added.

The investigation was something of a baptism of fire for the Maine Animal Welfare Program. The agency adopted the Best Aquaculture Practices standards set out by the Global Aquaculture Alliance because the State of Maine doesn’t have Best Management Practices (BMPs) in place for land-based aquaculture. “This type of aquaculture is very different from other types of farming operations that AWP regularly interacts with,” the report said.

The report recommended that a state agency specializing in aquatic animals look into developing oversight in animal care in land-based aquaculture facilities to ensure compliance with BMPs. “Having other agencies such as DMR or IF&W oversee these operations with regular inspections could help prevent these kinds of complaints in the future,” the report said.