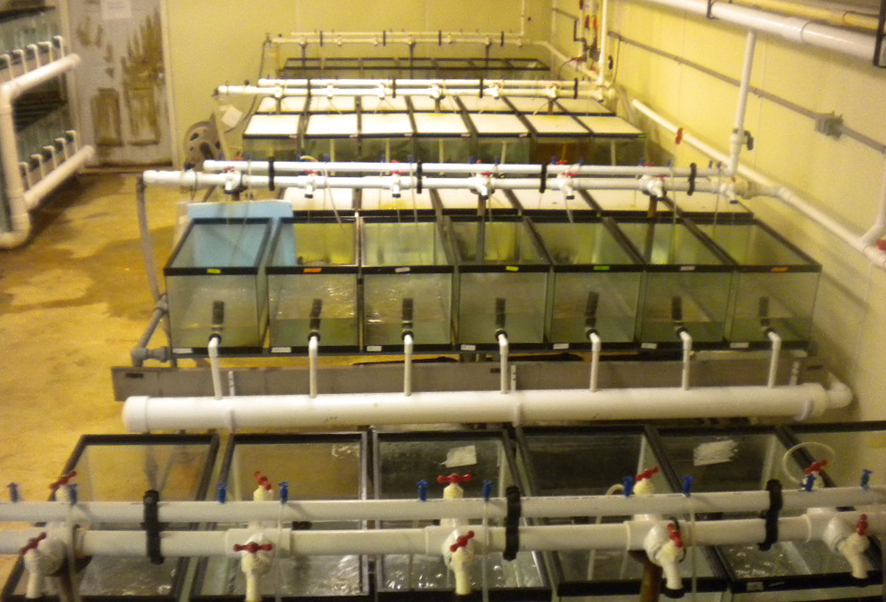 Experimental set-up for examining effects of Lymnozyme on catfish survival. A major constraint to profitability in catfish farming is the incidence of bacterial diseases like columnaris (Flavobacterium columnare) that cause high fish mortalities. This study shows the effects of the priobiotic Lymnozyme.

Catfish farming is important in several of the southern United States; however, a major constraint to profitability is the incidence of bacterial diseases like columnaris (Flavobacterium columnare) that cause high fish mortalities.

The study was conducted in 57-l aquaria filled with 32-L of aerated, flow-through well water maintained at a temperature of 28ºC for 24 days of experimentation.

Juvenile channel catfish, average size 5.9 g, and never previously exposed to F. columnare, were maintained (15 fish/aquarium) for three days during which time they received either 5.0 g of Lymnozyme (2.0 x 109cfu/g) daily (treatments 1-3), or nothing (control). All treatments and the control were replicated five times.

After treatment, all the fish were challenged with 9.0 x 105cells/ml of ALG-00-530 strain of F. columnare by transfer to a bucket containing the bacteria in 2.0-L of aerated water for 30 minutes. Fish and water were returned to the aquaria and held under static water conditions for two hours, after which water flow was resumed. Each day, water was turned off for eight hours during treatment; the water was then turned back on and fish were fed at 3% of their body weight. Post-challenge treatments were: control and treatment 1 received no Lymnozyme; treatments 2 and 3 received Lymnozyme (same dose) daily for 7 and 14 days, respectively.

Control fish (no Lymnozyme) had a mean cumulative mortality after 21 days of 80±12.5%, while treatments 1, 2 and 3 had mean mortalities of 61±14.5%, 50±13.0%, and 44±14.6%, respectively. The differences in mortality between the control and all treatments were significant (p>0.05), but not among treatments. Lymnozyme effectively reduced mortality rates, with longer periods of use yielding more desirable results.