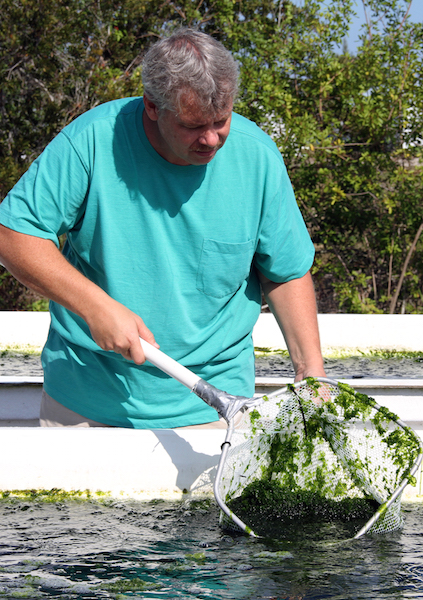 the Harbor Branch of FAU, have been testing the prototype system over the last five years.

Marine-based IMTA systems rely on ocean currents to transport nutrients to complimentary species that are situated adjacent to a traditional fish cage. A standard land-based RAS system relies on recirculation of water through filtration to remove wastes from the installation.

FAU has combined the two concepts into an original land-based design.  It is unique in that it uses a hub-and-spoke concept with a central filtration system focus and a series of culture areas out on the spokes.

“There are land-based IMTA systems that are built in a single loop,” Wills points out. “Each of the components has to be able to handle the water quality issues that came from the prior component.”

“Instead of the traditional linear flow-through system we are modular,” says Wills.  “It allows us to control the environment much better.  We are able to meet the water, feed and chemistry needs of each individual species by engineering the loop that they live in.”

Wills says that with a goal of zero discharge and zero waste, the prototype is looking to bring down costs and improve the sustainability of land-based RAS systems.   A more efficient use of feed and water and the ability to raise multiple species should improve cash flow.  “Land-based systems need to be sustainable in comparison to open-ocean systems,” Wills says.

The team is working with Pompano (Trachinotus carolinus) and Pacific White Leg Shrimp (Litopenaeus vannamei) as the fed species. Sea cucumbers (Holothuria grisea) or sea urchins (Lytechinus variegatus and Tripneustes sp.) do the extracting, while oysters (Crassostrea virginica) or hard clams (Mercenaria sp.) are the filter feeders.  Sea weeds (Ulva sp. and Gracillaria sp.) and Sea asparagus (Salicornia bigelovii) have been added as a plant base to round out the system.

“The key is how to integrate the different species to live together well,” says Wills.  “Because with a land-based system we are building an ecosystem that has to function.”

“When you are trying to capture as much of the nutrient and energy flow as possible, the questions of whether to purge the carbon dioxide (CO2) or feed it to plants, for example, becomes important.”

C02 in the water will drive down the pH.  “We have found that the sea urchins require a quite a high pH of around 8.2 to keep growing, yet water coming from the fish has low pH, which harms the sea urchins.  So how do we engineer the system to provide that?” Wills asks.

The seaweed takes up the nitrogen, phosphorus, and CO2 by photosynthesis during the day.  But at night when the plants shut down, CO2 is produced and the pH goes down.  “So we have to engineer for that,” he adds.

The central hub contains both a drum filter, and a biofilter, an ex situ biofloc reactor system, and specialty filtration for each loop.  This combination allows researchers to selectively manage the fish wastes.  Some waste can go directly to the sea cucumbers or the sea urchins, and some can be partially filtered and go to the oysters.   Water goes outside to the plants via their own loop, which then returns to the filtration hub.

The ex situ bio reactor creates a biofloc similar to what could be grown in a pond or tank system for shrimp.   Wills says it is easier to work with the biofloc than with fresh solid wastes from the fish.  They are experimenting with various ways to feed the biofloc back to the shrimp, sea urchins and sea cucumbers.

The prototype is indoors, with only the plant growth area set outside for sunlight.  Heating is not a problem at the FAU site, which is south of the frost line, but Wills suspects a northern installation would entail significant costs.  “We are looking at high-efficiency high-flow heat exchange systems to capture heat in the indoor component,” he says “A greenhouse would be a good addition as well.”

They have shut the system down and restarted it with a crop of cobia (Rachycentron canadum).  Red drum (Sciaenops ocellatus) will be next.  The fish won’t really make a change to the system.  “They all pee and poop, although cobia and red drum are twice as efficient as pompano,” explains Wills.  “We are going to be adding commercial sponges as a filter feeder.”

Will the system be cost-effective?

“Economic models feel like they should be easy but they are not. There are so many things that could be considered as inputs or outputs that we are looking at,” says Wills.

“This project is in the technological feasibility stage,” he adds.  “It’s a chicken-and-egg question. How do we prove technical feasibility to drive the data to do the economic feasibility?  Until we get these animals and plants to live together and not kill each other, we can’t come up with the economic data.”

A more traditional approach would have been to do scientific studies on the individual species and then design the system.  “Our funders wanted us to take a more empirical approach, build the system, break it, find out what went wrong and fix it,” says Wills.  “That’s been a really exciting way to operate.”

“After five years we have a system that should give us some reliable economic data,” says Wills.   “I was asked this question even before we put one piece of PVC pipe together.  I really want to put an economic model out there but I want it to be as realistic as possible.”