Cultural fit and soft skills rank high, but technical training is a game-changer 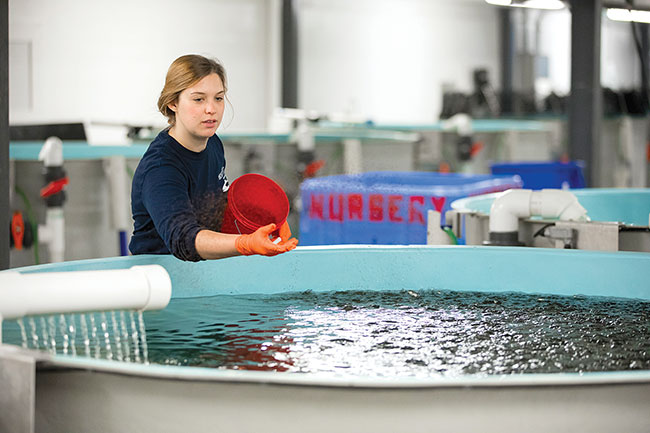 When Atlantic Sapphire suffered a second salmon die-off at its Denmark facility in March, jitters about land-based aquaculture reignited among investors and insurers. At the core of the concern: there is just not enough talent to safeguard the future of so many new RAS ventures.

The industry needs to grow its pool of competence, leaders agree. Otherwise, companies are just locked in a game of musical chairs.

Yet despite the challenges and the skeptics, RAS forerunners are steely eyed in their focus on recruiting motivated people and building strong cultures. From the well-funded Norwegian salmon enterprises to an entrepreneurial pompano start-up in Florida and a steelhead farm in Upstate New York, they are pursuing different approaches, but share a common philosophy.

“Fish welfare always comes first,” says Marianne Naess, commercial director of Nordic Aquafarms. “I think it is very important to build a culture where people are passionate about what they do.”

People feel more secure with job candidates they can “plug and play,” notes HR generalist Danielle Dorter, who has staffed hard-to-find talent both for start-ups and large organizations in several industries. There’s a preference for people who have done the same job somewhere else, so that they can hit the ground running in the new company.

But that is difficult in RAS. Although fish farming has been around for decades in North America, the new RAS operations are on a different scale and, in key ways, represent an emerging industry—one reliant upon technology and a textbook example of risk concentration. As Atlantic Sapphire knows, a hydrogen sulfide event, or a power outage, can result in massive fish deaths.

This has led Myre to label RAS “very much a loss business for insurers today.”

Adapting skills from adjacent industries
HR professionals often shorthand staffing solutions as “build or buy.” But in RAS, there’s little time to “build” and few places to “buy” people who have held the same roles. An alternative workforce strategy is to look to adjacent industries.

“Candidates might not have the required ‘role experience’ but have the skills that allow them to more quickly upskill toward the skills required for a given role,” says Gartner, a global research and advisory firm.

When Nordic Aquafarms hired a senior vice president of projects in California, Naess chose someone with over 20 years of experience in EPC (Engineering, Procurement, and Construction), a type of construction contracting in which the risk for delivering on time and on budget rests with the contractor.

Naess, who started her career in management consulting, says that staffing from adjacent industries might be right for some positions, but not others. She emphasizes that a broad array of skills will be required for RAS operations. In both Maine and California, the company will need people at different levels in several areas, including fish production, technical, maintenance, and fishing processing.

With two RAS operations up and running in Norway and Denmark, Nordic Aquafarms installed in its Maine project an experienced production director from Europe. But it was able to find Maine natives with strong aquaculture credentials to lead technology and production areas.

Naess is confident there is ample transferrable aquaculture and marine biology knowledge in Maine and points to hatcheries as an adjacent arena with potential. In California, even before it had permits, Nordic Aquafarms began working with a local community college on an aquaculture program.

Most of the team at steelhead RAS farm Hudson Valley Fisheries in Upstate New York either have fisheries or a marine biology degree, says CEO John Ng. Their background came in handy but the young team—comprised mainly of men and women below 30—learned on the job, he says.

“A number of our staff trained in house. Many were part of our original construction team to help build the tanks. They grew up with us and now they’re part of the actual fish farming operations. That really speaks to how my team is.”

RAS players say that adjacent fields, such as hatcheries, are among the places where they scout for talent Credit: L’Étang Ruisseau Bar

At pompano farmer Aquaco, a number of staff were on board a year before the start of operations to create a bond between its mission and the team Credit: Aquaco Farms

What companies are looking for
Having the right people in the right jobs is one way to mitigate risk. Creating a strong ethical compass within an organization also reduces errors and process breakdowns, say risk managers. RAS ventures agree that, first and foremost, they want people who share the company’s values.

Earlier this year, Naess terminated an executive in California after a “trophy” photo surfaced of him with a lion he had shot. “Values are not worth anything unless you act on them,” she says.

Similarly, Kirk Havercroft, CEO of Sustainable Blue in Nova Scotia, wants his staff to represent the company’s mission. As he said during RASTech’s RAS Talk podcast, his team sometimes spends evenings together screening conservation documentaries. “This is not 9 to 5. There are times when we might be grading fish until 10 or 11 at night. You can only do that if you’ve bought into the mission,” he says. “It’s a mindset.”

Aquaco, a new RAS farm that starts harvesting pompano this year, created a bond between its mission and functional leaders by bringing them on board a year before their day-to-day work began. Says CEO Joe Cardenas, a former commercial banker, “I wanted them there as part of the build, from literally ordering the equipment and installing it to then managing it.” He also gave them equity in the company.

Clearly, these new RAS players are pioneering a different approach to risk management. Instead of seeing it as a compliance issue solved by creating rules and enforcing them, they are creating cultures of ownership and belonging.

The fine art of assessing talent
Selecting the best people starts with carefully crafted job descriptions. In addition to the competencies or “hard skills” related to each role, HR expert Dorter suggests including three or four “soft skills” or personality traits. “They make or break success,” she adds.

To cultivate these traits in the workplace, those behaviors should then be reinforced at every stage of the employee lifecycle, including performance evaluations and merit planning.

HR head Cristina Espejo told RAS Talk listeners that Atlantic Sapphire values a highly structured mindset and the ability to work under stress, noting that people with those traits are the ones who will find a solution when an alarm goes off.

“What matters is you are prepared with an open mind, you’re curious and willing to learn and accept what is brand new,” says Havercroft. He advises that candidates come in with a degree of humility so that they can learn a new system.

Naess echoes that, saying “There is room for humor and not taking yourself too seriously all the time, although you take your work seriously.”

But how does an HR recruiter find out if a candidate really has these traits? Dorter recommends behavioral interviewing that utilizes questions like “Describe a time when [you had to solve a problem under stress]” or “Give me an example of [how a structured approach governs how you work.]” (See Q&A with an aquaculture recruiter on page 14.)

Onboarding to boost productivity early
To get new employees up to speed as quickly as possible, Sustainable Blue has introduced an internal training syllabus specific to its building, system, and processes. Everyone has to take it and pass an exam afterwards. “We’ve had real success with it,” says CEO Havercroft, adding “It was the piece of the puzzle we were missing.”

Similarly, at Maryland’s Horn Point Hatchery, which deploys state-of-the-art automation, a basic manual backs up what interns learn on the job. Initiation includes a two-week intensive rotation among five divisions so that employees see the big picture. Then they can use the manual for reference.

Says Julie Trommater, who oversees the algae lab, Horn Point interns have gone on to start oyster farms, run hatcheries, and work in biofuel. Maybe they will seize opportunities in RAS, too.