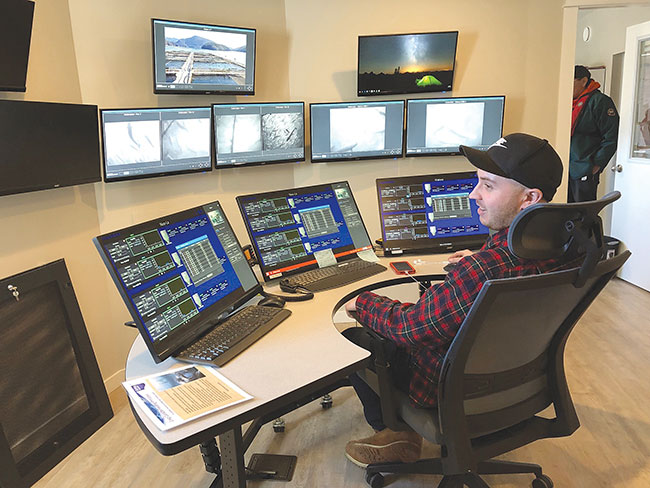 Much of the data—water temperature, salinity, oxygen levels, presence of algae and sea lice—promises to play a critical role in managing the impact of climate change.

“When we have the real facts, it takes us to a new level of how we farm and the decisions we make. It’s going to be important to better understand our oceans,” Trethewey says.

The first benefit of data capture is that it moves individual observations into verifiable patterns. Growers can acknowledge seasonal rhythms and long-term cycles and take actions based on them. “You start to move away from being reactive to proactive,” says Trethewey.

Based on 20 years of data on plankton, for example, he anticipates that in the spring, there will be diatom blooms. Farmers can be ready with aeration equipment before that occurs. “We don’t need the fish to get stressed,” he adds.

Data also guide long-term production cycles. For example, in different locations, smolts are raised so that harvests occur prior to their riskier second summer of plankton.

When Trethewey overlaid tide tables on temperature and oxygen saturation data, he was surprised to see “massive swings” in a 24-hour period. Since fish appetite is directly connected to oxygen saturation, that variation explained why fish that were fed earlier in the day were hungrier than those that were fed later. Grieg changed the regimen to ensure an initial pass of all pens at roughly the same tidal point.

Another maxim of salmon farming is not to feed fish during harmful algae blooms. But making that decision can be difficult and costly. So, for plankton analysis, Grieg has equipped all farmers with Internet-enabled microscopes. After uploading the data, they speak with a specialist in the environmental department who will make the final decision to continue feeding or not.

If aquaculture’s progress with data continues—from capture to analytics to predictive capabilities—it may even help avoid the type of mortalities that occurred in Newfoundland last fall. For short-term temperature events, semi-closed pen systems can be a remedy. In a trial this year for a temperature-challenged area, Grieg installed waterproof tarps 20 meters deep and aerated deep water up. The entire system was digitalized. “We brought it from 20 degrees down to less than 14 degrees, a perfect condition for those salmon,” says Trethewey.