Sometimes you can see the future by looking to the past.  Connecticut shellfish farmer Bren Smith would walk by a mural on the wall of the Madison post office that depicts farmers gathering seaweed from the beaches of Long Island Sound in the 1930s. “I didn’t make the connection until I was growing kelp myself. One of the things it was used for was fertilizer.”

“The last thing I really wanted to do was grow kelp,” admits Smith, but kelp’s nature as a fast-growing crop that requires low maintenance was hard to resist. “You do almost nothing to it, just a drive-by every two weeks to be sure the gear isn’t broken,” he says.

The need to generate various sources of income led Smith to adopt the IMTA model. “Every commercial fisherman (he used to be one) knows one needs a diverse source of income. I was also looking for other things to grow to use all of the water column.”

IMTA as a farming concept has been introduced in the Western world in 2004, although the process of rearing multiple fish species (polyculture) in one location is ancient; the Chinese have been doing it for ages.

Smith shares with others the IMTA “gospel” but he thinks IMTA’s full name — integrated multi-trophic aquaculture — is “horrible and alienating.” “We are trying to attract people to ocean farming so we call it 3D Ocean Farming,” he says. (Dr Thierry Chopin, whose research focuses on IMTA and was instrumental in promoting the concept, says there have been over 1,300 publications on IMTA since it was introduced in the Western world in 2004, so he won’t change its name, he said at Aquaculture Canada 2018.)

Through GreenWave, a nonprofit Smith founded (see side bar), people across the US and overseas are learning about the benefits of “regenerative ocean farming.” “Shellfish like mussels taught me that we can farm to restore rather than deplete. As farmers, our crops can breathe life back into the oceans while feeding local communities,” Smith wrote on the website of a GreenWave sponsor.

Smith took his cue from the oysters when he was developing his version of IMTA.  “I like growing things that don’t need to be fed and can’t swim away. With all of the things we grow we are able to do simple rope culture and that keeps the infrastructure costs down.”

Without fish in the IMTA equation, this method of farming makes much more economic sense for small to medium size farmers, Smith says.  “Most IMTA starts with fish, to which other things are added. What I’ve done is I simplified it and lowered the barrier to entry by making things cheaper.”

“From my 20 acre farm I harvest 10 to 30 tons of seaweed and 250,000 shellfish per acre a year. With our model, an ocean farmer can gross $300,000 a year and provide two to three full-time jobs and seven to 10 seasonal jobs,” he adds.
Smith grows clams on the ocean floor at the bottom of his lease. But having his oysters buried by storm surges led him to pull them off the bottom. Oysters are in suspended trays, scallops are in lantern nets and mussels in socks all hanging from a long line.  The kelp is grown on the long lines in the winter.

While labour is the top input in this model, Smiths says it varies between crops.  “Clams just sit in the mud, we don’t cover them with nets so we lose some, but we also don’t have to do anything,” he says.  “Oysters require a fair amount of work for a good product, and scallops are just a pain.”

Kelp harvest is labor-intensive.  When Aquaculture North America spoke to Smith in May, he was in the midst of harvest and watching out for the sweet spot that would allow for maximum growth. “They can double in length in May. But we have to harvest them before they start to become bio-fouled in the warmer water temperatures, or they will have to go to fertilizer.”

Smith sells his harvest locally under the brand Thimble Island Ocean Farm. “Our scallops don’t grow very big adductor muscles in the lantern nets so we sell them whole to restaurants and people eat them raw like oysters.”

Kelp presents a different marketing challenge.  “The problem with kelp is nobody wants to eat it,” says Smith. But significant progress is being made, he says, by marketing kelp as “the new kale,” by moving it to the center of plates, and talking about “merroir” (like “terroir” in wine industry jargon) and “arugula from the sea.”

There are high-end chefs experimenting with everything from kelp pasta to using it to flavor cocktails.  Smith says they have also had success partnering with other food processors, including one that’s making kelp-and-mushroom jerky.

“I thought it would take 20 years to build a market for those specialty items, but we have back orders for half a million pounds of kelp right now,” Smith says.

The other strategy was to take a page from the soy producers’ playbook.  “The soy industry got together and realized they weren’t going to get many Americans to eat soy, so they put it into everything,” Smith explains, only half joking.  “The great thing about seaweed is that it’s a human and animal food, it goes into cosmetics, pharmaceuticals, fertilizer and biofuels.  We can stuff it into everything.

“We’ve had a lot of success with it, our challenge now is permitting and developing hatcheries fast enough to meet the demand.”

Smith is now exploring ways to stabilize output from a given lease using remote sensing.  “As an ocean farmer, your soil turns over a thousand times a day. Some years we get kelp that is three feet long, some years it is 20 feet. I need to know about the current, light penetration, and where the nutrients are in the water column. Then I can go out and raise or lower the farm to where those nutrients are.”

GreenWave is a farmer-run organization that helps attract, educate and support new shellfish farmers.  “My first goal is to create jobs,” says Bren Smith, the organization’s founder and executive director.  He knows from experience that new farmers need all the help they could get. “I was a terrible at first, I killed most of them,” says Smith, recalling his first foray into shellfish farming.

The nonprofit helps farmers with site selection and the permitting that will get them started. They build hatcheries for seed and provide a distribution hub and market research. “The US simply does not have a functioning government to do this kind of training and industry development, like you would find, say, in South Korea,” says Smith. “We decided we would do it ourselves.”

Training is free, thanks to generous sponsors like outdoors clothing company Patagonia.  GreenWave has supported new farmers in New England and Alaska and is moving into California. “We’ve had requests from virtually every coastal state and over 20 other countries,” says Smith.  “We have always been open source but we have a grant now to put all of our material into online learning, which we hope to have up by this fall.”

GreenWave’s program has resulted in 17 farm startups, which are all currently operating. Eight farmers are currently enrolled in the FIT (Farmer-In-Training) program, and 10 more are expected. 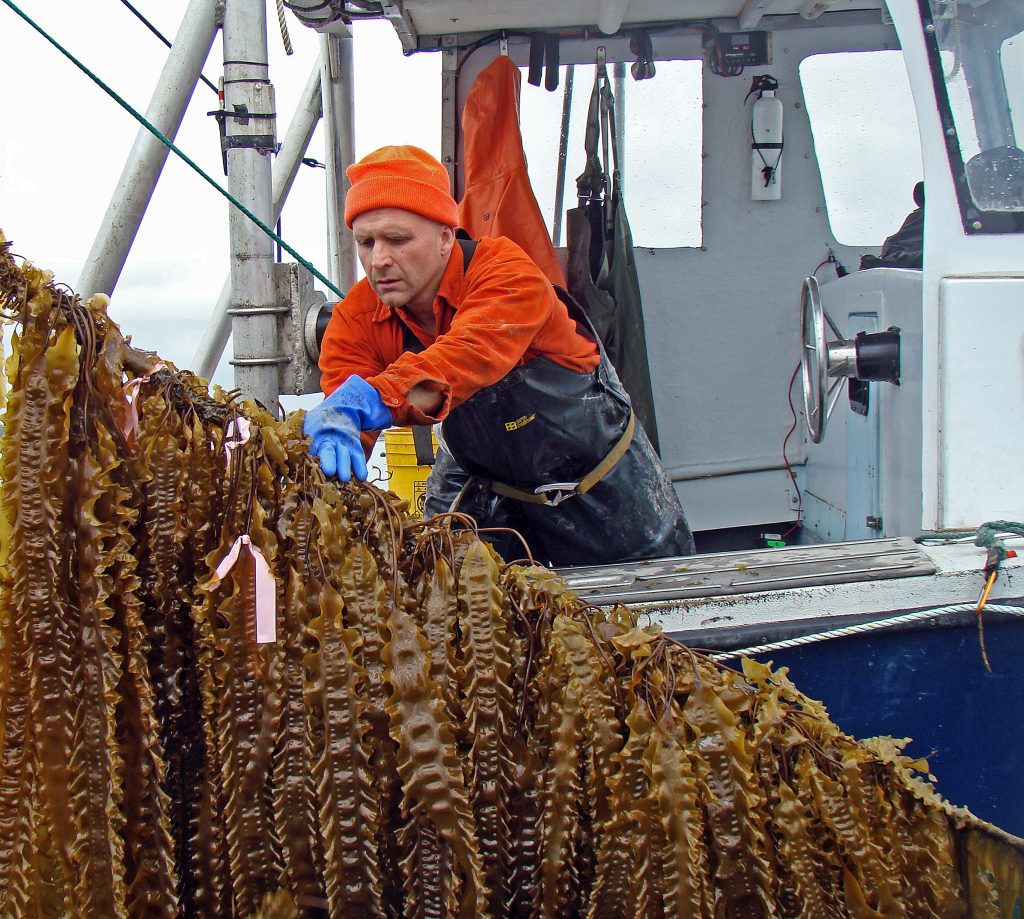 Without fish in the IMTA equation
Print this page