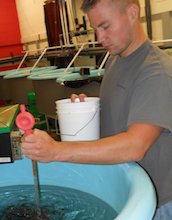 An eugenol based sedative - AQUI-S®20E - used to sedate tilapia and yellow perch during fish transport has the potential to allow increased loading densities ... resulting in lower costs.

Building on industry knowledge, recent research at the University of Wisconsin-Stevens Point suggests higher than standard densities can be achieved during transport using AQUI-S®20E, which could be a cost saving for the industry.

One significant operational expense in the aquaculture industry is fish transport costs, especially as fuel prices continue to rise. Not only is fuel an expense during transport but also labor, oxygen, vehicle maintenance, and fish mortality during and post-transport. Increasing fish loading density above the industry standard during transport would definitely increase farmer profit, enabling more fish per gallon of fuel and decrease transport trips. However, high densities can further decrease oxygen levels and cause ammonia levels to spike, resulting in higher fish stress and aggression.  This can lead to great mortalities.

To lessen physiological imbalance, aggression, and other stressors experienced at high loading densities during transport, the effects of various additives, including sedatives, need to be explored to reduce fish mortality under these conditions. Although MS-222 is the only FDA-approved sedative in the United States, a eugenol based sedative AQUI-S®20E (10% eugenol, Lower Hutt, New Zealand) has received attention in aquaculture due to the potential for decreased withdrawal time. AQUI-S®20E is a product being evaluated by the US Food and Drug Administration, Center for Veterinary Medicine as an immediate release finfish sedative. Because AQUI-S®20E is a relatively new sedative to reach the market, data are needed to assess its effectiveness for animal welfare.

In cooperation with the US Geological Survey, Upper Midwest Environmental Sciences Center, University of Wisconsin-Stevens Point graduate student Aaron Cupp, conducted a research study with the hypothesis that with the addition of AQUI-S®20E, increased loading densities could be achieved without increasing mortality. The study included both yellow perch Perca flavescens and Nile tilapia Oreochromis niloticus fingerlings as model species to examine behavior, recovery from sedation, ammonia accumulation, eugenol uptake from water, survival and metabolic rates when exposed to AQUI‑S®20E through a simulated transport. The fish were exposed to 0 to 300 mg L-1 AQUI-S®20E at loading densities up to three times the current industry standard during simulated transport and static respirometry.

In yellow perch, higher concentrations of AQUI-S®20E resulted in only light sedation but >95% mean survival 7-day post-transport, and decreased metabolic rates at loading densities up to 360 g L-1 in 17°C water.  The light sedation observed suggests a decrease in physiological stress and lower behavioral activity with low physical injury from aggression or in contact with tank walls. The yellow perch showed to be a good example in demonstrating how greater densities can be achieved by lowering fish stress, which can have a large impact in increasing survival rates.

In contrast, tilapia held at 22°C showed minimal changes in metabolic rate and sedation when exposed to higher concentrations of AQUI-S®20E, but had high mean survival (>90%) following a 10 h simulated transport at a loading density of 480 g L-1 (two times the industry standard). Tilapia recovered rapidly following exposure to AQUI-S®20E at all loading densities. While rapid recovery time is desired following sedation, the duration of reduced behavior was less than what was observed for yellow perch. This suggests that sedation of Nile tilapia with AQUI-S®20E may benefit fish haulers primarily during initial loading and transport.

When using AQUI-S®20E to sedate fish during transport, it is important to consider how species and loading density will impact sedation. This study suggests that loading density appears to have a negative effect on the level of sedation reached. Additionally, individual species appear to respond differently to sedation. Overall, the study has indicated that AQUI-S®20E sedation during fish transport has the potential to allow fish haulers to transport at increased loading densities. The effectiveness of sedation and fish transport are impacted by fish species, fish size, temperature, loading density and duration. To more closely match the numerous biotic and abiotic situations for hauling live fish, it will be important to assess each of these variables and provide additional data to fish haulers. Particularly, fish life stage and temperature are potentially important given the diverse conditions under which fish are transported (i.e. biotic and abiotic factors that are beyond the control of the fish hauler).

To access the complete publication of this research, see: www.aquaculture.uwsp.edu>Current Projects>Effects of Eugenol Sedation.

Written by Emma Wiermaa from the thesis and research by Aaron Cupp.