A life-cycle analysis and testing alternative feed ingredients support further inroads for the use of microalgae oil in aquafeed formulations. 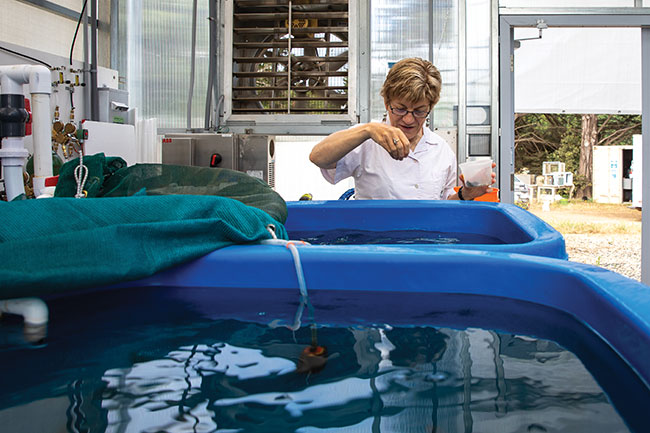 There are several potential approaches that can be taken to reduce nutrients in the wastewater from trout farms (and other land-based aquaculture operations), which is an important sustainability goal for the industry.

According to the United States Trout Farmers Association website, there 334 trout farms in the US. However, the organization did not provide insight into where the wastewater goes for these farms (municipal wastewater treatment systems, for example) or how many farms have their own water treatment systems and what type. The group would also not comment on whether phosphorus (P) and nitrogen (N) excretion from US trout farms is more of an issue in certain states, and so on.

One sure way to reduce nutrients in effluent is through changes in feed. Low-polluting fish feed formulas contain as little N and P as possible, and they also provide these nutrients in forms that are more easily digested and absorbed. This all results in a minimizing of the amount of these nutrients that fish excrete.

A team based at the University of California Santa Cruz is just beginning new collaborative research to develop, test, and evaluate new low-polluting fish feed formulas for farm-raised rainbow trout. The study is based at UC Santa Cruz’s ecological aquaculture lab, and is supported by a three-year US$1 million federal grant.

They will create experimental aquafeed formulas that contain marine microalga as an ingredient, with the resulting formulas field-tested at working trout farms in California.

This will first involve testing various methods for processing microalgal ingredients to make them as digestible as possible for rainbow trout. They will then figure out how much microalgae can ideally be substituted for marine fish-based ingredients. This will be followed by developing the actual diets, and trials with trout to see how they perform and also how much N and P is in their effluent.

This research is a continuation of research done for years by Sarker, Kapuscinski and various colleagues to examine recycled leftover biomass from the commercial production of marine microalgal species (such as Schizochytrium sp.) for human omega-3 dietary supplements and aquaculture feeds. There has already research published on how combining different marine microalgae can be used to replace traditional fish meal and fish oil feed ingredients sourced from wild-caught fish.

Of course, it’s important to also evaluate the economic feasibility of the new feeds at a commercial scale, and that will be done once the feeds are prepared.

In addition, the team will do a ‘life cycle assessment’ or LCA to compare the overall environmental impact of the new formula with conventional feed across a wide range of categories such as greenhouse gas emissions.

Life cycle study completed
This research on how microalgae can be used to make low-polluting fish feed builds on a new LCA that Sarker, Kapuscinski and others of UC Santa Cruz’s Department of Environmental Studies just published, an analysis which was led by Dr. Brandi McKuin.

This new LCA examines the environmental benefits and impacts of using the marine microalga Schizochytrium sp. as an alternative aquaculture feed ingredient to replace fish oil sourced from wild-caught fish.

The replacement of wild-caught ingredients in aquafeed is an industry priority. Here are some statistics from McKuin and her colleagues which illustrate the urgency.

Production of aquafeeds is expected to increase to 73.15 million tonnes by 2025. Currently, about 16 million of the 29 million tonnes of the forage fish annual global catch currently goes into aquaculture feed. Worldwide, the aquaculture sector consumes 68.2 per cent of total global fish meal production and 88.5 per cent of total global fish oil production.

At current rates of wild-caught fishmeal and fish oil consumption, production of aquafeed could outstrip the supply as soon as 2037, 15 years from now. That time will come sooner if global fish stocks are affected for any reason.

Inside the assessment
To do the LCA, the team used data from published literature and patents to model the sustainability impacts of ingredient options, with input gathered about their assumptions from volunteer industry advisors.

McKuin and her colleagues also looked at several different methods of preparing Schizochytrium sp. for inclusion in fish feeds, since it can either be used as whole cells or processed into oils using microwave or solvent extraction techniques.

Overall, the LCA found that Schizochytrium sp. could be a more sustainable feed ingredient than fish oil in categories like global warming impact and use of biotic resources from living organisms.

However, in other areas of the assessment, there were comparatively-greater environmental impacts. These include land use, freshwater use, and nutrient pollution potential in both marine and freshwater bodies of water, relating to steps in microalga production that are linked to land-based agriculture.

Options for industry
The team found that combining Schizochytrium and canola oil in aquafeed supports significantly-decreased use of wild-caught fish, but how algae is cultivated needs to change in order to mitigate environmental sustainability trade-offs. 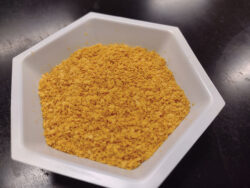 McKuin explained that future innovations on this front could involve “reuse of carbon-rich biomass wastes” instead of sucrose or glucose that’s currently used. Biomass is currently extracted from crops such as sugar cane, beets or corn, with sugars processed from renewable waste products like crude glycerol from biodiesel production (for example, from soybean oil or recycled grease).

She notes that substances like crude glycerol are attractive because they are low cost.

But “scaling up production from these sources presents logistical challenges that will require innovation,” McKuin said. “An example of the type of innovation needed is to co-locate Schizochytrium [production sites] with the renewable waste production.”

Another possible carbon-rich biomass waste source is ligno-cellulosic biomass from non-food sources such as sugar cane bagasse, corn stalks, leaves and woody biomass. “However, this would require processing steps to break down their complex carbohydrates into simple sugars,” said McKuin, as simple sugars are the only fuel Schizochytrium can utilize.

Schizochytrium production
Kapuscinski explains that while Schizochytrium oil is already being used in some commercial aquafeeds, it’s just beginning to realize its full potential. “This industry,” she said, “is expected to grow. This early-stage of adoption is a good time to provide our deeper analysis of environmental sustainability of Schizochytrium as an alternative to fish oil.”

In terms of how much its use should increase each year to displace marine-based oil, and how that might go, McKuin first explains that there are several factors that determine whether or not fish oil is generally replaced by an alternative ingredient. “These are,” she said, “a consistent and large supply with sufficient availability, cost competitiveness and equivalent nutritional value.”

On these fronts, Schizochytrium has the potential to fill the “oil gap” as aquaculture expands (the gap in volume of oils that have equivalent levels of omega-3 fatty acids as fish oil), but McKuin says producers need to overcome scale-up and production cost hurdles.

“Investment in R&D could help to address these bottlenecks,” she said. “Our lab previously conducted a type of economic analysis to estimate the implied market prices of two marine microalgae, defatted Nannochloropsis oculata meal and whole cell Schizochytrium sp., and the economic conversion ratio of formulated feed. Going forward a robust techno-economic analysis is needed to better understand the economic viability of Schizochytrium.”

As to whether companies could be mandated to switch gradually away from marine-based oils and when, Kapuscinski points to the fact that adoption of new innovations generally occurs when there are various factors in place, such as the availability of superior products, incentives that boost demand (in this case for example, the F3 Challenge) and policy actions like federally-funded R&D. “It’s never one thing,” she said.

Will the industry ever reach a point where no marine oil is being used? Of course, it’s hard to say.

Kapuscinski’s response is that she and her team think Schizochytrium has the potential to complement the supply of oils high in omega-3 fatty acids from fisheries that are sustainably managed, and from other sources. “This could change in the future,” she said, “but making a good projection requires conducting an analysis that was beyond the scope of our study.”

Overall, this study does confirm that microalgae oils could be more sustainable feed ingredient than fish oil in some categories, but each benefit and impact related to the environment have to be examined within global and regional contexts.

When the LCA was first released, Kapuscinski stressed that there are always trade-offs in a life cycle assessment. “There is no one silver bullet,” she stated, “but laying out estimates like these of what the impacts are, based on the best scientific evidence available, can really help with informed decision making in sustainability efforts.”