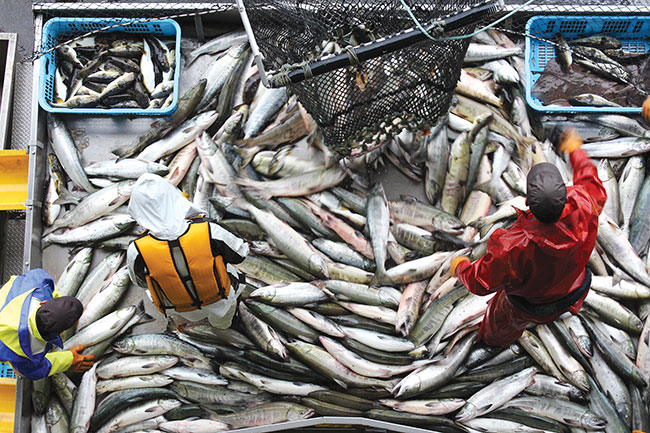 A new report reveals that endangered wild salmon passing along Alaskan rivers on their way home to spawn in BC are being caught ‘in the millions’ by Alaskan fishermen Photo:©cassis/Adobe Stock

Thirteen years after Canada launched an inquiry into the decline of sockeye salmon in the Fraser River in British Columbia, there remains no clear-cut answer as to why wild Pacific salmon populations are fluctuating.

While the inquiry body, the Cohen Commission, listed more than 20 activities affecting Pacific salmon populations – among them climate change, loss of habitat, predators, non-point sources of contaminants and forestry – the farmed salmon industry has disproportionately been blamed and condemned by activists for the phenomenon.

It is against this backdrop that the BC provincial government announced a landmark decision in 2018 to shut down 17 Atlantic salmon farms in BC’s Broughton Archipelago “to help reduce harm to wild salmon.” Then, in December 2020, Fisheries and Oceans Canada (DFO) announced plans to shut down 19 farms in the Discovery Islands in BC despite its own scientific studies proclaiming salmon farms pose only “minimal risk” to wild salmon in the area.

Information regarding the phenomenon continues to evolve. In January 2022, a new report revealed that “millions” of wild salmon passing along Alaskan rivers on their way home to spawn in BC are being caught by Alaskan fishermen.

The report was a result of an investigation commissioned by the Watershed Watch Salmon Society and SkeenaWild Conservation Trust as part of the annual review of the Pacific Salmon Treaty between Canada and the United States. The treaty manages transboundary interceptions of Canadian wild salmon between the US and Canada. It was set up with the idea that the salmon in the ocean belonged to the country where the salmon originated from (were born), not where the salmon fed. It is a contentious part of the treaty because of its impracticality – whose fish are they? The identity of the salmon can only be evaluated long after they are caught (laboratory analysis required) not before they are caught.

The new report identified those in southeast Alaska’s District 104, located on the outer coast of the Alaska panhandle, as the most prolific harvesters, where “nearly all” of the salmon and steelhead caught are bound for streams in Canada, elsewhere in Southeast Alaska, or other US states such as Washington and Oregon.

In 2021, they harvested roughly 800,000 sockeye of mainly Canadian origin, in addition to “tens of thousands” of Canadian Chinook and Coho, and “a large but unknown numbers” of co-migrating Canadian pink, chum, and steelhead. Many of these species are threatened and endangered populations, the report said.

The fact that “salmon adults migrate back to their home rivers and streams to spawn, some are caught, or intercepted, by commercial fishing” is acknowledged in the Pacific Salmon Treaty between the two countries. But the sheer numbers of Canadian wild salmon intercepted in Alaskan fisheries caught conservations groups by surprise.

“We knew the Alaskans were intercepting a lot of BC salmon, but the numbers in this study are staggering. I’m also appalled at their failure to study their bycatch of non-target species, which Canadian fishers are required to do,” said SkeenaWild Executive Director, Greg Knox.

The Pacific Marine Conservation Caucus says it is difficult to have accurate numbers because of the “lack of assessment information.” It also said that because of this, “it is unknown what the impact of this fishery was on other Canadian-origin salmon (pink, chum, Coho, and chinook) and steelhead.”

At the time the investigation was conducted, Canadian fisheries have been closed since June 2021 (until further notice) in order to rebuild depleted stock of BC wild salmon.

“Alaskan fisheries are now the biggest harvesters of a growing number of depleted Canadian salmon populations. Canadian fishers and taxpayers are making incredible sacrifices to protect and rebuild our salmon runs, while the Alaskan interception fishery continues unchecked. It is irresponsible of both countries to continue to allow this.”

Adding to the irony is the fact that Southeast Alaska seine fishery is Marine Stewardship Council-certified. MSC certification means that a fishery is “working to minimize harm to the ocean overall, not just to specific species.”

In an email to Aquaculture North America, MSC said the Southeast Alaska seine fishery’s MSC certification is valid for five years and expires in May 2024. It and other MSC-certified fisheries undergo annual audits to ensure they continue to meet the standard.

“Fisheries operate in dynamic environments that are constantly changing. New information about a fishery or status can be submitted to an assessor for consideration during annual audit cycles for certified fisheries,” it said.

The Pacific Marine Conservation Caucus notes that a “loophole” has allowed the fishery to get away with MSC certification because the fish are returning to another jurisdiction.

“The BC salmon industry lost its MSC certification when it could no longer convince MSC that it was sustainably managing its salmon fisheries. Alaska could face similar risks,” it added.

Closing interception fisheries in Southeast Alaska may solve the problem but there’s little incentive to do this because of sockeye is worth ten times the value of a pink salmon, it added.

The organization acknowledged that with today’s consumers increasingly insisting on knowing where their food comes from or how it was caught or raised, the reputation of wild salmon from Alaska could suffer because of this issue.

“If the market were to lose confidence in the sustainability of Alaskan salmon management, it would erode Alaska’s reputation in international markets.”