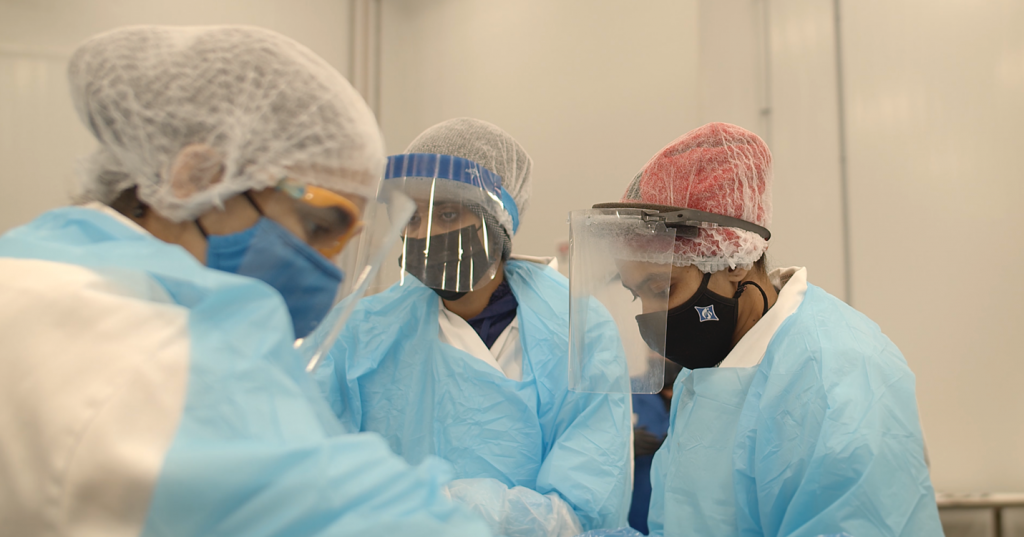 Fish processing workers in Surrey, B.C., will be among those impacted by the Discovery Islands closure, according to a new economic analysis from RIAS Inc. (Photo: BC Salmon Farmers Association)

A new economic analysis reveals the extent of the economic impact in Surrey, British Columbia, following a decision by the federal Liberal government to close salmon farms in the Discovery Islands region off Vancouver Island’s west coast.

While Campbell River is Canada’s salmon farming capital, Surrey is the hub of salmon farming in Metro Vancouver, home to numerous operations in salmon feed milling, fish processing, trucking, packaging, and the provision of goods and services.

“The salmon farming industry in B.C. is interconnected, with an extensive supply chain,” said John Paul Fraser, executive director of the B.C. Salmon Farmers Association. “Closing our farms in the Discovery Islands shuts down a quarter of our production in B.C., which significantly reduces how much feed is needed, how many fish will be coming into the processing plants, packaging, the number of trucks needed to transport fish, and shipping. Much of this work is done in Surrey.”

The BC Salmon Farmers Association released the report prepared by RIAS Inc., an independent economics firm, analyzing how the federal government’s December 17, 2020 decision closing salmon farms in the Discovery Islands area puts jobs and economic development at risk in Surrey, B.C. This analysis is a companion to a larger report by RIAS Inc. released February 23, 2021 titled, “Consequences of the Decision to Shut Down Salmon Farming in the Discovery Islands.” Discovery Islands farms produce a quarter of the farm-raised salmon in B.C.

Indirect and induced economic impacts province-wide include more than $363 million in annual revenues, $122 million in GDP, more than 1,100 full-time jobs, and $65 million in salaries

“The report very likely underestimates the impact of salmon farming in Surrey,” said report author Doug Blair, an economist and president of RIAS Inc. “It doesn’t account for the likelihood that the impact in Surrey will be outsized as the salmon farming industry faces a 24 per cent decline in production, it will be forced to consolidate processing operations on Vancouver Island to maintain economies of scale. What is clear, however, is that a substantial number of jobs will be lost in Surrey as salmon farmers attempt to adapt to the impacts of the federal Liberal’s Discovery Islands decision over the next year.”

The BCSFA is calling on the federal government to consider a more responsible path forward to minimize impacts on British Columbia’s coastal communities. B.C. salmon farmers are asking that the decision be set aside to give everyone with a stake in salmon farming time to develop a plan to minimize the serious impacts of this decision.

Millions of juvenile salmon already in hatcheries and other facilities will have to be destroyed if the decision stands. Salmon farmers are calling on the government to allow them to transfer fish already in their systems to the farms to complete their lifecycle.

Salmon farmers are also asking the government to bring all parties together in an inclusive and transparent process to find a better way forward and create unity in communities.

The full report can be found here.