Farmers can grow it, but now what? 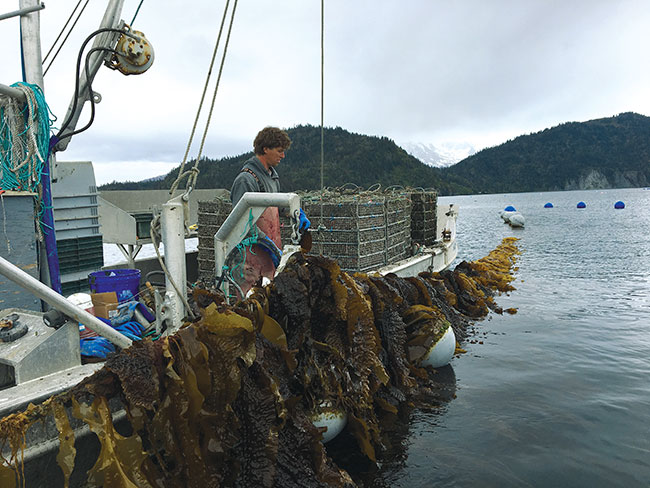 Cultivation of seaweed in the US faces big barriers: the lack of commercial-scale processing, competition with lower-cost Asian imports, inconsistent oversight, and increasing food safety concerns, say farmers and researchers.

These problems are preventing farmers from harnessing seaweed’s full potential.

“Seaweed globally is upwards of a $12-billion industry, just growing and wild harvesting it, whether for cosmetics, filler for food or for human consumption. We are really in a good situation here in North America to provide the best seaweed in terms of nutrient and health value to the rest of the world due to our water-quality regulations. But we are so far behind in terms of growing in the oceans and aquaculture,” says Greg Martino, co-owner of Cottage City Oysters on Martha’s Vineyard.

Dan and his brother Greg were recipients of the first license to pilot a commercial sugar kelp farm in the State of Massachusetts in 2016. Other oyster farmers in the country have also since branched out to seaweed farming in order to diversify income and add a winter crop.

At Alaska Shellfish Farms in Halibut Cove, Alaska, tons of seaweed is yet to be harvested due to the lack of large-scale seaweed processors in the area, says Weatherly Bates, who runs the farm with her husband Greg.

“With 23 acres of longlines, we have an immense kelp forest that grows until June, then it fades away. We are hoping a kelp processor starts up,” says Bates.

Martha’s Vineyard led the kelp movement by having the first experimental lines in state waters roughly five years ago.

“It has started to take off in terms of another crop to grow in New England. Now we’re starting to really see a jump in seaweed farming around all the coastal areas here in the United States and Canada,” says Dan Martino, co-owner of Cottage City Oysters.

Proponents see multiple opportunities
Early adopters of seaweed aquaculture are focusing largely on sugar kelp (Saccharina latissima). That is the nutritious food in sushi, soups, and salads in Asian-inspired cuisine. The white powder that forms on its dried fronds is also used as a sweetener in foods and a thickener in cosmetics.

Research specialist Scott Lindell of Woods Hole Oceanographic updated attendees at the 40th Milford Aquaculture Conference held in Connecticut in January on a selective breeding program to improve sugar kelp’s productivity and composition for this purpose.

Apart from food, manufacturing, and energy applications, sugar kelp improves water quality and provides habitat for fish, especially in their early life stages. In Long Island Sound, scientists from the Maritime Aquarium and the University of Connecticut are working with artisanal operators to document how pelagic animals are using kelp for shelter.

“Kelp helps buffer the water from ocean acidification and that is very important especially in an area like ours with acidic glacier melt,” says Bates, the Alaskan oyster farmer. “Locally I know it helps to grow better oysters and many local organisms depend on our kelp forest for food, shelter and habitat.”

Greg Martino agrees. “By growing something that is actually helping the water, and at the rate that it can grow, it has a very big potential to help with climate change, feed people and provide a number of other byproducts.”

Fresh seaweed is a common sight in Asian markets. North America is well placed to provide the best seaweed because of strict water-quality regulations, says a US seaweed farmer Credit: ©RobertCoy / Adobe Stock

Strides in production expertise
Research funding from NOAA, state institutions, and private foundations is paying off in increased competence in growing kelp.

In Hawaii, tank-cultured Halymenia, ‘sea-grapes’ (Caulerpa) and ‘ogo’ (Gracilaria) are being grown at the experimental algae culture facility at the Natural Energy Laboratory of Hawaii Authority (NELHA). Ocean Era LLC, a research company in Kona and formerly known as Kampachi Farms LLC, is extending its scope of work to include offshore farming of algae for food, feed and biofuels.

On the mainland, engineers from the US Naval Academy and partners have been studying the relationships between waves, currents, the kelp’s biomass, and tension in order to specify the best deep-water mooring system gear. Kelp is usually grown on pre-seeded lines attached to a long rope that is suspended between buoys. What are planted as “very little hair-like” spores that are visible only under a microscope in December grow into seaweed measuring over a foot to two feet in length by April, the Martinos say.

But it can also succeed in shallow water, where many oyster farms are located. That was the encouraging finding of New York’s Stony Brook University when it compared kelp growth and quality between shallow- and deep-water environments. It also gained insight into optimal growing months for different depths.

This is all good news for shellfish farmers who are adding seaweed to their leases. They can grow it, but can they sell it? asks Anoushka Concepcion, an aquaculture extension specialist with Connecticut Sea Grant.

The Martino Brothers are collaborating with local chefs in adding kelp to the menus as well as with other businesses on the island, such as a sea salt company to make kelp seasoning and another farm to make kelp soap.

But those kinds of cottage businesses, also sprouting up along the coast of Maine, only begin to tap the large potential of seaweed as a commercial industry. The framework of the business has to be envisioned at scale.

Help is on the way
To address this concern, Concepcion is spearheading a national program funded by Sea Grant that will bring together a range of stakeholders—including chefs, regulators, processors, and dealers—to address the framework for bringing seaweed to market.

“It’s not commercially viable yet. That’s the next step for farmers,” she says.

She will launch the three-year project with a thorough needs assessment in seaweed-producing states. Working groups will then identify specific plans related to processing, distribution, and new products. “In the next few years, I hope we’ll be seeing viable commercial options,” she says.

The project is also funding the online “Seaweed Hub,” which promises to keep everyone informed of progress. Stay tuned.