Minister of Fisheries and Aquaculture for Nova Scotia Steve Craig lays out his vision for making aquaculture a part of the solution for rebuilding the province’s economy. Appointed to this portfolio by the province’s newly elected Premier in August 2021, Craig’s mandate includes implementing a licensing process that ‘places much weight  on environmental considerations,’ mapping out the province’s coastal areas – akin to Norway’s traffic-light system – based on their suitability for finfish farming, and engaging with the community regarding open-net pen aquaculture.

Our new government in Nova Scotia supports low-impact/ high-value, sustainable aquaculture. While we are new in office, aquaculture in Nova Scotia has a long history; it’s been here since confederation when Canada’s oldest oyster farm began producing American oysters here, in the community of Malagash in 1867. The industry in our province has been growing incrementally over the decades, and today is valued at $90 million, employing more than 800 people, with high paying jobs in rural Nova Scotia. Aquaculture is a key economic driver in coastal communities across the province, and, as the new minister responsible, I am keen to see more coastal communities learning more about aquaculture’s benefits and embracing the positive future it holds for our rural economy.

It is a future First Nations are actively embracing in Nova Scotia. In fact, six of the 13 band councils in the province are engaged in aquaculture, and We’koqma’q First Nations in beautiful Cape Breton is the largest producer of farmed trout in eastern Canada.

We see aquaculture as an exciting industry that can be grown and expanded in our province, responsibly and sustainably, offering great opportunities.  Our government, through the diligent efforts of our department, will work to build public confidence and community acceptance through better communication and education.

I’ll be asking our department to ensure the province’s Aquaculture Expansion Plan has a strong strategy in place to make the public aware of the potential of a sustainable aquaculture industry. This is a critical part of our plans for the future. It is through honest dialogue and public-facing regulatory processes that we intend to create the foundation for greater public trust.

This is important given that aquaculture is the fastest growing segment of food production in the world today, with over 50 percent of all seafood consumed being farmed. Simply put, there are not enough fish in the ocean to feed a growing population.  Sustainable aquaculture is not a want, it is a necessity. We recognize aquaculture’s importance to food security and see a future where Nova Scotia is a leading destination for sustainable aquaculture investment. 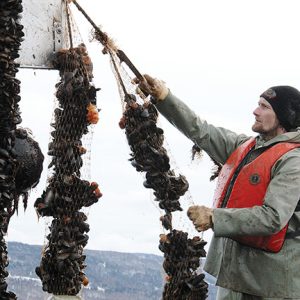 We understand that the other critical keys to growing this industry well are effective regulations, legislation, and science-based decision making.

In 2015, an independent study of the industry in Nova Scotia, the Doelle-Lahey Report, recommended some important regulatory changes. Looking forward, we will be reviewing the report and ensuring that the right reforms are in place to support key recommendations that are still relevant and will support a framework to build a sustainable industry.

The Doelle-Lahey Report concluded that “through incremental development and continuous improvement to minimize negative impacts and risks while maximizing benefits, marine-based fin-fish aquaculture has the potential to make an important contribution to sustainable prosperity in Nova Scotia.”

We agree. Our government will set out to achieve that development and continuous improvement by encouraging greater community trust, working closely with First Nations, and ensuring a proper regulatory regime is in place that promotes responsible aquaculture expansion. Our industry partners recognize the importance of an effective regulatory framework for sustainable growth. And we recognize the importance of sustainable aquaculture as a key part of Nova Scotia’s future food security and rural prosperity.

Nova Scotia’s long coastline, clean water, and well-established marine infrastructure make it well suited for continued sustainable development. We welcome new projects that meet this vision. There may be challenges, yes, but we are confident they can be remedied through honest dialogue, cooperation, innovation, and decisions based on science. Looking ahead, using these tools, we intend to help build a foundation for the industry’s future in our province that is not just sustainably prosperous but also a tribute to the legacy of aquaculture’s historic start in Nova Scotia, a century and a half ago.