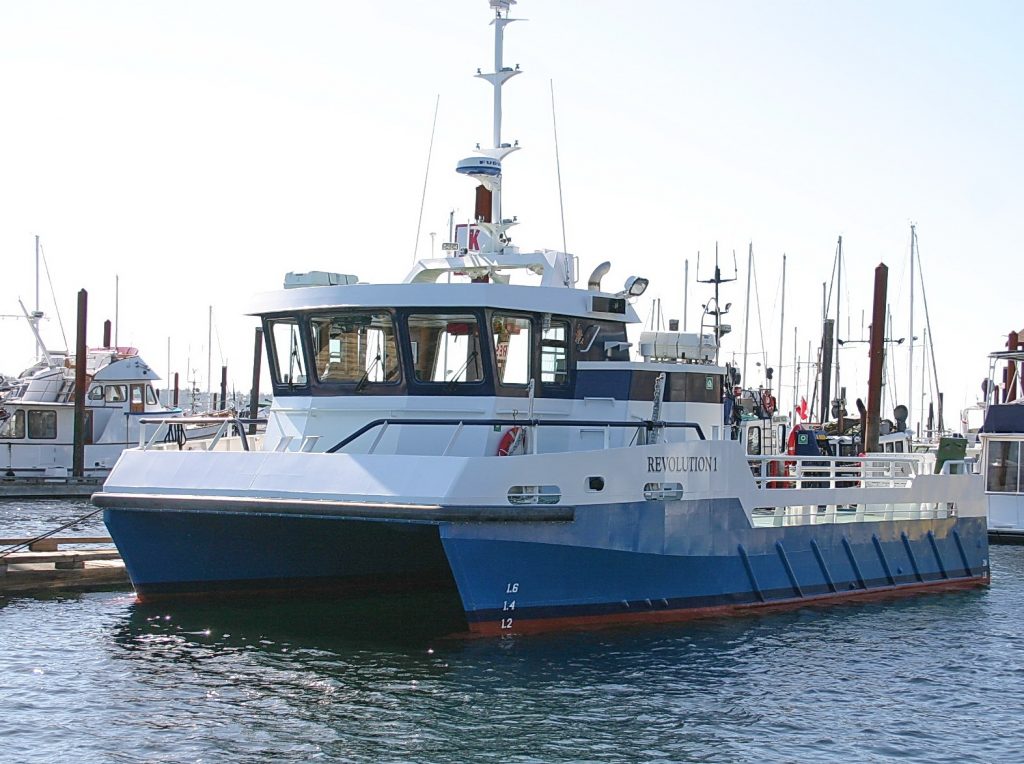 The catamaran hull form with its 23-ft beam provides great stability for pulling heavy loads over the sides and stern of the vessel with the Palfinger PK 23500M hydraulic crane and telescoping boom. It’s rated for 23.5 mt maximum load and is located well aft to allow room for stowing a 20-ft container on deck.  New catamaran fish-farm tender for Marine Harvest Canada gets to work in Queen Charlotte Strait.

In June the Revolution I, a catamaran fish-farm tender, was delivered by the Bracewell Marine Group (Richmond BC) to Marine Harvest Canada (MHC). The cat headed immediately north to MHC’s Port Hardy BC base of operations where it began servicing their seven Atlantic salmon farm-sites in Queen Charlotte Strait waters.

Measuring 44′ loa x 23′ x 7.3′ (depth to deck) and 19.7 grt the Revolution I is the VS 813XL ‘multi-purpose cat’ design from Wartsila Ship Design (Fitzar, Norway) with some modifications for its use in BC waters.  As the workhorses of the Norwegian fishfarming industry the catamaran designs are well proven and there are 200-plus from the various stages of cat evolution working in that industry. The cat hull form provides a stable platform for operations in exposed locations, a large deck area with high deck-load capacity and high maneuverability.

On the Revolution I the hull and deck are 4.8 mm steel and the deckhouse is aluminum. From the water-line up Brace well Marine used the marine metallizing technology to apply a corrosion-resistant zinc barrier coating to the hull steel (aluminum and ceramic oxide were applied to the decks for a non-skid surface). All surfaces were then sealed with epoxy primers and topcoats.

Propulsion for the Revolution I is twin 330-hp John Deere 6081 AFM75 mechanical-control diesels (supplied by Frontier Power Products, Delta BC) with Twin Disc 5065SC marine gears which turn 32″ x 23″ four blade NiBrAl propellers on three-inch 316L stainless steel shafts. The twin screws and two 25-hp bowthrusters combine to provide high maneuverability. The propellers are in shallow hull tunnels and have fore and aft ring guards for protection when operating among the lines of anchor systems.  Service speed is 10 knots.

In Europe the catamaran tenders are built to the Nordic Boat Standard for workboats under 15 meters in length. In BC the Revolution I had to be constructed to Transport Canada standards and is classified as a fully-inspected fishing vessel over 15 gross tonnes.  Its certification is Near Coastal II, Limited Home Trade III.

Bracewell Marine had drawings and scantlings prepared by Det Norsk Veritas (Vancouver BC) and they were submitted to Transport Canada for approval. Marine Harvest Canada had received the go-ahead from head office in Norway to build the catamaran in 2011. However, the plan approval process delayed the start of construction until late April 2013.

Revolution I may have taken a longer than anticipated to arrive at its Port Hardy base of operations but as the cat went to work at the end of June, Production Manager Darren Ingersoll, who was also the owner’s representative through the construction of the vessel, reported, “There are the usual tweeks to be done but overall we are very happy with Revolution I.”

On its way north to its Port Hardy BC base of operations the Revolution I was briefly alongside in Campbell River BC. Marine Harvest Canada staff were able to tour the cat and enjoy a BBQ aboard.

The catamaran hull form with its 23-ft beam provides great stability for pulling heavy loads over the sides and stern of the vessel with the Palfinger PK 23500M hydraulic crane and telescoping boom. It’s rated for 23.5 mt maximum load and is located well aft to allow room for stowing a 20-ft container on deck.  The crane’s primary use is for pulling nets aboard for transport to Port Hardy for washing. There is a console with manual controls at the stern next to the crane and a wireless portable control enables the operator to observe lifts directly for increased  operational safety. Located on the starboard side are two Keypower Equipment hydraulic capstans – one rated at three tonnes at a starboard midships position and a 1.5-tonne located aft, both controlled from a midships control console with clear sight-lines aft and alongside. They are primarily used for rigging lines and setting/retrieving anchors for the net pens. The midships station also duplicates the engine, steering and bowthruster controls of the main helm station.

The pilothouse is fitted with Twin Disc EC 300 electronic engine and gear controls, Kobelt Manufacturing steering controls, Furuno navigation electronics and Keypower Equipment controls for the port and starboard bowthrusters. Electric 110-volt appliances include a microwave, fridge and coffee-maker plus there is an electric cabin heater and two bus heaters each running off a main engine.

The port engine room houses a Kubota 11-kW genset and the electrical distribution panels. In the starboard engine room the Keypower hydraulic system for the crane, bowthrusters, capstans, fire pump and pressure-washer pump are run off the starboard main engine and gear.

On board Revolution I, left to right: Scott Moult, Darren Ingersoll, Blake Creelman. Moult and Creelman are MHC’s co-captains on the new vessel and will operate with one or two deckhands. Ingersoll is MHC’s production manager for their Port Hardy production area. To their right is the companionway access to a below-decks space with work-bench, head, the hot-water heater and holding tank. The liferaft above the access is deployed over the port side via a hinged ramp.