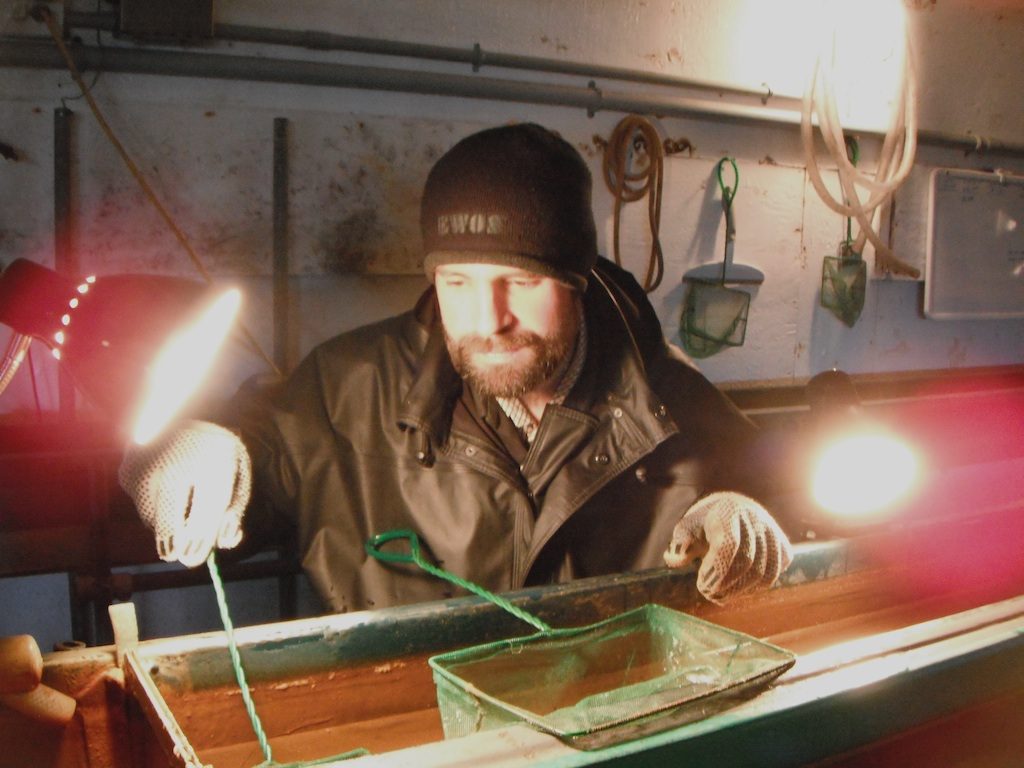 For eight long Manitoba winters, cousins Mark and Peter Waldner have endured the conditions while working diligently to build Ridgeland Aqua Farms into the sustainable Arctic charr farm it is today.

In just eight short years, this land-based fish farm has blossomed from neophyte contract grower to fully integrated establishment that spawns, hatches, rears juveniles, grows out and processes about 35 tonnes of Nauyuk strain Arctic charr annually.  Equipped with two separate recirculating aquaculture systems (RAS) and fortified with a Canadian Food Inspection Agency (CFIA) registered processing plant, the operation located on the Ridgeland Hutterite Colony near Anola, Manitoba, Canada, has adapted to the realities of aquaculture on the prairies.  “You see these grey hairs?” joked Peter Waldner. “We went from knowing squat to being able to raise fish.”

People know that agriculture on the prairies is not static. The farming community must be adaptable and willing to embrace change.  Mark and Peter grew up as no strangers to this way of life while contributing to various working aspects of the colony including bees, dairy, chickens and hogs. These experiences allowed the cousins to build skills in electrical, plumbing and animal husbandry, core skills required to succeed later on.

In 2007, Ridgeland Colony further diversified which put the young Waldners at the center of the new fish enterprise.  Mark agreed that past experiences were valuable, “Absolutely.  (Past work) gave us skills for the fish.  If a pump goes out at four in the morning, I don’t have to call someone.  I’m the one in here fixing it.”  Since 2007, Mark and Peter have become highly skilled fish farmers with a collective, in-depth understanding of all mechanical, biological and business processes on the farm.

Capitalizing on the availability of an unused hog barn, Ridgeland installed their first RAS consisting of two parallel raceways constructed using extruded PVC tank walls filled with concrete for strength, plus rotary drum filters, CO2 strippers, low head oxygenators (LHOs) supported by onsite oxygen and ozone generation and fluidized sand beds for biofiltration, were incorporated to support effective water reconditioning.  The system was originally designed to bring 200g fingerlings up to a target weight of three to five pounds under a contract arrangement with the now shuttered Agassiz Aqua Farms.

In 2009 when Agassiz closed, Ridgeland found themselves at a crossroads: sink or swim, evolve or die.  In order to supply the demand, Mark and Peter designed and constructed a processing plant capable of converting market-sized fish to high quality skin-on boneless fillets.  The plant receives whole fish through a pipe connected directly to the fish barn (a novel approach that has proved efficient over the years) prior to bleeding, filleting, removing pin bones and packing the market-ready product.  Taking on fish processing was the first example of Ridgeland Aqua Farms’ successful adaptation of its business model to meet the requirements of the marketplace.

In 2010, on the upstream side of the business, fingerling supply was closing and the decision was made to begin production of new generations of fish that would preserve their ability to service the market in the future.  Confident in their ability to adapt, Mark and Peter installed their second RAS, similar to the original concept except with a series of round tanks and troughs instead of raceways and a moving bed bioreactor built primarily by Ridgeland.

Mark and Peter also began selecting their own broodstock and spawning a little over two years ago.  Earlier this year for the first time, they harvested fish from their own spawn.  In reality, an impressive milestone but the always humble Mark knows that this is just part of the evolution of the farm “It’s just another fish at the end of the day,” chuckled Mark.

Out of necessity, Ridgeland has integrated upstream and downstream activities to their operation and having done so successfully they now feel they are better off, “Absolutely.  It’s calmer.  It’s more work but we like to be involved and understand the whole process,” said Mark.

On top of taking on the large projects, Mark and Peter are continually refining their systems and management to strive for better results.  The first RAS has seen several modifications to improve water quality and overall performance.  Radial flow separators were installed to improve solids removal and decrease labour.  A creative grading system was used in the early days but they have been able to get away from it.  “It was hard on the fish and not the most enjoyable job.  Now we’ve found that the market is allowing a bit more size variation so we don’t use it much,” explained Mark.  Always looking to improve, Ridgeland is planning to replace the sand in their biofilters with plastic biomedia later this year.

Thanks to the adaptability and dedication of Mark and Peter in the face of extraordinary conditions, the sea-fruits of their labour are gaining popularity on the plate.  Like the other members of the salmon and trout family, Arctic charr is versatile and tastes great when baked, barbequed, pan fried or even served as sashimi.  Peter recommends eating it lightly seasoned then baked to enjoy the flavour of the fish but Mark insists that “however they prepare it in the kitchen that day tastes best.“

At a time when consumers are looking to try new healthy, locally sourced products whether at a restaurant or even in their own homes, Ridgeland Aqua Farms is adding a fresh new option.  Mike Green, 4th runner up on MasterChef Canada and resident Manitoban chose Arctic charr for his audition on the show and obviously impressed the judges as he was one of only a few to get all three yeses, “I wanted to celebrate our region.  Plus the fish is just so damn tasty!” Mike

exclaimed.  “Charr skin is like the bacon of the lake!” Mike likes charr so much that he is considering using it at his upcoming food stand Green Canteen, “I am hoping to use the Ridgeland charr this summer in Kenora (Ontario) for the pop ups I’ll be cooking at.”

To diversify their product offering, Ridgeland has been producing test batches of smoked charr as well.  “I know it’s a good product,” said Mark, “we’d like to bring in some experts to get our product just right and to know it’ll meet the standards.”  Mike Green had a chance to sample some of the smoked charr and thought that it was quite nice and a good bit different from salmon, “I think in the near future as more chefs and foodies are looking for the next thing then it could really take off.”

Mark and Peter are establishing themselves as leaders in the freshwater aquaculture industry in Canada.  Peter is an active board member of the Arctic Charr in Canada Improvement Initiative, which aims to improve the prosperity of Arctic charr aquaculture in Canada, and this is yet another example of how Ridgeland Aqua Farms is working to ensure that their operation is constantly evolving with the ever-changing business climate.  Technology integration and continual improvement has provided these innovative farmers with a robust platform on which to carry out their business of sharing a true delicacy.