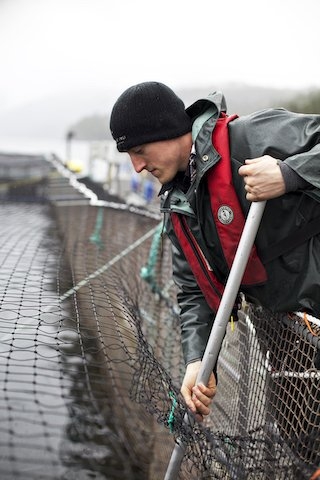 ‘Key indicators of the business are pointing in the right direction

“Our members have no problem selling every fish that they raise and it’s been that way for a few years now. Seafood has always been a volatile market but the global trend seems to point to demand remaining strong for the foreseeable future,” Dunn tells Aquaculture North America (ANA).

British Columbia’s farmed salmon industry contributed $1.5 billion towards the BC economy between 2013 and 2016 and created 1,600 jobs, according to an independent economic analysis of the province’s salmon aquaculture industry.

The increase of 37 percent over the past three years in its value to the province shows the industry is reaping the benefits from unprecedented investment in technology and practices that increase the overall performance of BC salmon farms.

“Overall, 2017 has been a fantastic year for our members. They ran profitable businesses. The fish on farms are very healthy and the environmental performance is sound and strong. The investment in the sector has been unprecedented, $200 million over the last two years, and that’s really helped the services supply sector because those are the companies that are helping to build the industry here in BC. Overall for everyone it was a good year,” says Dunn.

The rise in value of BC’s farmed fish also reflects the record high salmon prices, driven by the imbalance in global supply and demand. Efforts to curtail the biological footprint of salmon farming have led producers to limit production, but there are no plans as of yet to increase production volumes, says Dunn.

“Since 2015 the provincial government has not been reviewing new site applications in BC because they are waiting for recommendations from the Minister of Agriculture’s Advisory Council on Finfish Aquaculture as to whether the industry in BC should grow or not,” says Dunn, who adds that the council’s report is expected by the end of the year.

“We have 52 members, most of them in the service and supply sectors. Only eight grow fish of them; they grow Atlantic, coho, chinook and sablefish as well as steelhead salmon,” says Dunn.

He clearly is proud of the industry’s accomplishments, which includes achieving a “yellow” — or “good alternative” — ranking from Seafood Watch.

“This is important for the reputation of our sector and it is a signal that our members are on the right track in terms of how they have improved their environmental performance over the last number of years. So this is by no means the end of the destination, this is a signal from an important organization that we are on the right track to having the highest performing farms from an environmental perspective in the world,” he says.

He also noted that BC salmon farmers are meeting the Aquaculture Stewardship Council’s (ASC) certification standards “at a rate as fast or faster than anywhere in the world.”

“Over 15 percent of our production is certified to that standard,” Dunn says.

The industry has had its share of controversies, however.

One of them was SeaChoice’s claim that salmon farmers in BC are evaluated by ASC under more relaxed eco-certification standards in order “to accommodate current industry practices.” (See box for ASC’s response.)

Dunn says: “The ASC is an independent organization with an independent audited certification of individual farms. How ASC assesses its certification of the farms is up to the ASC. Our members have invested significantly in human resources, practices and infrastructure in an effort to meet that certification and, from what I am told and what it looks like to me, is that they are meeting it and they are meeting it as fast as or faster than anyone in the world and that’s something that we’re quite proud of.”

The escape of thousands of Atlantic salmon from Cooke Aquaculture’s ocean-based farm in Washington State in August has emboldened critics of salmon farming and amplified calls for a switch to land-based aquaculture.

But Dunn says BC’s salmon farmers currently do not have plans to change their production processes.

“Our members are going to continue along the same path. It might sound boring but it’s a long journey working towards environmental performance and fish health is something that our members take as top priority every year. They will continue in that vein to achieve that,” he says

Related
Seafood watchdogs disagree on BC farmed-salmon’s enhanced rating
BC reaps benefits of investments in farmed salmon industry
Consumer awareness a priority for new head of BC Salmon Farmers Association
FN chief to BC salmon farmers: I want to assure my people that I’ve got their best interest
Women
More Women Stories
Editor’s Picks