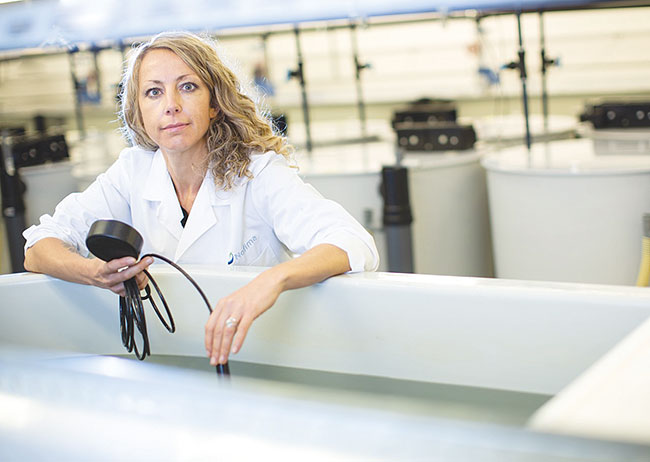 With the south-coast beaches and coves of Newfoundland caked in salmon fat last October, it became easier for everyone—scientist, salmon farmer, and citizen—to imagine the unimaginable impact of climate change, which will only get worse, according to the lead researcher of a new study.

“The industry is now waking up to climate change. It hasn’t been that much of a focus until now,” says Dr Elisabeth Ytteborg, researcher at Nofima, a Norwegian research institute specializing in fisheries, aquaculture, and food.

The crisis at Northern Harvest, purchased by Mowi last year, sharpened attention when 2.6 million salmon died as a result of low oxygen. The “temperature event,” as Mowi officials called it, occurred after 11 to 13 days of temperatures in the range of 17 to 21C throughout the water column. Seeking relief, salmon retreated deeper into the net pens in Fortune Bay, crowding together and depleting their oxygen supply.

Norwegian findings
Now, a new study led by Ytteborg, with cooperation from the University of Stirling and leading salmon companies in Norway, is shedding light on what a mitigation agenda for such ocean warming might look like. It encompasses not only research knowledge gaps but also farm management protocols, although it’s not as easy as ticking off the boxes.

“There are a lot of challenges in climate change with regard to aquaculture, and among the problems are the unknowns. We don’t know all of the things that we should look for,” says Ytteborg.

Nofima scientists began working on this issue three-and-a-half years ago, as part of the EU-funded project ClimeFish. Their hypothesis was that the temperature projections in global models might not tell an accurate story about what could happen in the bays and coves where salmon farms are sited. They were right.

In fact, examining temperature data from 52 sites in 13 regions between 2007-2017, they found that daily average farm measurements differed frequently from the average daily modelled temperatures—by up to six degrees.

“If coarse resolution climate model temperatures were used directly, then the impacts on salmon culture could be severely over- or underestimated,” resulting in serious biological and economic implications, the study concluded.

Researchers took an important next step and recalibrated the climate projections to farm level, which they provided to study participants. Findings were presented at Aquaculture Europe 2019 last October.

“The challenges in the future will probably be much worse than what we saw in this project. This is more to exemplify the importance of looking at temperature data at the local scale. If you want to adapt to climate change, this is the level we must examine,” Ytteborg says.

Breeding resilient fish
In Australia, salmon farmers in Tasmania and researchers at national science research agency CSIRO have collaborated in a selective breeding program to produce a more resilient fish.

The waters in the island state of Tasmania are among the warmest in the world for salmon culture. They have warmed by 2ºC in the past 60 years and will warm by another 3ºC in the next 50.

In 2009, roughly five years since the program started, the first commercial production from select salmon broodstock commenced. Providing Australian farmers with salmon families with those traits equates to production efficiencies worth millions of dollars each year, says CSIRO.

The agency adds: “CSIRO’s research has the potential to help global salmon production as AGD is now emerging as a significant health issue in commercial salmon populations in Scotland, Ireland and Norway as seawater temperatures increase.”

In another program called “sentinel testing,” Hendrix Genetics is ranking the performance of salmon families in local waters from Scotland to Chile. “You see a really big difference in the optimal families for each environment,” says Dr Robbert Blonk, R&D Director, Aquaculture.

But, thinking about the massive loss in Canada, he adds, “20ºC is quite extreme for salmon. It is far from optimal.” And the main issue there was the fluctuation in temperature. “It will take some time before we are able to breed an animal that is able to perform 100 percent in this kind of highly changing environment. Genetics definitely has a role in this, but there’s also management and nutrition.” 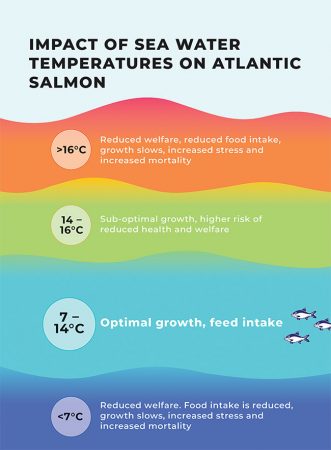 Excerpt from scientific poster illustrates temperature ranges under which growth of Atlantic salmon was modelled in a recent Nofima study Data: ClimeFish/Nofima

Farm-specific initiatives
The diversity of farming sites makes it difficult to generalize adaption strategies. It all boils down to knowing your site, says David Kiemele, managing director of Cermaq Canada, who advocates “precision aquaculture.” Farm-specific environmental monitoring, as well as enhanced monitoring of fish health, are both vital.

An initiative at Grieg Seafood in BC is addressing a core problem of climate-change mitigation. There’s “huge gaps in data,” according to Dean Trethewey, seawater production director. Since 2015, sensors in all net pens and on barges have been automatically uploading data into the Cloud 24/7, amassing 2.2 million data points each year to compare to historical metrics. Manual measurements of temperatures at different depths are also captured, as well as data from the Harmful Algae Monitoring Program (HAMP).

Trethewey’s team is now mining the data, which has yielded discoveries about the cyclical presence of plankton and oxygen level swings during tidal changes. These insights inform the actions they take. “Accurate data drives sustainable decisions” has become a mantra.

Cermaq’s Kiemele spent 11 years growing salmon in Tasmania, where surface waters have warmed 2C over the past 60 years—two to three times the global rate, according to government data. “So, I know what warm water is,” he says.

“There are always ways to help our animals through difficulties and environmental challenges,” he continues, whether threats emanate from temperature, algal blooms, storms, or oxygen levels. “There are proper ways to move through the site selection process and complement your sites with the right production schedules for that site.”

Deeper nets, oxygenation systems, changes in stocking strategy, and use of different feeds may all play a role. If a farm anticipates warmings, Ytteborg adds, it might avoid stressors, such as treating or handling the fish, so that they are more robust to endure challenges.

More study needed
Most studies up to this point have focused on finding the temperature and feeding regimes for optimal growth, Ytteborg points out. But more work must be done now, combining the effects of temperature with other environmental factors (low oxygen, salinity, and reduced pH) and fish stressors, including disease. “That’s one of the major knowledge gaps, as I see it,” she says. “We need more research. This is aquaculture for food production, and it will be very important in the future.”

— With files from Liza Mayer