Salmon made in the lab evokes mixed reactions

Alternatives to wild and farmed fish may have their own problems 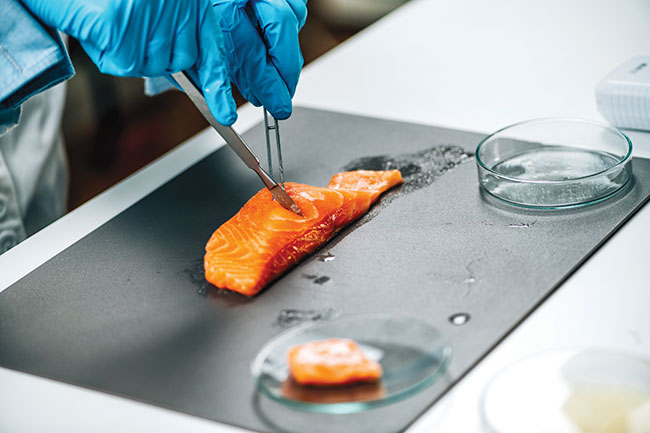 Wildtype, a San Francisco-based startup, has big plans: to save the dwindling salmon population while enabling Americans to continue to enjoy their favorite salmon or sushi dish.

“We have the opportunity to create seafood that has all the things we love and eliminate things that we don’t love,” said Ben Friedman, head of product at Wildtype.

Friedman is talking about “fish-less” fish proteins made in the laboratory, a process known as “cellular aquaculture” because the proteins are made directly from fish cells.

“There are three core reasons why we started Wildtype,” he says. “The first is environmentally: the wild salmon population is declining. The second reason is aquaculture: there are many challenges, such as its dependence on wild fish (as feed material), and we hope to alleviate some of them. The third reason is removing the many containments among our wild fish population and to stop using the ocean as dumping ground.”

Freidman explained that the salmon cells were collected three years ago from a small fish. (The taste was very subtle.)

“We’re particularly proud of how our product performs in sushi applications like rolls and nigiri, where Wildtype salmon is front and center on the plate,” he said.  (Nigiri means “to grasp,” and references the way the rice is pressed into shape by hand.)

“We make salmon with a clean ocean flavor that people love. Our society tells us the fresher the better. Most questions involves about how we make it. Most caught salmon has been out of the water for a long time. Besides, we don’t need to send lab-based salmon to a processor to cut. Cultivated salmon takes between four to six weeks to produce as compared to three years for farmed salmon.”

Wildtype considers cell-based salmon to be environmentally better than caught salmon. For example, industrial trawling accounts for more carbon emissions than the airline industry. “The nutritional value is nearly the same, and in many ways better than wild-caught or farmed salmon because it does not contain the heavy metals, microplastics, or antibiotics found in most salmon at the grocery store,” claims Wildtype co-founder and CEO Justin Kolbeck. “The product has slightly less protein than alternatives but a very similar fat composition, including levels of healthy Omega-3 fatty acids.”

“It is true that overfishing is a huge problem in many places around the globe,” she said. “However, Alaska proactively maintains some of the world’s best sustainably managed fisheries. Our wild fisheries are heavily regulated by the state. That basically means fishermen and women are permitted to fish only when there is enough fish to sustain the wild populations.”

“Justin (Kolbeck) and I founded Wildtype in 2016 and started to build a team in 2018,”  Elfenbein said. “The salmon can stand on its own and does not hide behind sauce or dumped in a deep fryer. We want to be as transparent as possible because we want people to know how it (the lab-created salmon) is made; that is the key to opening up this market.”

Questions raised
In the lead up to COP26 held in Glasgow in November, Chris Elliot, a professor of food safety at Queen’s University Belfast expressed his doubts as to whether artificial fish or meats are the answer to achieving a healthier planet and population. 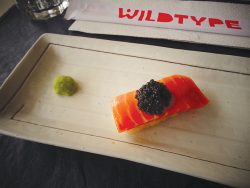 Without much information available about the nutrition content and how they compare in sustainability to their livestock-based equivalents, Elliot wrote in New Food Magazine that he is “far from convinced” that plant- or cell-based foods are the answer to climate change.

Indeed, among the questions raised by Eric Muraille, a biologist at the Université Libre de Bruxelles in Belgium, is the environmental cost of sterilizing the stainless-steel culture tanks in order to ward off bacterial contamination of the cell cultures.  He compared the labs where cell cultures are carried out to highly controlled and sanitized “clean rooms” in the pharmaceutical industry.

In an article titled: “‘Cultured’ meat could create more problems than it solves” published in The Conversation in November 2019, Muraille wrote:

“Animals have an immune system that naturally protects them against bacterial and other infections. This is not the case for cell culture, and in a nutrient-rich environment, bacteria multiply much faster than animal cells. To avoid producing a steak made up of more bacteria than meat, it is essential to avoid contamination, and that requires a high level of sterility.”

As such, the pharmaceutical industry’s carbon footprint may be 55 percent higher than that of the automotive industry, wrote Muraille, citing data available at that time.

Kolbeck has acknowledged the need for a Life Cycle Analysis to measure the environmental impact of their product in order to give consumers a factual analysis of their sustainability.

“If we’re going to say that we are a cleaner and a more sustainable option, we better do a Life Cycle Analysis and show those data and be transparent about that. Because, otherwise, what are we talking about?” he said earlier (see ANA Jul/Aug 2021, p33).

A factual analysis of their nutritional value should also be disclosed.

The term “cultured salmon” has also raised some questions. Aquaculture North America surveyed 36 members of a San Francisco fitness studio whether they would taste or order salmon made in a lab.  The responses were mixed: 15 said “No;” 13 said “Yes” and 8 responded “Maybe.”

The studio’s manager, Margaret Lovallo, said many members were very interested and needed a definition of “cultured salmon.” She described it as similar to “Beyond Beef,” which is grown in a lab, but the members were unsure if the salmon is technically vegetarian.

“I wouldn’t put GMOs or anything in my body that was made in a lab,” said one of the survey respondents, Rob, a trainer at the gym.

However, Andrew, a tall trainer on a stationary bike was more welcoming. “I would definitely eat cultured salmon. It will be a real taste adventure.”

And what about the price point?

“This past year we’ve dramatically reduced the cost of our product and the opening of our new pilot plant has allowed us to continue to reduce production costs,” said co-founder Elfenbein. “We anticipate by the time we go to market our price point will be comparable to other sushi-grade salmon.”

Wildtype is building a new value chain from the ground-up. It will be bringing on additional launch partners as it continues to expand production capacity in the United States and abroad.

As with the entire industry, Wildtype has faced challenges with some raw materials, including the stainless steel for the production tanks. These shortages are directly linked to COVID-related supply chain disruptions, and the company continues to work to source the needed materials.

On the heels of the launch of its demonstration facility in San Francisco, Wildtype expects to complete a tasting room – “The Dock” – this year. The site will enable visitors to sample Wildtype salmon, and learn how it is made.

Wildtype is currently developing a restaurant partner program so that once the consultation with the US Food and Drug Administration (FDA) is completed customers will be able to taste Wildtype salmon at the participating restaurants.

“Wildtype is not yet available to the public as we are still in consultation with the US FDA; but we’re getting closer,” said Kolbeck. “If pre-market interest is any indicator, we think consumers are going to be very excited when we launch our products. We’ve started with Coho salmon and consumers who like Coho salmon will love Wildtype.”

With files from Liza Mayer