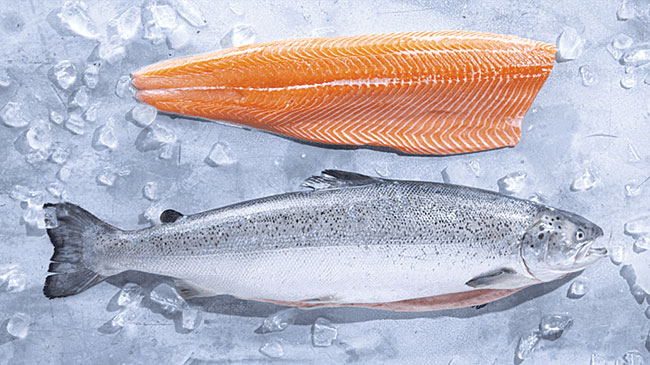 Salmon fed a diet that relies less on forage fish are increasing their market presence in North America and Europe Credit: Kvarøy Arctic

What was once just a concept is now a product seen in a growing number of stores: salmon nourished by algae-derived feed.

Consumers in the US, Canada, Germany and France have gained access to the product over the past year. The fish have either been raised on BioMar feed that incorporates AlgaPrime DHA, an algae-based source of long-chain Omega-3s from Dutch biotech company Corbion, or on Skretting feed that incorporates Veramaris algal oil.

French supermarket Supermarché Match, which last year introduced Veramaris algal-fed salmon in its stores, reported a 12-percent growth in the salmon category since the launch. The success prompted the retailer to introduce in March trout fed with a specially formulated feed from Skretting that also incorporates the algal oil.

Jill Kauffman Johnson, head of Global Market Development-Algae Ingredients at Corbion noted that many of the feed companies in Norway have been eager to test and incorporate novel ingredients. “Norwegian research institutes including Nofima have affirmed that higher levels of Omega-3s improve fish health and that there is no difference whether Omega-3s come from microalgae or fish oil,” she said.