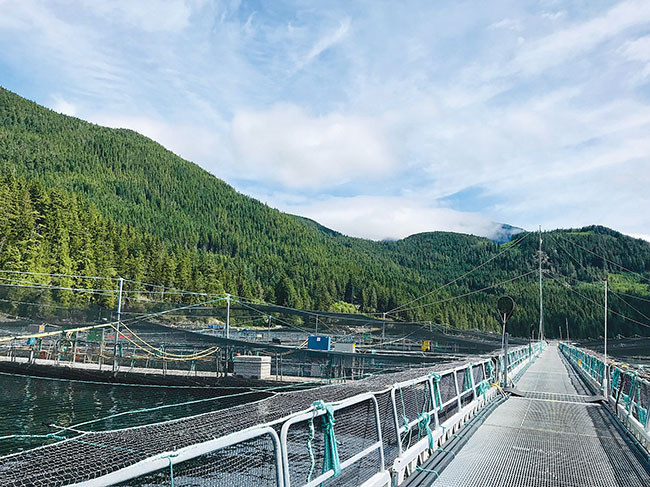 The future of 18 farms in BC whose licenses are up for renewal was still uncertain as of press time Photo: Liza Mayer

Risk assessments of nine salmon pathogens were conducted to help decide the fate of 18 salmon farms in the area, whose licenses are up for renewal this December.

Critics have blamed the farmed salmon industry for the decline in the population of wild salmon in the Fraser River in BC. In 2009, Canada established a commission to address those concerns.

One of the recommendations of that commission is to abolish the 18 farms in the Discovery Islands by September 2020 unless there is proof they pose only a “minimum risk of serious harm to the heath of migrating Fraser River salmon.”

The latest findings echo a 2015 document entitled “Information Regarding Concerns about Farmed Salmon – Wild Salmon Interactions” that provincial fish pathologist Dr Gary Marty presented to the BC Provincial Government. In that document, Marty said BC farmed Atlantic salmon “pose no more than a minimal risk of serious harm to the health of migrating wild salmon.” He also said that less than one percent of Atlantic salmon die of diseases that might be infectious to wild Pacific salmon.

DFO’s findings and Marty’s 2015 statements are both consistent with the findings of the Cohen Commission into the decline of Fraser River sockeye salmon released in 2012: “Data presented during this Inquiry did not show that salmon farms were having a significant negative impact on Fraser River sockeye.”

But the question as to why wild salmon populations in the Fraser River are fluctuating remains a complex issue. Following the release of the Discovery Islands findings, DFO Minister Bernadette Jordan acknowledged that there are a number of things, for instance climate change, that are impacting the wild Pacific salmon stock. “There is no one silver bullet that’s going to deal with the challenges that we’re seeing,” she said.

DFO and seven First Nations communities whose territories border the area where the farms are located were discussing the future of the 18 fish farms as of press time.