Discuss its potential for sustainable aquaculture 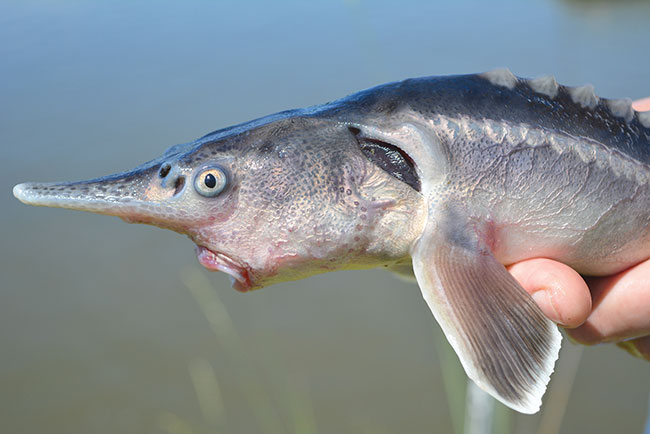 Nicknamed ‘sturddlefish,’ the new hybrid is a combination of American paddlefish and Russian sturgeon Photo: Florian Toth via The New York Times

A new fish hybrid accidentally bred in a Hungarian lab made the news this past summer and the Internet quickly nicknamed it “sturddlefish” because it is a cross between an American paddlefish and a Russian sturgeon.

While it may be tempting to explore its commercial prospects, the researchers that inadvertently created the hybrid say its aquaculture potential is still a subject for debate.

But suppose the sturddlefish inherited the paddlefish parent’s planktivorous feeding habit, “the new hybrid can play an important role in adapting pond aquaculture to the challenges of climate change,” the researchers said.

“Non-fed species have a lower carbon footprint than fed ones, and the co-culture of a filter feeder with relatively high market value as a supplementary species would strengthen pond aquaculture both from an ecological and environmental perspective.”

But it’s too early in the game, as noted earlier.

How could this species have been bred by chance anyway?

According to the paper published in the journal Genes, the original intention of the researchers from Hungary’s National Agricultural Research and Innovation Centre and Research Institute for Fisheries and Aquaculture, was to apply gynogenesis. This is a system of asexual reproduction where, in this case, only the sperm of the American paddlefish is required – but not its DNA – to fertilize the egg of the Russian sturgeon.

To their surprise, the eggs produced fish. The researcher said this was the first successful hybridization between these two species.

This is not the first sturgeon hybrid, however. Sturgeon hybrids are commonly used in aquaculture to exploit the advantages of the superior qualities of the individuals being crossbred. In fact, another study estimated that hybrids account for approximately 35 percent of global sturgeon meat and 20 percent of caviar production.