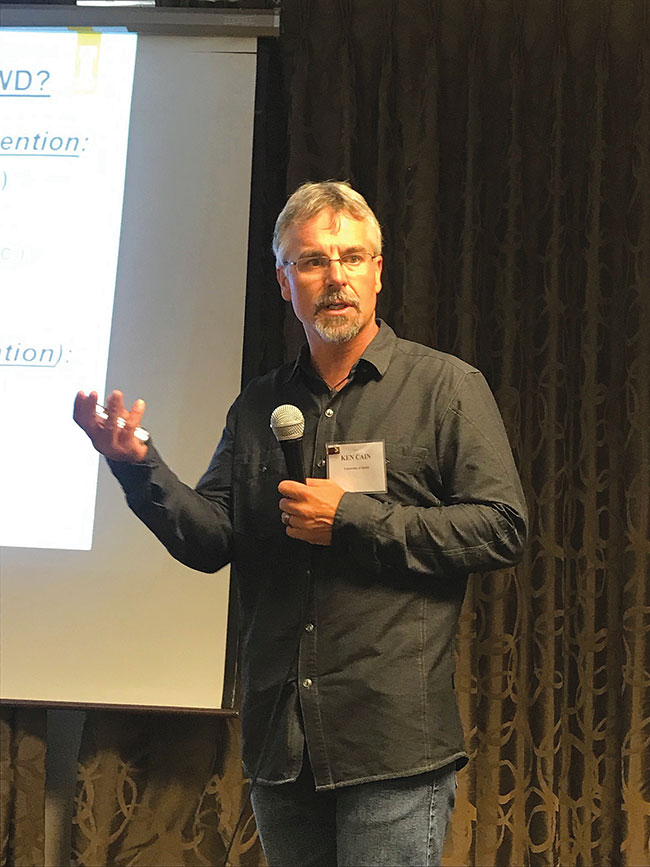 Dr Ken Cain of the University of Idaho says an enhanced version of the coldwater vaccine that awaits USDA approval has also shown efficacy against emerging and novel bacterial strains of Flavobacteria Photo: Liza Mayer

In May, researchers from the University of Idaho and Michigan State University have released encouraging findings about the effectiveness of an immersion vaccine to protect salmonids against emerging and novel strains in the family of Flavobacteria.

Trout farmers recognize these bacteria as the ones that cause bacterial coldwater disease (also known as rainbow trout fry syndrome), bacterial gill disease, and columnaris — all “notoriously difficult to prevent and control despite nearly 100 years of research,” according to one of the paper’s authors.

A recent insight, however, is that this family (notably including Flavobacterium and Chryseobacterium genera) contains hundreds of species, which all have a very similar appearance when cultured in the lab. Without DNA sequencing, diagnosis of the precise bacterium just isn’t definitive. That could lead to wrong assumptions, even faulty treatments.

To address that issue, teams working with Dr Thomas Loch and Dr Mohamed Faisal at Michigan State University have been tapping advances in molecular biology and biotechnology to isolate different species and determine their prevalence.

Dr Kenneth Cain of the University of Idaho wanted to find out if the vaccine developed in his lab for coldwater disease could be utilized against some of these emerging and novel species. This was a particularly important question since such cases have been increasing.

In 2010, Cain and his colleagues had successfully developed a “live attenuated” version of the Flavobacterium — one that is less virulent, but still alive. Such bacteria can grow and produce immunity. The University of Idaho patented the vaccine. Since then, an enhanced version has been developed and awaits its own patent, as well as approval by the US Department of Agriculture.

In the meantime, tests of its efficacy have continued. The enhanced version of the vaccine was used in the study, published in the Journal of Fish Diseases, to examine how it would perform against emerging and novel species isolated from the Great Lakes Region.

Juvenile rainbow trout were vaccinated and developed antibodies associated with bacterial coldwater disease. They were then challenged in four ways: with two Chryseobacterium isolates, a Flavobacterium isolate, a combination of the three, and a “standard virulent” strain. Control groups of fish, which were not vaccinated, were infected in the same manner.

However, protection did not occur with each of the three isolates alone. It should be noted that in the controls of the individual isolates, the mortality was really low. “In combination they represent a greater threat, and it was good news that the immersion vaccine worked in that case,” says Cain.

The takeaway, he emphasizes, is that the tool developed to prevent coldwater disease may bring some additional advantages. “If every once in a while, a farmer has an outbreak that is caused by one of these emerging and novel bacterial strains and not completely related to the strain that causes coldwater disease, then this vaccine could provide benefit in that context as well.”

For a new and related project, the University of Idaho team, in collaboration with researchers at UC Davis, is now collecting and characterizing similar Flavobacterial isolates from facilities throughout California, Washington State, Oregon, Idaho, Utah, and Colorado where there have been disease outbreaks. Will the vaccine help with those, too? The work goes on.