For some, change is hard and costly 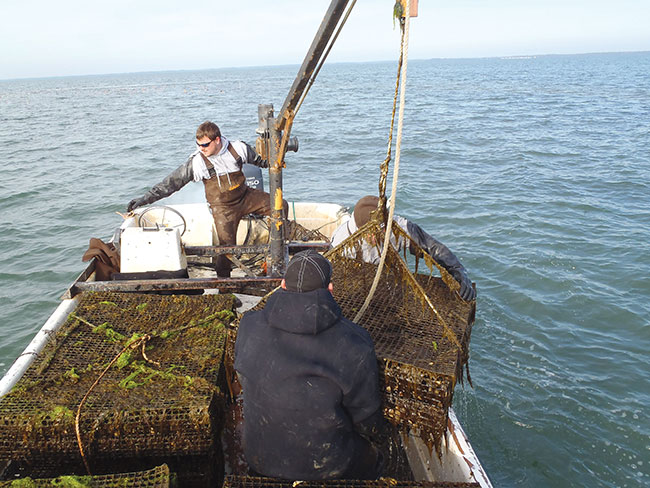 Shellfish farmers like to joke about the slow pace of change in their industry.

Wec Terry, whose grandfather started the family clam and oyster business HM Terry Co on the Chesapeake Bay in 1903, quips: “We live in Willis Wharf, Virginia – over 200 years old, unmarred by progress.”

But dig deeper, and both veterans and newcomers express excitement about advances in farming technologies that range from lighter-weight gear to artificial intelligence. And while some still joke that a farmer’s success relies on “a strong back and a weak mind,” they are increasingly open to innovation.

Whether spurred by new regulations, a drive for profits, or the plain old desire to make hard work easier, change is in the salt air.

Gear
“We have seen rapid development of new gear, much of it solid improvements on old designs,” says Bob Rheault, executive director of the East Coast Shellfish Growers Association.

He points to floating gear like the OysterGro cage, introduced in 2003.  Its system of bags that slide into a floating cage structure added “a second layer of protection of oysters,” he says. “Growers are reporting survival rates of 80 to 90 percent as opposed to 40 to 60 percent for bottom cages.”

Adjustable longline gear like the SEAPA baskets and Hexcyl cages gave farmers more control because they could raise and lower the line depending on the season, weather, or stage of growth.  New Zealand’s Flipfarm has addressed problems with gear loss and fouling with an innovative semi-automated system in which a mini-barge turns cages hanging along tracks.

“Each of these has the potential to be a game changer in certain environments,” Rheault says. “We would benefit from controlled side-by-side studies in various environments so growers can find out what works best under which conditions.”

Farm management
In 2012, Ted Cooney joined the watermen farming the Chesapeake when he started Madhouse Oysters on a 35-acre lease.  He describes the backbreaking work as “like growing rocks for a living.”  To lighten the load, he soon found himself analyzing gear and revamping processes. “My brain works in engineering ways,” he says.

Cooney took the plunge from Excel spreadsheets to white boards to farm management software quickly, too. When Maine-based entrepreneur Chip Terry demonstrated how a new platform was “like a second brain” to manage tasks from cleaning to tumbling, Madhouse Oysters became one of the first customers of Oyster Tracker.  The program also helped Cooney analyze productivity. “I can even look at it from home,” he adds.

Shore-side infrastructure
Cooney has also partnered with the Maryland Industrial Partnerships (MIPS) and the Maryland Department of Natural Resources to address another challenge for the shellfish industry: diminishing space for an increasing level of shore-side equipment.

To meet regulatory requirements, producers, both large and small, must move significant amounts of ice out onto the water and then land product.  These operations require heavier equipment and more gear. As view-loving retirees and recreational boaters buy up coastal real estate, space for such industrial shore-side infrastructure has declined.

Cooney’s idea, for which he has received three grants, is to create a transportable vessel outfitted with novel equipment that will eliminate the need for land-based operations.  Basket-washing and refrigeration systems will be onboard the vessel.

The project, which allows Cooney to tap engineering expertise within the University System of Maryland, envisions a scalable system that works for a one- or two-person farm up to large, multi-vessel operations.

Cold chain
HM Terry Co produces 75 million Sewansecott-branded clams and oysters annually, Wec Terry estimates. “We’ve gone from wheelbarrows and shovels to conveyors and digital counters,” he says. “I’m sure my grandfather would be amazed at how we’ve progressed.”

He attributes the industry’s growth to consumers – “those courageous people who want to try the multiple flavors and textures of oysters grown throughout the world.”  Utmost in his mind is food safety and “a traceable trail from the time that oyster came out of the water to when it went into somebody’s stomach.”

The shellfish industry has made significant investments in better infrastructure and technology to manage the cold chain.   For example, Terry points to the ability to monitor temperature continuously with a system of remote wireless sensors that digitally log temperature data during storage and transportation.

“We use these recording devices on a regular basis on trucks and airplanes so that if there’s a glitch in the temperature somewhere, the system will tell you exactly when and where this happened,” he says. “Our name is out there, and it follows that product all the way to the customer.”

HM Terry is also taking advantage of blast-freezing technology for its line of frozen clams, sold at Whole Foods, among other retailers. The technique offers both taste and safety benefits. 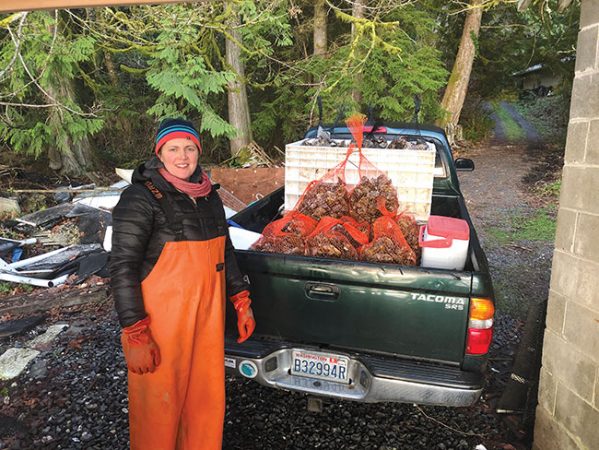 Crop monitoring
Some 200 miles north of H M Terry, on the western side of the Chesapeake, sits the Maryland Robotics Center, where an interdisciplinary team of scientists at the University of Maryland is working on an underwater drone that will collect data on oyster crops. Last summer, the project received a $10-million grant from the US Department of Agriculture.

It will give oyster farmers a new kind of visibility into crop status and growth.  In addition to helping project harvest windows, the drone can look for pests, like shell-boring worms or algal communities.  Plus, this smart technology is friendlier toward the environment than breaking up reefs, a technique that is also labor- and time-intensive.

Roughly the size of a suitcase, the off-the-shelf drone has been enhanced with optics and sensors. The drone uses machine learning in identifying oysters, according to researcher Matthew Gray, an ecophysiologist. Only a few months into the project, the team is already working on the artificial intelligence.

The technology could be costly. To overcome cost barriers, Gray sees creative approaches, such as rental or pooling of resources by a cooperative. With COVID-19 in the back of everyone’s mind, he adds, “We think an industry that is technologically fit will be more resilient to those kinds of disruptions in the future.”

Change is hard
Still, shellfish operations have a long way to go to take advantage of what’s available, with many pitfalls along the way.  For some farms today, simple survival is the priority until COVID-19 passes.

“Changing gear types is a huge challenge and a very expensive proposition.  It might require new permits or new vessels,” says Rheault. “So, a grower would need powerful incentives to make the change.”

“Inertia is part of it, but the expense of making the change to a new gear type is often a significant barrier,” he adds. “No one is loaning us money to start a new farm or buy new gear.”

Even when a farm chooses to innovate, the process may be bumpy.  In Maine, some shellfish farmers interested in the ear-hanging technique to grow scallops have tested a Japanese drilling machine designed to automate the process.

However, the process still requires “some incredibly labor-intensive steps,” says Alex de Koning, an engineer by training, who is production manager of the bottom-culture mussel farm Hollander and de Koning.  The family operation has now purchased a new machine – the first of its kind in the US – from a different Japanese manufacturer. It is expected to arrive in the spring.

Was the time invested with the earlier technology a waste?  Says Fiona de Koning, “Innovation is an ongoing process of setbacks and learning from them to improve. I would say that is what defines a successful entrepreneur.”