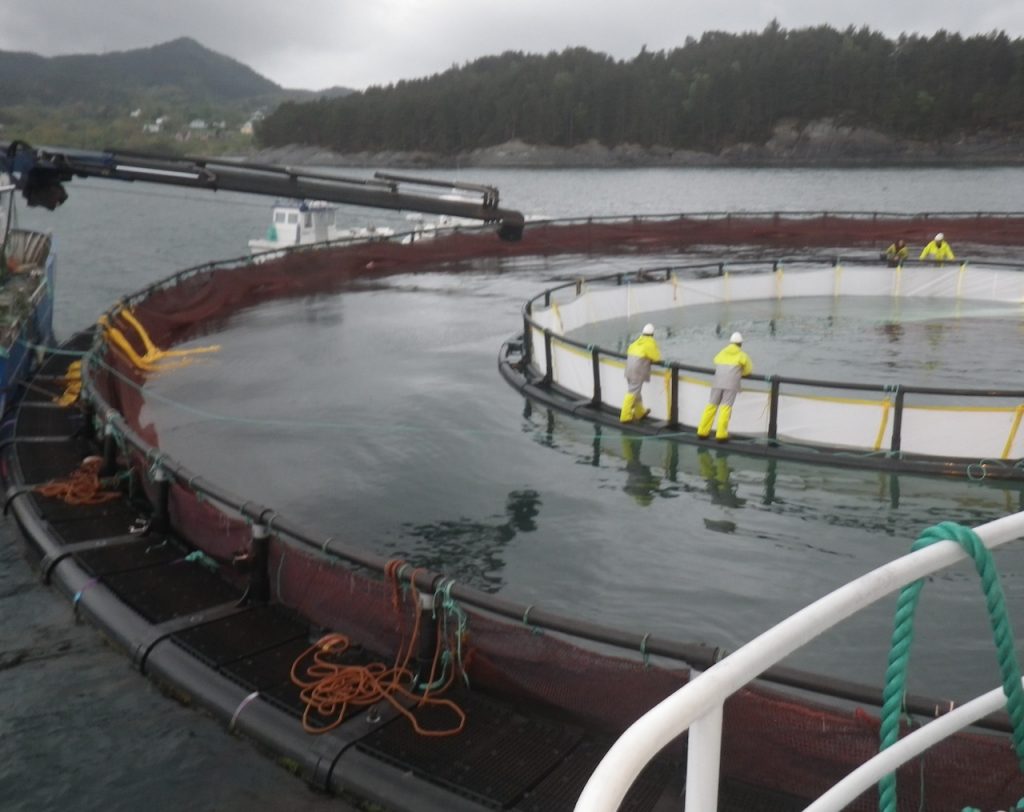 A new “snorkel cage” developed by researchers from the Institute of Marine Research (IMR) and the University of Melbourne in cooperation with Egersund Net, Norway is apparently proving effective in reducing lice-infection rates, by keeping the salmon below the shallow water that is home to lice – the “louse zone.”

At a depth of 3-4 metres inside the cage, netting is used to form a ceiling and a central cylindrical passage that extends above the surface of the water (seephoto). This snorkel is covered by a tarpaulin or plankton cloth, securing a lice-free water passage through which the salmon can swim to the surface and gulp some air to fill their swim bladder.

Geirmund Vik, research manager for Egersund Net AS, said that the technology takes its name from the corridor or “breathing snorkel.” Vik said he understands that the fish usually require the extra oxygen once or twice a day.

The work in Norway is part of the CREATE Project of the Centres for Research-based Innovation (SFI) under the Research Council of Norway and comes under Dr. Frode Oppedal, a research scientist with the Institute of Marine Research (IMR), with hosting by SINTEF Fisheries and Aquaculture.

“This method is extremely promising. It is a preventive, non-chemical approach adapted to the natural behaviour of the salmon and may be suitable for use in most fish production facilities,” Dr Oppedal states in a release from the Norway Research Council.

Prototypes tested last summer saw the incidence of salmon lice decrease by 80-84%. Autumn lice counts of harvest-age fish showed as much as a 72% decrease in the quantity of salmon lice in snorkel cages compared with open systems.

Of concern is that in at least one of the trials there was a decline in the growth rate of the fish of 33% below that achieved by the fish in non-snorkel cages.

Vik said that this probably because the bio-fouling of the net roof of the fish pen, had a mesh size so small that feed was catching on it and not going through to the fish. This can be easily overcome, he adds. The beauty of the snorkel technology is that fish can be fed outside the snorkel or, inside and directly below the snorkel corridor.

Vik said that the so-called danger zone for fish to encounter lice larvae, bacteria and viruses appears to be the top two to four, maybe six metres. Trials in Norway this summer will test ten full-scale (160-metre) cages from Egersund Net at two sites. The goal is to find a lice-free zone where salmon will thrive.