Standish Allen: The man behind the all-season oyster 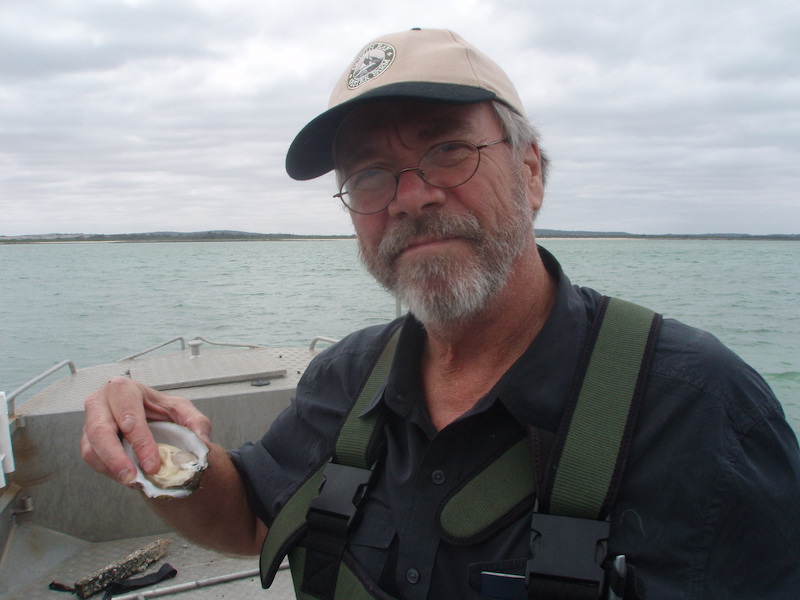 The triploid oyster has had a significant impact on oyster aquaculture in North America, and indeed, the world.  As a sterile animal, the triploid does not put energy into summer spawning.  This means they tend to reach market size faster and they also keep the taste and texture suitable for summer harvest.  If you eat a fresh oyster outside the “R” months, most likely it’s a triploid.

Oysters have two sets of chromosomes, making them diploids. Standish Allen Jr invented the triploid, an oyster with an extra set of chromosomes. Indeed, he actually invented it twice, using two different methods. This work could be seen as the centerpiece of his career.  But the Director of the Aquaculture Genetics and Breeding Technology Center (ABC) and Professor at the University of Virginia Institute of Marine Science (VIMS) says it has been the practical use of the technology that he is most proud of.

“What has been the most enjoyable for me is a never ending and changing application for a technology that I was so formative in developing,” says Allen.  “The constant renewal of the field has been wondrous, frankly.”

The “field” Allen talks about is polyploidy, the study of organisms with multiple sets of chromosomes.  “It’s the thing I’ve been beating for 40 years,” he says.   And it has been quite a journey.

For Allen, aquaculture is a means of combining his study of genetics with his love of being a “bucket biologist.”

“Rather than just doing the science, it is really the application of the science that most intrigues me,” Allen says.   “To begin with, it was to make a polyploid because that hadn’t been done. Then it was: once you have a polyploid, see if it has the practical value that you said it had when you wrote the grant application.”

Allen calls that early work the “induced triploid era.”  He found that if he added the chemical cytochalasin B at the right moment after an oyster egg was fertilized, the egg would keep an extra set of female chromosomes while still adding one set from the male sperm.  The result was an oyster with three sets of chromosomes that was sterile.

Field trials showed that Allen had developed a faster growing, all-season oyster.  But oyster growers in Maine were just getting started and didn’t show a lot of interest.

Allen went out to the University of Washington in Seattle for his PhD in 1983 and worked with Pacific salmon.  “I kind of swore off oysters,” he says, but he soon discovered there was a significant oyster culture industry in the state and they were interested in triploids.

“I had a Sea Grant funded,” Allen recalls. “We were able to make a triploid version of the Crassostrea gigas (the Pacific oyster), put them in the field and see how they would grow. At that time nobody had triploids and their behavior in the field was only theoretical.”  Allen and colleague Sandra Downing also worked with commercial hatcheries to implement this bench-top technology and see if they could get massive quantities of triploids produced on commercial scale.

They were successful.  But the writing was on the wall for the inductive method.  Cytochalasin B is considered carcinogenic and the FDA was pushing to halt its use. Other techniques, such as hydrostatic pressure, temperature extremes, and the use of an enzyme inhibitor were equally cumbersome and unreliable.

While he was out in Washington, Allen started to hear about a Chinese doctoral student, Ximing Guo, who was working to develop tetraploid oysters because of the potential value they would have in breeding triploids.

If a tetraploid (four chromosomes) could be crossed with a diploid (two chromosomes) the triploid offspring would have three.  But you had to make the tetraploid oyster first.

Back on the East Coast in the early 1990s while Allen was an Assistant Professor at Rutgers University, he was able to hire Guo as a post doc. With some irony, they used a failed version of first invention (the ‘induced triploid’) to create the second invention, to spawn the third.

A fertile triploid is a contradiction in terms, yet they do exist.  Gou and Allen were able to find fertile triploids, which would accept the same chemical induction process they used to create them, to add a fourth chromosome.   And thus in 1993, a tetraploid oyster was created and could then be reproduced through regular breeding techniques to develop sufficient numbers of broodstock for commercial application.

Tetraploid broodstock is now licensed in the US, France and Australia to breed triploids. Allen is quick to point out that it is not an all-in-one solution; triploids are just one of the many options breeders have when working with oyster stocks. And Allen has several of these options in his “tool kit,” thanks to his research and outreach efforts with other groups.

Rutgers University hired Allen to fill the position vacated by an icon in the oyster world, the late Dr Hal Haskins.   “He had been one of the early scientists who discovered MSX disease and he left behind this genetic legacy of lines of oysters that showed resistance. I essentially was being hired to be the curator of those and continue them on,” Allen explains.

In 1997, Allen arrived at VIMS as ABC’s first director. An initiative of the Virginia legislature, ABC was founded to address “the endemic problems of MSX and Dermo disease in oysters,” among others. The problem was, the oysters had all but disappeared.

“When we started ABC, there was no industry at all,” Allen says. “So what’s happened since has in the most part been enabled by the increased productivity of the broodstock we have developed.”

They worked with disease resistance first.  “Without the resistance to disease traits, the triploid would be useless,” Allen points out.

They then went on to improve other traits important to the industry such as shape, growth rate, and meat content.   The inclusion of triploidy adds another four-season value.  “Now we have an oyster (Crassostrea virginica or eastern oyster) that is quite suitable for the Chesapeake Bay.”

Allen says 90 percent of cultured oysters in the Chesapeake Bay are triploids.  “They just do so well in the food-rich estuarine growing conditions,” says Allen. “They are less affected by the 80 degree summer water temperature.  Growers are choosing them because it is helping their business.” For Allen, that is a good way of “closing the loop for his career.”