Blue Ocean Mariculture, a fully-integrated facility in Kona, Hawaii sets itself apart in the aquaculture industry for two reasons: the company is the only offshore open ocean farm in the United States and was a first-mover in farming Almaco jack (Seriola rivoliana). 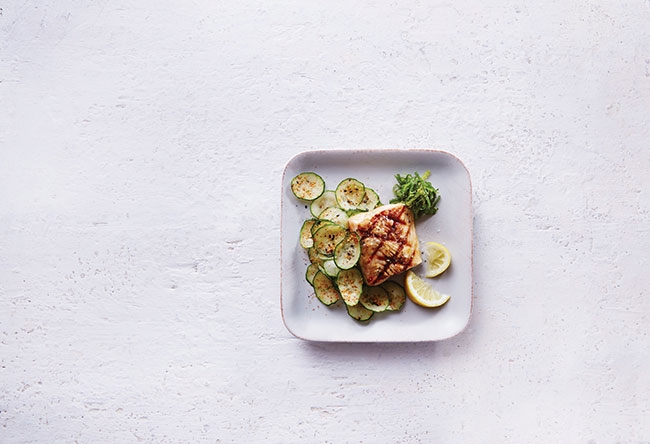 The decision to farm Hawaiian Kanpachi was a no-brainer for the company – the species can be grown in the waters off Kona throughout the year. “This is important to good fish health and steady growth and it allows our customers to have a consistent, year-round supply,” company president Todd Madsen explains. Markets for the fish are also well-established, he says, allowing the firm to focus on the benefits of Hawaiian Kanpachi instead of “proving” a new fish to the market.

The company got its start in 2010 by acquiring the offshore farming lease of a firm that was going out of business. “Our first major step was to fix the feed formulation problems introduced by the previous operator and their feed supplier,” says Madsen. “Once the fish were healthy and offshore production was stabilized, we worked with the State of Hawaii to expand the permitted capacity of the farm.” The firm recently modernized and expanded its hatchery facility and offshore infrastructure.

Blue Ocean claims the species has a distinctly fresh and sweet flavour that shines through with a clean richness when cooked. Its firm texture allows it to excel in sashimi presentations. It’s easily and efficiently cut, with few bones and a small bloodline. Favorite product forms include the loin (sashimi, nigiri sushi, ceviche or poke), fillet (grilled, steamed or broiled), and whole collar (roasted). Its name derives from the fact that when young, the fish have distinctive bands over each eyes that look similar to the Japanese symbol for the number eight (‘kan pachi’ in Japanese means ‘center eight’).

“It is a beautiful animal: compact, muscular, a beautiful silver colour and the flesh is a soft white and pink,” Madsen says, adding this was another reason the species was chosen for culturing.

Blue Ocean sells its fish throughout Canada and the USA to top chefs in high-end restaurants, including many Japanese restaurants. “Our largest markets include Hawaii and major culinary centers such as San Francisco, Los Angeles and New York City,” says Madsen. “Our fish are harvested at six to eight pounds and the majority are sold fresh, reaching our chefs and retail customers 24 to 48 hours after harvest.” Madsen says he and his team have learned that the fish is much more versatile than they have believed. There is much more to Hawaiian Kanpachi than sushi and sashimi, he notes, and is pleased that innovative chefs are creating “amazing new dishes” with the fish in both raw and cooked formats.

Sustainability
Environmental stewardship is at the company’s core. After eggs from local broodstock are fertilized (there is no pressure on wild populations for eggs), the juveniles are grown in the hatchery and transferred offshore to five fully-enclosed net pens, each 8,000m3. Surrounding these pens, Blue Ocean monitors key ocean water quality parameters through partnerships with state and federal agencies to make sure farm effluent stays below the carrying capacity of the surroundings. Staff also analyzes benthic samples to make sure the farm does not change the nature of animal populations in the local seabed. In addition, Blue Ocean observes behaviour of marine mammals and seabirds at the farm, looking for any changes.

Madsen believes there is growing awareness among consumers that more marine seafood cultivation is required in order to ease the pressure on capture fisheries and provide a more sustainable alternative to terrestrial proteins. “There’s also growing recognition that aquaculture can be conducted in ways that are not harmful to the environment, and in some cases even complementary,” he observes. “We think our operation is an example of how to do aquaculture in a responsible and symbiotic manner.”

Madsen believes the outlook for marine aquaculture is very positive because technologies continue to advance and the need for more marine-based proteins is clear. “Of course, there are agendas out there in opposition to industry growth,” he notes, “but the underlying health and sustainability advantages that marine proteins have over terrestrial proteins will eventually carry the day.”

Outlook
The expansion of Blue Ocean is on the horizon. “We plan to continue to develop our existing permitted lease area over the next few years,” says Madsen. “We are also evaluating other local species such as Pacific threadfin (Polydactylis sexfilis) for commercial production.”

However, it’s been a big challenge for Blue Ocean to find qualified commercial hatchery and production staff. Madsen points out that the US aquaculture industry is not as developed as it is in Europe or Japan, particularly for marine species, and he would like to see more aquaculture training in the USA, not just research projects. “It would be helpful to have more guidance from government and regulatory agencies around how and where the offshore aquaculture industry should develop,” he adds. “There’s general agreement that the US should produce more marine-based protein, but given the competition for marine resources, it would be helpful to have a clearer development plan with targeted locations and species.”