Aquaculture 2019, the recently concluded international aquaculture conference in New Orleans, has been deemed a resounding success by the Conference Steering Committee, the Conference Manager, and most of the attendees. 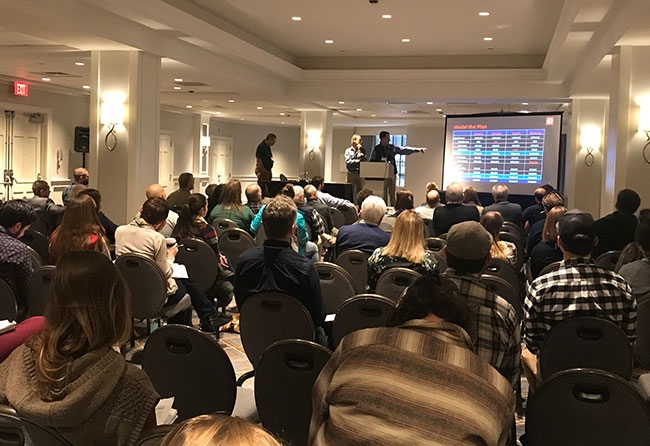 The number of attendees, approximately 3,500, was highly satisfactory especially given an array of travel restrictions on foreign participants imposed by American authorities.  The fact that attendees came from 85 nations is remarkable. The number of exhibitor booths, at 205, was a strong vote of confidence by the business community that supplies fish producers and the aquaculture industry.  Over 1,000 speakers and/or posters (as many as 1,350 by some counts) and over 100 technical sessions presented summaries of ongoing studies, completed studies, and issues facing aquaculturists.

My thoughts about Aquaculture 2019 are, unfortunately, not based on personal experiences but on feedback from the conference organizers, my colleagues at this publication, and my friends in the industry who attended the event. My wife’s health issues and forecasts of bad travel conditions between Arizona and New Orleans prevented us from driving to New Orleans and participating in the event this year.  Also, I want to claim that my personal experiences with conferences, especially in organizing Triennial aquaculture conferences, dating back to the 1980s, provide me with valuable insights for evaluating such meetings.

When Dr. Nick Parker and his colleagues, especially those in the Fish Culture Section of the American Fisheries Society, first envisioned the “Inter-galactic Fish Farming conference” that became the “Triennial” conference, the vision was a little different from the 2019 conference.  In 1983, a relatively small conference in Washington, DC attracted several hundred people with a program focused on finfish and the opportunity to trek over to Capitol Hill and visit members of Congress who might be interested in aquaculture. The National Shellfisheries Association was thought to be a logical partner and has proven its value over the years since.  The National Aquaculture Association was only a dream in the minds of Joe McCraren and several fish farmers until 1989.  The World Mariculture Society had been established in 1969, but was still very small and had not yet transitioned into the World Aquaculture Society–a development that occurred in the 1980s.

By 1995, when John Cooksey was selected as Conference Manager, the Triennial in San Diego was organized by the Fish Culture Section, National Shellfisheries Association, and the World Aquaculture Society.  A special effort was made to attract private sector fish farmers, especially California fish farmers, but the National Aquaculture Association was not a formal partner.  A world renowned keynote speaker and a diverse technical program attracted over 4,000 attendees from countries around the world, but the trade show, although bigger than the shows in 1989 and 1992, was smaller than the 200+ exhibitors attracted to New Orleans this year.  The program was designed to attract experienced aquaculture professionals and was limited to no more than eight presentations in any time slot. The total number of presentations was considerably smaller than the numbers for 2019.  The 1998 Triennial in Las Vegas was designed along the same pattern and attracted similar numbers of attendees–over 4,000.

Over the last 20 years conference organizers have accepted a harsh reality: the surest and simplest way to generate conference attendance is by offering attendees the opportunity to speak. Speakers rarely fail to attend and their employers are more likely to sponsor the costs when a presentation is the reason for a request to attend. Unfortunately, this strategy comes at a price.  The number of presentations becomes difficult to manage efficiently and the quality of presentations declines.  The technical program in New Orleans had as many as 15 concurrent sessions and they had to be scheduled in rooms of marginal size, quality, and accessibility.  Attendees had difficulty moving from one session to another.  Also, presentations on closely related subject matter ended up being scheduled at the same time.

As the size of the Triennial conferences has grown into the range of 3,000 to 4,000 attendees and 175 to 200+ booths in the trade show, the number of conference venues that can accommodate the conference has become limited.  The selection of venues is limited further by the need to avoid busy work seasons for the producers of aquaculture products.  An additional reality is the need to schedule the conference in a city offering attendees attractive entertainment outside the conference.  The Triennial now seems locked into a rotation of New Orleans, San Antonio, Las Vegas, and San Diego for meeting sites.  Although the hotels and conference centers in these cities are certainly adequate, each one has a few negative features that lead to complaints from attendees.

I first attended a national/international technical-professional conference over 50 years ago.  Since that time, I have attended more conferences than I can recall, and none of them was considered to be “the perfect conference.” Perhaps, just perhaps, the 1995 Triennial in San Diego, and the 1998 Triennial in Las Vegas came close.  Attendees at the 2019 Triennial in New Orleans considered it to be a good conference, probably above average.

Related
Federal playground politics and the aquaculture industry
Why not walleye?
Robo-ships specialist attracts investors
AquaBounty: Obstacles many, but high on hopes
Tags